To each his own

Scots, Basques and Catalans all want their own states; in Belgium, the Flemish and the Walloons may split. The drive for independence across the continent is a centrifugal counterforce to greater European integration. 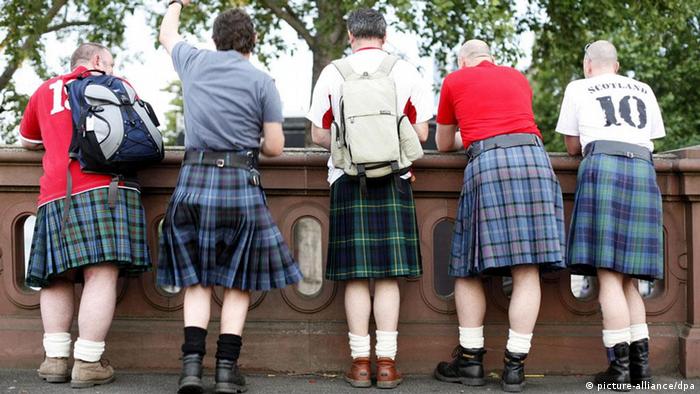 "Rule, Britannia - but not here!" A similar phrase could be the slogan for the Scottish independence movement. After more than 300 years as part of the United Kingdom, the Scots may cast a vote for independence as early as 2014.

British Prime Minister David Cameron and Scottish nationalist leader Alex Salmond signed an agreement Monday (15.10.2012) to finalize arrangements for a possible referendum. With their desire for independence, the Scots are in good company in Europe. 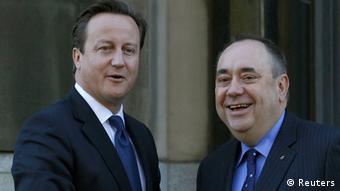 In particular, a number of Europe's economically strong regions are looking to go their own way. According to the EU statistics office, Eurostat, the independence-minded regions of Catalonia and the Basque Country, in Spain, were responsible for nearly a quarter of the country's gross domestic product (GDP) in 2009, despite making up less than 10 percent of Spain's land mass. The prosperous Italian north - with Southern Tyrolia and the metropolitan areas of Milan and Turin - no longer wants to finance the economically depressed south. And the Scots would rather keep the revenue from North Sea oil to themselves.

The situation in Belgium is especially serious where Flemish separatists have become increasingly vocal in their desire to detach themselves from the French-speaking south. Flanders only makes up about a third of Belgium's land mass, yet it contributes nearly 60 percent to the country's GDP.

Many reasons for autonomy

Setting aside the economic reasons, the desire for independence can be linked to a host of other arguments, according to Silke Göttsch-Elten, an ethnologist at Christian-Albrechts-University in Kiel. Whether "language, history or culture," they are all aspects of a common identity, said Göttsch-Elten. Religion can also play a large role, as can geography - for example, if a region is located at the edge or near the center of a country. 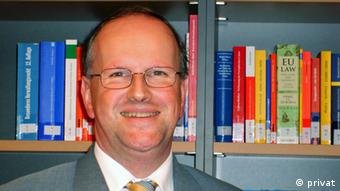 Hillgruber does not expect Europe's independence movements to lead to war

Above all, the independence movements in Europe's West and South want to preserve their own ethnic identity. But that desire alone, under international law, does not give them the right to secede against the will of the mother country, according to Christian Hillgruber, a law professor at the University of Bonn.

"For the most part, experts on international law agree on this fact - unless there has been a gross violation of human rights such as genocide, as was the case in Kosovo," said Hillgruber. In the 1998-1999 struggle between Serbian troops and the Kosovo Liberation Army, tens of thousands of people were killed in what was then a part of Serbia.

By contrast, the breakup of the former Czechoslovakia in 1993 was markedly different. The split into the Czech Republic and Slovakia was accomplished by a mutual agreement, and resulted in a peaceful and calm transition into two independent states.

A bit of independence

Although the drive for independence has been marred by violence in countries like Spain and Ireland, Hillgruber does not expect the movement in Europe to feature serious turmoil, like the wars of independence in places like Eritrea, East Timor, or Sudan.

But should a European region, like Scotland, gain independence, Hillgruber expects difficulties of a completely difference nature. "Independence would, of course, require plenty of discussion over the consequences of such a 'divorce,' particularly the redistribution of assets and debt," he said. "Scotland would not be granted independence without first agreeing to shoulder some of what the United Kingdom owes."

Bearing that in mind, the Scots may be happy to settle for more economic independence, instead of a complete separation.

Linguistic and cultural splits run deep despite changing demographics in Belgian communities. The rise of nationalist parties is also playing into the lead-up to Sunday's municipal elections in Belgium. (12.10.2012)

Scotland’s planned referendum on independence has inspired an upsurge of nationalist sentiment in the Spanish region of Catalonia. Spain's financial crisis is proving a potent engine for the Catalan demands. (17.02.2012)