Tiny Smart Car to Challenge Giants in US Market | Business | Economy and finance news from a German perspective | DW | 29.06.2006

Tiny Smart Car to Challenge Giants in US Market

DaimlerChrysler's midget Smart car will take on the US market in 2008, with executives hoping the nimble microcar can out-manoeuvre rivals in the land of the mammoth sports utility vehicle. 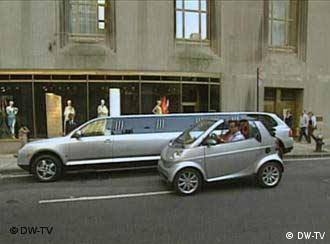 Can the Smart compete against big cars on US streets?

The German-US automaker said Wednesday it will launch the car through a partner -- a company headed by racing legend Roger Penske -- in early 2008. High fuel prices and positive responses from consumers drove the decision.

But DaimlerChrysler chairman Dieter Zetsche said the Smart -- which will be offered in three models in the world's largest automotive market -- can hold its own against US muscle cars.

"Times have changed, and urban US streets are becoming increasingly congested," Zetsche told reporters during the announcement.

"Gas prices are also increasing, and we may never see cheap gas again," he added.

Some Smart cars are already sold in the US through unofficial resellers, but Wednesday's announcement designates automotive retailer Penske's UnitedAuto Group as the official distributor for the Smart in the United States and Puerto Rico.

Smart cars have been on European roads since 1998 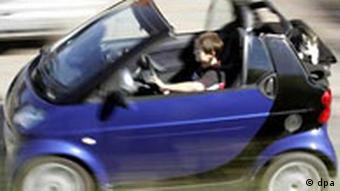 Some have likened the Smart's appearance to a baby shoe

DaimlerChrysler officials hope to promote the urban microcar as offering a fun driving experience, and have been able to place the vehicle in movies like "The Da Vinci Code," where it was used in a chase scene in Paris, and the remake of "The Pink Panther" starring Steve Martin as Inspector Clouseau.

"The time has never been better for this -- and I am convinced that the Smart Fortwo as an innovative, ecological and agile city car will soon become just as familiar a sight on the streets of New York, Miami or Seattle as it is today in Rome, Berlin or Paris," Zetsche said.

The Smart brand, which was launched in 1998, has been a laggard for the automotive conglomerate, and the decision over whether to launch the brand in the largest auto market was heavily debated.

The additional sales volume could help Smart meet its target of achieving profitability.

Zetsche said there was never any doubt over whether Smart would enter the US market, pointing out that the next-generation Fortwo was always designed to meet the safety and crash regulations established in the United States.

The issue that needed to be finalized before the announcement was the distribution plan, which will be handled exclusively by UnitedAuto, part of a company headed by Penske with dealers in 20 states.

The distributor said it would select between 30 and 50 dealers in major urban US markets, along with a few select leisure markets.

While expecting to sell the Fortwo at less than 15,000 dollars per unit, Penske would not comment on volume targets but noted Smart's recent success in Canada, where the brand was expected to achieve 1,500 units in its first year but ended up achieving more than 4,000 sales.

The Smart car would be among the least fuel-hungry cars on the road. The company says it goes about 90 kilometers (56 miles) per gallon (3.8 liters). That translates to consumption of 4.2 liters per 100 kilometers.

Think of road safety, and chances are you imagine a seatbelt. But these days, manufacturers are looking to higher tech solutions, like computers, sensors and wireless technology, to help keep drivers from harm. (Sept. 20, 2005)

Although Germany might be lagging a little on the international research and development stage, when it comes to the evolution of the automobile, the nation is keen to be in pole position. (Mar. 1, 2006)

DaimlerChrysler CEO Inclined to Launch Smart Car in US

Automaker DaimlerChrysler is considering whether to introduce its mini "smart" cars onto the American market. (Feb. 27, 2006)