Tinnitus: Electrical stimulation of the tongue can help | Science | In-depth reporting on science and technology | DW | 23.02.2021

Distressing ringing noises in the ears are often treated with cortisone. Now, a German researcher is remedying the problem by stimulating people's tongues. 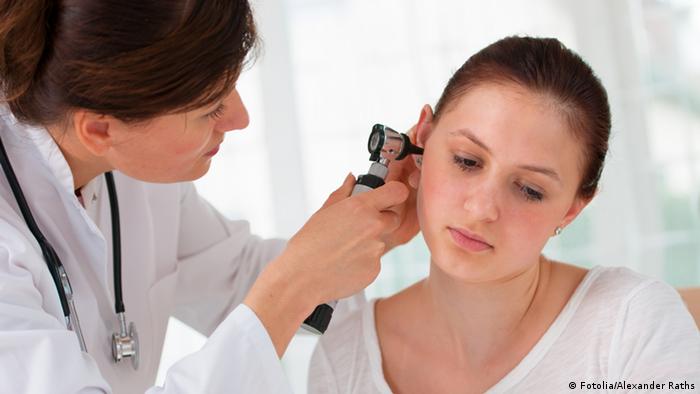 Tinnitus affects millions of people and is more prevalent with age

Millions of people worldwide suffer from hearing annoying noises in their ears, which can take the form of high-pitched whistling, chirping, hissing, ringing or buzzing. This phenomenon, known as tinnitus, can be a great strain for those affected, particularly when it has troubled them for a long time, and can result in sleep disorders or even depression.

Such ringing in the ears is brought about by some kind of disturbance of the ear or of the hearing system. But surprisingly enough, researchers have so far failed to find any clear explanation for the phenomenon.

In humans, sound waves are caught by the cochlea, which contains the sensory organ of hearing. Here, sensory cells convert the physical stimuli in such a way that the auditory nerve can pick them up in the form of electrical signals and transmit them to the auditory center in the brain.

In the brain, this information is then appropriately sorted, and the sound impressions are decoded. The brain can immediately filter out disturbing stimuli. The psyche also plays an important role in this process: It also determines whether or how we hear or perceive something.

If this highly complex interaction is disturbed, what is heard is passed on incorrectly. The nerve cells do not react, or overreact, to compensate for the resulting hearing loss.

The ear: a sensitive organ

Cortisone is the common treatment

The usual treatment for tinnitus, such as that which occurs after an acute hearing loss, is the high-dose administration of cortisone. The steroid drug is usually given in tablet form, as an injection or as an infusion. The cortisone is intended to reach the middle ear via the stomach or the bloodstream and stimulate blood flow.

However, it is not known how exactly cortisone affects tinnitus. Both circulatory and immunological effects have been put forward as possible explanations, as well as cortisone's anti-inflammatory and decongestant qualities. This is why researchers have been testing for years whether the introduction of cortisone by an injection through the eardrum into the middle ear could be more effective than internal administration by means of infusions or tablets.

Alternatively, doctors have used cognitive behavioral therapy approaches to train sufferers to consciously ignore the agonizing tinnitus sound. A type of music therapy has also been used in which tinnitus sufferers try to sing or hum the annoying tinnitus sound themselves.

The unusual therapy approach of neurologist Berthold Langguth, head of the Regensburg Tinnitus Center,  is along similar lines: With the help of sounds and electrical impulses,  he gently reprograms the brain and can thus weaken the annoying ear noises.

For years, researchers have also been trying to use electrical stimulation of the tongue to supply the hearing center of the brain with additional information and thus regulate the development of tinnitus in the brain.

Hearing impairment causes defective nerve cells to become more sensitive and active. "When the auditory system no longer perceives certain frequencies, it compensates by reacting more strongly in the range of these frequencies," Langguth explains. In other words, the brain tries to compensate for the missing information from the ear and creates the agonizing noises of tinnitus instead.

Impaired hearing - what can help?

Connection from the tongue to the brain's auditory center

This is the starting point for Langguth's approach. Since there are many different forms of tinnitus, the tinnitus tone is determined individually for each patient. The patient then hears tones and noises from this frequency range via headphones, while the neurons, or nerve cells, of the tip of his or her tongue are stimulated with small electrical impulses. This is because, amazingly enough, some nerve pathways lead from the tongue directly to the center in the brain where auditory perception takes place.

The electrostimulation device is reminiscent of a cell phone, to which are attached headphones and a kind of toothbrush with contacts that patients place on their tongue.

The electrical stimulation gives the overactive tinnitus neurons signals to "settle down." That may sound a bit strange, but it seems to work. In a study of 326 subjects, the troublesome ringing in the ears diminished in about 80% of the participants, who had stimulated their hearing themselves for an hour a day for 12 weeks.

The noises disappeared for some, and the subjects were able to sleep and concentrate better again. And in three-quarters of the subjects, these positive effects were still there a year after the end of therapy.

For the clinical study,  the subjects were divided into three groups, each of which was stimulated with different tones. However, there was no placebo group in the trial. The best results were in the group in which the frequency range was close to the tinnitus tone.

It is true that a few patients experienced temporary irritation of the oral mucosa. But according to Professor Langguth, the test subjects surprisingly did not find the electrical stimulation of the sensitive tip of the tongue too unpleasant. "I was amazed at how well the patients tolerated it. Of course, it is important that the stimulation does not become too intense," says the neurologist.

Devices for correspondingly gentle, wireless tongue stimulation are now to be developed for this unusual therapeutic approach.

We speak with the head of Berlin's ENT and Hearing Center about acute and chronic tinnitus. What triggers these troublesome noises in the ear, how can they be treated and what complications can arise?

Out of nowhere, a random odor can send you hurtling back to a childhood memory, and you won't know why. Smell is one of our most powerful senses, and it's powerfully under-researched.

Our ability to smell gets worse as we age, and a new study from Germany suggests this could have a negative effect on how our bodies process food. One caveat: The experiment didn't involve humans, but thousands of worms.