Time to end interview authorization in Germany? | Germany | News and in-depth reporting from Berlin and beyond | DW | 19.01.2016

An interview with Wolfgang Schäuble printed last weekend in a German newspaper took 66 hours to be approved by his press office. Many German journalists think it's time to end the tyranny of quote authorization. 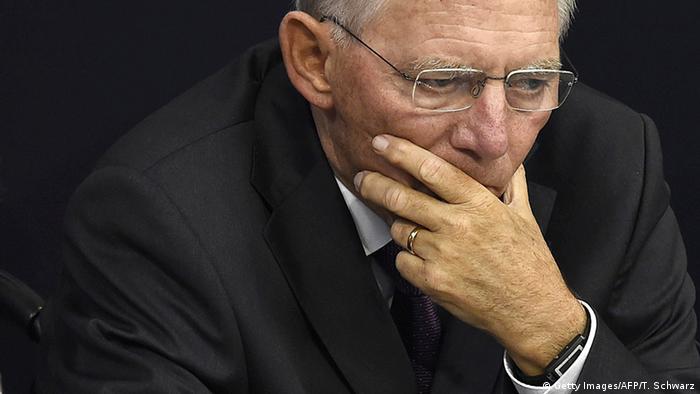 Matthias Müller, the CEO of Volkswagen, probably knew his trip to the US would not be easy. The auto giant he took over in September has an $18-billion (16.5-billion-euro) potential fine hanging over it for breaking US law by cheating on its emissions tests, and he is on a mission to both limit the damage to the company's reputation among American consumers and engage in tricky negotiations with the US Environmental Protection Agency.

In this context, the radio interview he gave to US network NPR earlier this month could probably have gone better. "Frankly spoken, it was a technical problem," Müller said, giving the impression, as the interviewer pointed out, that VW's crimes had been accidental. This is probably not a line the US authorities would like to hear from VW, considering the scale of the evidence of wrongdoing in the company.

Indeed, after the interview had aired, the VW press department duly contacted NPR and asked to record a new interview. "I have to apologize for yesterday evening because the situation was a little bit difficult for me to handle in front of all these colleagues of yours and everybody shouting," Müller began on his second attempt, before adding contritely, "first of all we fully accept the violation." 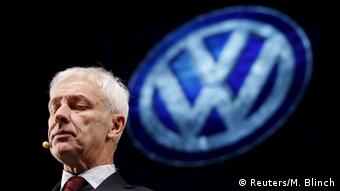 Müller left a "disastrous" impression on NPR, according to "Der Spiegel"

The German media was embarrassed for the businessman. "Der Spiegel" said Müller had "humiliated himself." The impression he had left in the US "could not have been more disastrous," the magazine said.

But despite the scorn, the German press in general was at least partially responsible for Müller's predicament. In fact, some might argue that German print journalists have allowed leading figures, like Müller, to take interview authorization for granted, leaving them ill-prepared for the unforgiving directness of journalistic practices elsewhere.

A recent article in the "Süddeutsche Zeitung" provided some insight into the complicated authorization process that German print and online outlets routinely acquiesce to (full disclosure: as does DW on occasion). The paper, one of the most respected in Germany, conducted an hour-long interview with Finance Minister Wolfgang Schäuble on January 12, but had to go through a three-day email exchange with his press team before the minister's words were finally considered to mean what he wanted them to mean.

The final refinement, which according to the SZ arrived three hours before the Saturday edition of the paper went to print, altered a single word - "will" became the more ambiguous "would." The article caused some discussion among German journalists on social media.

Markus Hesselmann, online editor for the "Tagesspiegel" newspaper, posted the article on his Facebook page along with the comment, "It's an important step for this to be publicly discussed. Most readers don't know about these linguistic games at all. Next step: abolish authorization."

As a journalist who has previously worked in the UK, Hesselmann is perhaps more aware that German reporters are letting themselves be cowed by the concern that if they refuse authorization, they will lose access. "I think we should do it for the sake of a journalism that can only survive if it is as independent as possible," he said. 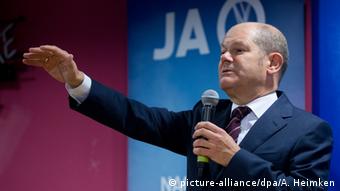 Olaf Scholz demanded a host of changes to his 2003 interview

Hesselmann is not the only one disgruntled at the practice. In 2003, the "taz" newspaper famously published an interview with Olaf Scholz, then general secretary of the Social Democratic Party (SPD), with all his answers blacked out because his press team had asked to rewrite everything he had said. The paper's editor-in-chief Bascha Mika condemned the politician's behavior as a "betrayal of the claim to a free press, a betrayal of the journalist's self-definition, a betrayal of the reader."

The German Federation of Journalists (DJV) does offer guidelines on the matter. In a brochure published in 2010, it said that while authorization could be legally important - since the interviewee has technically co-authored the copy - the authorization must be limited to factual or linguistic correction. But if any changes threaten the authenticity of the interview or contradict any significant statement within it, the editors have the right to refuse to make them.

It is a debate that re-surfaces frequently among German reporters - many argue that authorization has its own advantages, because it can help to clarify ambiguities and guarantees that an interviewee can no longer claim he or she was misquoted.

For her part, Cerstin Gammelin, who wrote the behind-the-scenes SZ article on the Schäuble interview, doesn't think her colleagues are likely to drop the practice. "I don't see any signs that the habits in Germany are changing," she told DW. "I think what is bad about authorization is that journalists become dependent on the 'OK.' That means it becomes slightly more controllable for the interviewee." But she also added: "The benefit is that under certain circumstances misunderstandings can be prevented."

While most automakers saw their 2015 sales grow by double digits, demand for Volkswagen cars slowed as many new buyers turned to other brands following the company's pollution cheating scandal. (15.01.2016)

German Finance Minister Schäuble has said VW's scandal is about "greed" but does not fear for the German market. His comments come ahead of VW's executive meeting to examine the findings from an internal investigation. (30.09.2015)