Three Civilians Shot Dead at German Checkpoint in Afghanistan | Germany | News and in-depth reporting from Berlin and beyond | DW | 29.08.2008

An Afghan woman and two children were killed and four other children injured as German soldiers opened fire on a civilian vehicle in the northern province of Kunduz, Afghan police said Friday, Aug. 29. 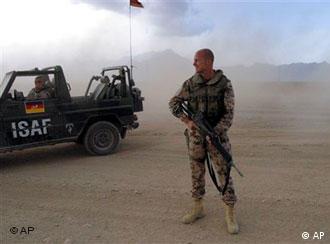 The forces opened fire when the vehicle escaped from the checkpoint

"When the vehicle did not stop after several signals, the German forces opened fire at the car," Aqtash said, adding, "When the forces later checked the vehicle, they found two children and a woman dead and four other children wounded in the vehicle."

German, Afghan National Army and Afghan police forces installed the checkpoint in the area after receiving information that a vehicle would smuggle drugs into neighboring Takhar province, he said.

"First, a vehicle approached the checkpoint but escaped when the forces tried to stop it," Aqtash said. "The forces opened fire at the second vehicle, which was driving behind the first one and did not heed repeated signals by the forces."

On Wednesday, a German soldier was killed in a roadside bombing in the Chardara district of Kunduz province. Three others were injured when a remote-controlled bomb blew up their armored vehicle.

More than 3,500 German soldiers are serving in the ISAF and are mostly stationed in northern provinces. The ISAF has about 53,000 soldiers from about 40 countries in Afghanistan.

Bureaucracy is hampering and even stopping the flow of German aid to Afghanistan, according to Green politician Alexander Bonde. But the German development ministry have denied his claims. (18.08.2008)

Weblogs have become very popular among soldiers, but military strategists worry that the Internet diaries won't just damage the troops' reputation. They're also concerned that they might threaten soldiers' lives. (24.08.2008)

Putting a halt to terrorism and promoting democracy must be at the top of the agenda for Pakistan's next president, Germany's foreign ministry has said in the wake of Pervez Musharraf's resignation. (18.08.2008)