Thousands of people have gathered in northwest Pakistan to protest against drone strikes. The demonstrations blocked a NATO troop supply route used to transport supplies in and out of Afghanistan. 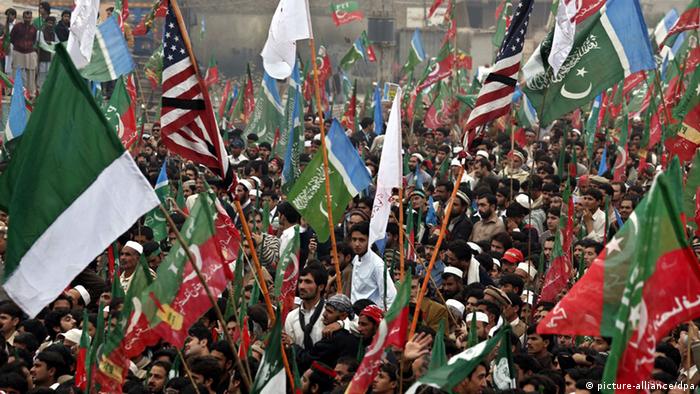 About 10,000 people gathered on a road in Khyber Pakhtunkhwa province on Saturday in a rally led by cricketer-turned-politician Imran Khan. Protesters shouted anti-US slogans, including "Down with America" and "Stop drone attacks."

The event was jointly organized by Khan's Tehreek-e-Insaf (PTI) - which has called on the Pakistani government to take a harder line against US drone strikes in the country - and the party's junior coalition partners in the province: the Jamaat-e-Islami party and the local Awami Jamhoori Itehad party.

"We will put pressure on America, and our protest will continue if drone attacks are not stopped," Khan told the protesters, who blocked a NATO supply route. The supply interruption, however, was seen as largely symbolic as the road sees little NATO traffic on Saturdays.

After the demonstration, the PTI put out a statement announcing that the party would begin stopping trucks carrying NATO supplies through Khyber Pakhtunkhwa indefinitely starting on Sunday evening.

Drone strikes are an increasing source of tension between the US and Pakistan. Just two days before Saturday's protest, a US drone killed five people, including at least three Afghan militants at an Islamic seminary in Khyber Pakhtunkwa.

Experts say that instead of expressing anger and grief over the killing of the Pakistani Taliban's leader Mehsud in a US drone strike, Islamabad should use it as an opportunity to tame the Islamist militants. (04.11.2013)

Khan and other officials routinely denounce the strikes as a violation of their country's sovereignty, though the national government has supported some attacks in the past. He also accuses the US of intentionally using the strike that killed Taliban chief Hakimullah Mehsud earlier this month to derail peace talks in Pakistan. The assassination of Mehsud, which Islamabad said destroyed progress toward reaching a peace deal to end the Taliban's deadly six-year insurgency, prompted widespread outrage in the country.

Pakistan's federal information minister, Pervez Rashid, says his government's stance on drones is clear and that Khan was "playing politics" with the issue. Prime Minister Nawaz Sharif has been critical of drone strikes, which are widely unpopular in Pakistan, but has also said he values his country's relationship with the US. Sharif pushed the administration of President Barack Obama to end drone strikes during a visit to Washington in October, but the US has provided little indication it intends to stop the controversial practice.

Khan had previously set a November 20 deadline to end drone strikes in Pakistan and threatened to block NATO supply routes - something he also urged federal officials to do. On Saturday, Khan vowed to bring the drone strikes issue to the country's highest court and, if necessary, the international court of justice.

The NATO supply route in Khyber Pakhtunkhwa, which has become an important way for shipping equipment out of Afghanistan as the US winds down its occupation by the end of 2014, has been blocked in the past. Pakistan shut down the routes for seven months after US airstrikes in November 2011 accidentally killed two dozen soldiers on the Afghan border.