Thousands of people took to the streets in Bamberg on Saturday, May 24, in peaceful protests against the extreme-right wing NPD party convention in the southern German city. 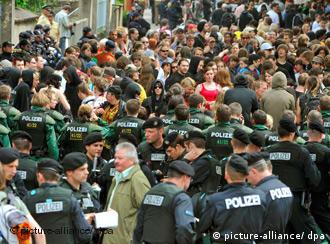 Masses turned out to express their opinions

Police said 3,000 to 4,000 people took part in the demonstrations, including a bloc of around 300 protesters they classified as being prone to violence.

Around 600 NPD delegates came to Bamberg for the conference.

Bamberg Mayor Andreas Stark, a Social Democrat, kicked off the "Festival of Democracy" with a call for a federal ban on the NPD.

"This party stokes hate and prejudices, it's racist and anti-Semitic. We, on the other hand, avow ourselves to the values of the Constitution, to freedom, tolerance and human rights," he said.

Around 6,000 people are expected to show up in Bamberg to demonstrate against the NPD over the weekend.

The local council had appealed unsuccessfully to the courts to prevent the party convention from taking place in Bamberg, and was forced to rent the city's convention center to the extremists for the two-day function.

The focus of the convention is the election a new party chairman. It was unclear whether incumbent chair Udo Voigt would run unopposed or not.

The German government has drafted a bill that would put an end to tax benefits for extremist groups. The move is intended to put pressure on the far-right NPD party, according to a German newspaper. (03.05.2008)