Thailand's crown prince has led a mass cycle event through Bangkok in honor of his father, the ailing King Bhumibol Adulyadej. The "Bike for Dad" celebration comes amid a crackdown against critics of the monarchy. 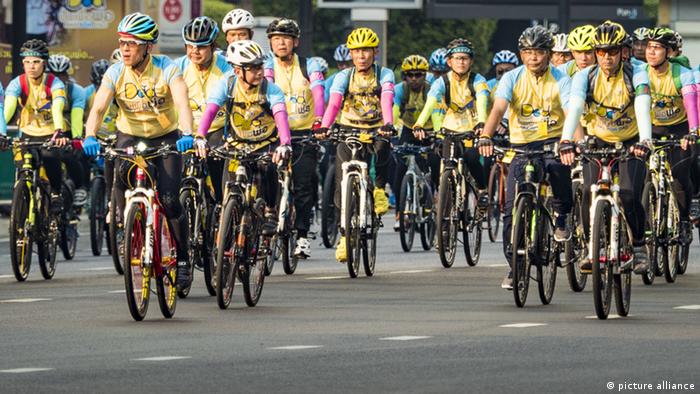 Some 100,000 people turned out in Bangkok on Friday, organizers said. Top military and political leaders also joined the procession of bike riders in the Thailand's capital.

"Many people want to share this moment to send a sign to our king that we all love him very much," said 44-year old Nusara Anuntavanichaya, who turned up along with thousands of spectators. 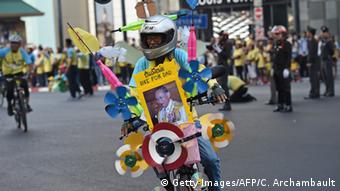 The monarch is a highly revered figure in the country burdened by years of political unrest. However, the king has spent much of the last six years in a Bangkok hospital, due to mounting health problems.

In August, the Royal Household Bureau said that the elderly ruler received treatment for "water on the brain", or hydrocephalus.

The Friday event is also seen as a chance for the crown prince Maha Vajiralongkorn to bolster his public image.

The leaders of a military junta,which has ruled Thailand since May 2014, praised the heir apparent, clad in yellow as a nod to the official color of the royal family.

"I am delighted that the Crown Prince graciously inaugurates the 'Bike for Dad' ... to honor the King on his 88th birthday," army chief turned premier Prayut Chan-O-Cha said.

The bicycle ride was broadcast live at all public television channels in Bangkok.

The Thailand royal family is protected by one of the harshest lese majeste laws in the world, threatening jail sentences of up to 15 years to anybody who "defames, insults or threatens the king, queen, heir apparent or regent."

The army regime has been facing increasing criticism over the application of the royal defamation law.

Many observers accuse the junta of interpreting the law too broadly and using it to persecute its political opponents.

Earlier in the week, a man was arrested for 'liking' a doctored photo of the king.

Bike tribute to queen in Thailand

Thousands of cyclists have been led through the streets of Bangkok by Thailand's crown prince in a tribute to his mother. The event is also an exercise in public relations at a time of concern over the king's health. (16.08.2015)