Thousands of people have gathered at the site of the Rana Plaza factory complex outside the Bangladeshi capital Dhaka. The demonstrations come one year after the building collapsed, killing more than 1,100 people. 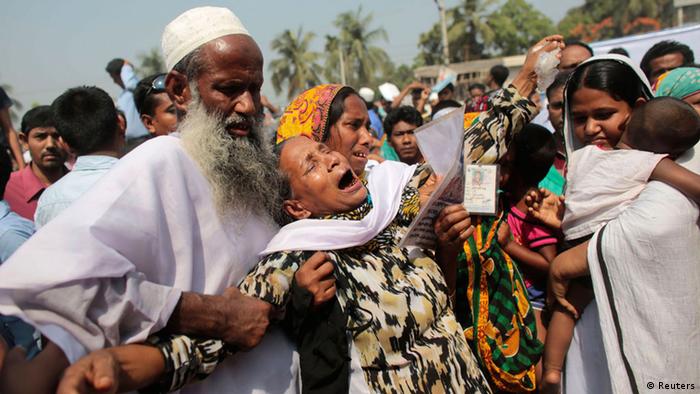 Survivors and families of the deceased gathered on Thursday to commemorate the victims of last year's Rana Plaza factory collapse, which killed more than 1,100 people, mostly garment workers, and injured 2,500 more.

Mourners laid floral wreaths at the site of the disaster, located 20 kilometers (12 miles) northwest of the capital Dhaka.

The multistory building collapsed on April 24, 2013, after a catastrophic structural failure.

Demonstrators at the site chanted slogans of "We want compensation" and "Death to Sohel Rana," referring to the owner of the shoddy building.

It was the first time since the area was sealed off following the disaster that relatives of the dead were allowed to visit the rubble. The site has not been cleared and some 140 workers are still unaccounted for.

Protesters also gathered in the capital holding banners outside the head office of the body representing local garment manufacturers.

Bangladesh Garment Sramik Sanghati, an organization working for the welfare of the workers, has called on the government, international buyers and factory owners to compensate survivors and victims' families. The group has also asked for April 24 to be declared Labor Safety Day in the country.

Global labor and rights groups have criticized Western retailers and say they are not doing enough to ensure the safety at factories where their clothes are made. The companies linked to the Rana Plaza disaster include the Spanish brand Mango, Italian brand Benetton and French retailer Auchan.

The Rana Plaza collapse is the worst ever disaster for Bangladesh's garment industry, a key part of the country's economy worth an estimated $20 billion (15.3 billion euros) annually. The industry was the third-largest in the world in 2011 after China and Italy.