Hundreds of thousands of Egyptians have taken to the streets across the country to call for the ouster of President Mohamed Morsi. Many fear the demonstrations could turn deadly. 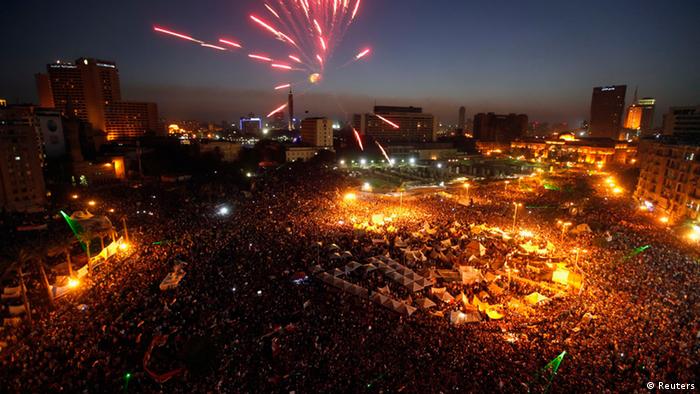 Waving Egyptian flags as patriotic songs blasted from speakers, protesters chanted "the people want the ouster of the regime" - a catchphrase used during the 2011 revolt that toppled former dictator Hosni Mubarak and brough Morsi to power.

Some protesters wore black bandanas with "Leave, Morsi" written on them, while others held up red cards.

"This is the second revolution and Tahrir is the symbol of the revolution," the protester Ibrahim Hammouda said.

The group Tamarod, which has led the protest movement against Morsi, announced Saturday it has collected 22 million signatures demanding that the president step down and new elections be held.

Tamarod, which means "rebellion" in Arabic, says Morsi has mismanaged the country.

In a show of solidarity with the Tamarod activists, at least eight members of Egypt's upper house of parliament, the Shura Council, have resigned from their positions.

"We resigned in support of 22 million Egyptians who withdrew their confidence from Morsi," Ihab al-Kharatt, an outgoing deputy, told the AFP news agency.

As tensions between Morsi's opponents and supporters rose on Saturday, a day ahead of the planned protests, US President Barack Obama called on both sides to engage in dialogue rather than violence.

"Every party has to denounce violence," said Obama from Pretoria, where he was meeting with South African officials and a group of youths. "We'd like to see the opposition and President Morsi engage in a more constructive conversation about how they move their country forward because nobody is benefiting from the current stalemate."

Obama also expressed his concern that violent unrest in Egypt could spill over to other nations in the region.

Millions of Egyptians want to overthrow their president

By collecting millions of signatures, opponents of Egyptian President Mohamed Morsi are pressuring his Muslim Brotherhood. Organizers have planned a large protest for June 30, which could turn violent. (29.06.2013)