Several Conservative MPs have praised PM Theresa May for persisting with a speech fraught with voice issues and an interruption from a prankster. However, British media reported that some were discussing her resignation. 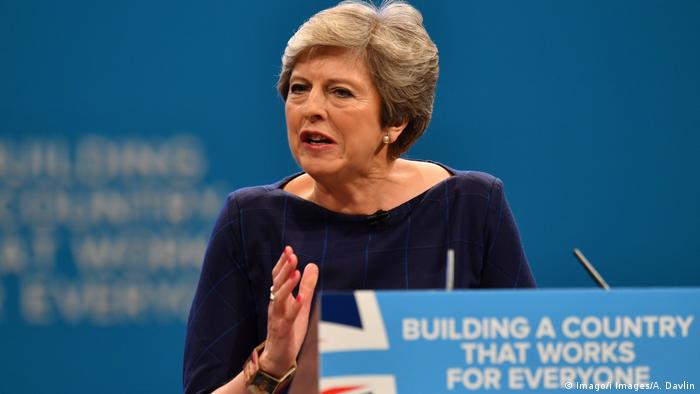 Fellow Conservative politicians backed British Prime Minister Theresa May on Thursday, one day after she delivered a speech marred by interruptions from a prankster and coughing fits.

"She showed guts and grace", Business Secretary Greg Clark told Sky News, adding that the conference audience showed a lot of warmth towards May.

A source in May's Downing Street office told Sky News that "resignation is not an issue" for May, meaning that she is not considering leaving her post.

Scottish Conservative leader Ruth Davidson, wrote on Twitter that she had "huge respect" for May's performance despite the difficulties.

Following May's speech on Wednesday, Foreign Secretary Boris Johnson tweeted some words of support for May, writing: "Great job by the PM today putting housing at the heart of renewing the British dream."

May also struggled to deliver the speech after succumbing to multiple coughing fits and a hoarse voice that was brought on by a "conference cold," her office said. Several letters of a slogan also fell off on the wall behind her.

Following the speech, May tweeted a picture of several throat lozenges and throat sprays around a copy of her speech.

Will May be forced to resign?

Despite support from several Conservative MPs, the BBC and several other British media outlets reported on Thursday that some members of the party were discussing whether to ask May to resign.

The Daily Telegraph newspaper reported that some 30 Conservative MPs are prepared to ask her to step down. In order to force a vote on the prime minister's leadership role, the votes of 48 members of parliament are necessary.

When asked whether some within the party want to oust May, Business Secretary Clark urged Conservatives to keep a cool head.

"The view of the party, both parliamentary colleagues and activists, is that they regard, correctly, the responsibility of the Conservative Party to be effective and cool-headed in government," Clark told BBC Radio 4.

Delivered on the final day of the Conservative Party conference in Manchester, May's speech was intended to reassert her authority and mark a fresh start for her party following an underwhelming election result in June's snap election.

Instead, May was first interrupted by prankster Simon Brodkin, also known as Lee Nelson, who handed her a P45 – a form given to those who have been laid off in Britain. As he was dragged away by security, he said Boris Johnson "told me to do it."

Brodkin's ability to get so close to the prime minister and his legitimate conference accreditation have led many to question the security at the event.

US police uncover 'possible plot' to breach Capitol 36m ago