John Rabe, a German businessman saved thousands of Chinese from Japanese soldiers during WWII. DW-WORLD.DE spoke with Erwin Wickert, the editor of his diaries. 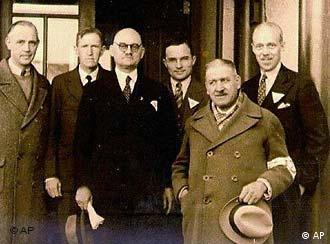 Though a Nazi party member, Rabe, third from left, rescued Chinese from death

German author and diplomat Erwin Wickert, the 91-year-old editor of the diaries "John Rabe: The Good German of Nanking," talked to DW-WORLD.DE about Rabe, whom he first met in 1936. Wickert is a novelist, author of numerous books on East Asia and a former ambassador to China.

DW-WORLD.DE: How did you meet John Rabe?

Erwin Wickert: I was a hobo, a bum looking for adventure, had been a German exchange student at Dickinson College in Pennsylvania, and wanted to take the Pacific route to East Asia. When I arrived in China, I was 21 and broke -- it was difficult arranging money transfers from Germany in 1936. I was hoping to find other Germans I could stay with, and was referred to Rabe and his wife Dora, who generously took me into their home. 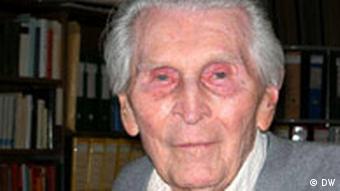 Rabe had joined the Nazi party in 1934, yet he opened his home to strangers -- to you and to hundreds of Chinese fleeing Japanese soldiers. What kind of a man was Rabe?

In Hitler's time, there were three types of Germans: the Nazis, the intelligentsia and the decent Germans. It was possible to belong to two of the categories, but not all three. Rabe was clearly honorable and he was a Nazi in name. He had no idea about Hitler and had only heard good things. Remember, Rabe had spent decades in China. He had only been in Germany briefly in 1928 during a time when the Nazis were an unknown entity.

Still, he read German and English newspapers in China, and there were so many Jewish emigrés who suddenly started arriving in Shanghai and elsewhere. He should have given more weight to the testimonies of the Jews, but Rabe was absolutely not anti-Semitic. Not a single anti-Semitic reference could be found in his diaries.

In Nanking, the Americans and Brits thought he must have been high up, because he boasted about being a Nazi member and firing off a telegram to Hitler. He wasn't. To many Germans abroad, being a Nazi didn't mean anything. They needed to join the party to further their careers or to achieve certain goals. Rabe had joined in 1934, because he wanted to open up a German school for the locals.

He had certainly used his Nazi credentials to shelter the Chinese. The Japanese soldiers, many of them very young, went on a rampage, killing civilians in every way imaginable. Why did they suddenly stop at Rabe's door in the international security zone?

He bluffed a lot, and even worried about how long he could continue bluffing. He showed them his Nazi badge. They must have thought that Hitler was around the corner. One soldier was in the middle of raping a woman and Rabe simply shouted, pointed to his swastika, and sent the soldier back over the fence. He had no weapons, but the Japanese knew he was German. 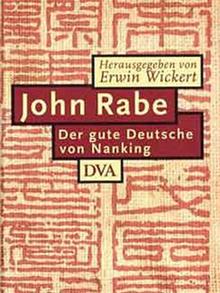 You worked for the German Foreign Service in Shanghai during the war, and then you were posted as a radio attaché to Tokyo, where you stayed until shortly after the Japanese surrender. Having witnessed Japanese aggression in China, how did that make you feel about Japan?

The Japanese are difficult to understand. Many could not admit that their own countrymen committed such atrocities, but they wanted to know about it. The Rabe diaries were published in Japan, and the book was enormously successful. Probably because it was a day-to-day account of what happened, and it did not condemn the Japanese as a people.

There was one chapter of the Rabe diaries that appeared in German, but was dropped by the American publisher and never translated into English. I describe the bestialities that were committed in the name of Imperial Japan as part of the human condition. Perhaps Rabe summed it up best, "There is good and evil in every nation. The brave and the criminal. In war unfortunately, criminality always rises to the surface."

John Rabe was an ordinary German businessman in China when the Japanese invaded Nanking in 1937. Nearly 70 years later, a memorial was dedicated to the "Good German" who saved thousands of Chinese lives. (08.11.2006)

Oskar Schindler was a German businessman and Nazi who went to Krakow to make money after Hitler invaded Poland. Instead, he spent until the end of the war saving lives -- including Stella Müller-Madej's. (27.01.2006)