Myanmar's president has made his first trip to Brussels. European Union leaders pledged more economic aid to the country, while the Southeast Asian leader called for a complete lifting of sanctions. 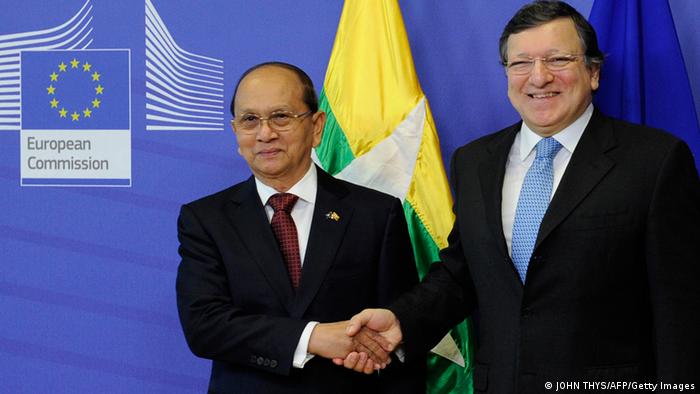 "You have in the European Union a committed and long-term partner for the historic journey that Myanmar and its people have started," Van Rompuy was quoted as telling Thein Sein during their talks.

The Myanmar leader has received praise for helping to usher in democratic reforms since taking power in March 2011, including releasing thousands of political prisoners and staging elections.

"The EU and Myanmar are turning a page in their relationship," Barroso said. "More dialogue, more and better aid, more trade and investment."

Thein Sein asked the EU to approve a proposal to restore Myanmar's preferential trade status, which it lost in 1979 because of international agreements violations and forced labor under the country's military junta.

Van Rompuy and Barroso said the EU would look at the possibility of a "bilateral investment agreement" with Myanmar, and Ashton would travel to the country later this year to look at further economic support.

The EU has more than doubled its development aid to Myanmar to about 150 million euros ($195 million) for 2012-13. Last April, EU ministers agreed to a one-year suspension of most of the decades-old sanctions against the country, keeping only an arms embargo in place.

Thein Sein called on European leaders to go one step further and lift all sanctions against his country, saying Myanmar, which is also known as Burma, was "one of the poorest countries in the world."

"We face many challenges, but you have my promise: We will continue along this path and we will succeed," Thein Sein said, adding that Myanmar had "no desire of becoming an aid-dependent country."

"My government will do everything in its power to see Myanmar become a democratic and prosperous and peaceful nation," he concluded.

However, the EU said there was still progress to be made in the country, noting that it was monitoring the state of minority rights in the country - in particular the ongoing conflict in the northern state of Kachin and the communal Buddhist-Muslim unrest in the western state of Rakhine.

"Important challenges remain - in particular, on the need for a comprehensive peace settlement in ethnic areas," Van Rompuy said.

The unrest in Rakhine has displaced more than 100,000 members of the country's Rohingya Muslim minority. Dozens of others have been killed in the violence that began in June, 2012.

The United Nations has described the Rohingya Muslims, who number around 800,000, as one of the most persecuted minorities on the planet.