The Year of the Locust

A senior politician sparked the current debate on capitalism in Germany by comparing foreign investors to a plague of locusts. But some say the use of such populist rhetoric masks a deep-seated aversion to capitalism. 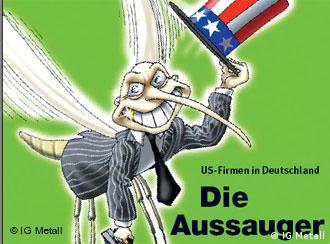 The insect metaphor is finding plenty of resonance in German media

The hum started in April, when SPD party secretary Franz Müntefering unleashed a stream of rhetoric likening foreign investors to a swarm of insects.

"Some financial investors spare no thought for the people whose jobs they destroy," he told the mass-circulation tabloid Bild. "They remain anonymous, have no face, fall like a plague of locusts over our companies, devour everything, then fly on to the next one." 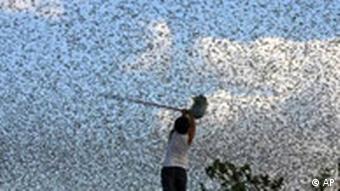 Foreign investors have been likened to a swarm of locusts

Since then, the droning buzz has grown ever louder: locusts, everywhere. A giant locust and the Union Jack flag superimposed on the Frankfurt stock exchange in Bild. An insect with a Yankee Doodle hat and the headline "US Companies in Germany: Bloodsuckers" on a German trade union magazine.

Müntefering's "locusts" have got staying power.

Michael Wolffsohn, an expert on German-Jewish history at the German Armed Forces University in Munich balked at the metaphor and accused Müntefering of drawing on anti-Semitic propaganda used by the Nazis.

"Sixty years on, human beings are again compared with animals -- a 'plague' that must be destroyed," Wolffsohn wrote in an article published in the Rheinische Post.

SPD officials vehemently denied Wolffsohn's accusations, though Müntefering himself has kept mum. Still, many analysts agree that the locust remark has reduced the debate on capitalism in Germany to a crude level.

"I would not go as far as Wolffsohn to say that (Müntefering) deliberately used anti-Semitic language, but I would say that there is a problematic tradition in such terms that he should have been aware of," said historian Paul Nolte of the International University Bremen. "I was surprised at his lack of sensitivity."

For Nolte, lurking behind the populist slogans is the beginning of a larger, long-overdue discussion about what he calls the "c-word" -- a sign of Germans' troubled relationship with capitalism.

"There is a deficit in understanding among the German public of what kind of economic order we live in," Nolte said. "It's worth some serious enquiry about why Germans react to the c-word the way they do." 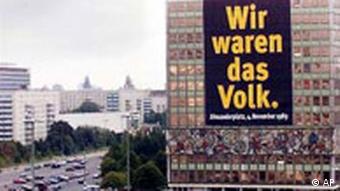 A huge poster hangs on a house Thursday, October 7, 1999, on the occasion of the 50th anniversary of the former GDR in the Karl-Marx-Allee avenue in eastern part of Berlin where a last gigantic military parade by East German communist leadership occurred ten years ago. The poster reads: "We were the people."

Nolte pointed to the fact that, in the immediate postwar years, there was a strong antipathy towards capitalism from both the left and right of the political spectrum, the roots of which date back to the 19th century. It was seen as something foreign, not part of German culture.

"In the 1950s and 60s it looked as though we had overcome these reservations," Nolte said. "With the postwar success narratives of the 1970s and 80s, there was the kind of rhetoric that said Germany had finally arrived in the West, had accepted democracy, pluralism, and capitalism -- so long as it was classed as a social market economy."

"But it might be that this acceptance of capitalism had not progressed as far in the postwar period as we thought. Until recently, it was part of an illusion we had, sustained by better economic times."

Germany's role in recent years as the sick man of Europe, coupled with popular skepticism of the government's economic reform agenda has finally caused Germans' unease with the capitalist system to bubble to the surface. 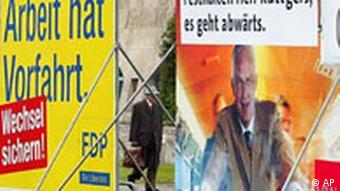 Campaign posters for the May 22, 2005 state election in North Rhine-Westphalia

Speculation is rife that the capitalism debate has been orchestrated by the SPD in order to garner much-needed votes from its core working class members in this weekend's elections in the key state of North Rhine-Westphalia.

Chancellor Gerhard Schröder's Social Democrats have governed the populous industrial state for 39 years, but according to the polls, a disastrous electoral defeat in NRW is likely. Yet so widespread is the self-doubt created by Germany's economic downturn that not even the opposition parties have been able to counter the SPD's capitalist-bashing rhetoric, Nolte said.

"The opposition's position is moving too much in the defensive or saying nothing at all. Maybe the situation will change after the elections on Sunday, but even in the rank and file of the conservative parties, there is an uncertainty, a sense that maybe Müntefering has a point, and that we are in danger," said Nolte.

Depending on the outcome of the elections in NRW, foreign analysts are already predicting that Schröder will find it difficult to resist carrying on the populist debate on aggressive capitalism, turning it into a platform issue in the run-up to general elections in 2006.

"Herr Schröder has indulged in anti-American rhetoric before to fight elections, even at the cost of relations with the US, which have never recovered," read a recent commentary in the British newspaper The Times. "It is hard to see why, short of a recovery in the polls, he will resist the temptation of making 'anti-capitalism' his motto for next year's fight."

What could help him resist the temptation, according to Nolte, is the fact that Schröder is a pragmatist who is pro-business at heart. The debate so far has had limited capacity to damage Germany's reputation abroad, he said -- but warned that this could change were the government to take action to clamp down on the activities of foreign investors.

"As long as it stays in the realm it's in now, the debate is probably not as damaging as some would have us believe," Nolte said. "But if it were translated into new regulations or restrictions on foreign capital, then of course it really becomes dangerous."

Financial investors have recently shown their might by shaking up Deutsche Börse. Their focus on added value puts pressure on companies. But it also raises a company's share value and profitability. (May 15, 2005)

Some bankers say an ongoing discussion in Germany over capitalism is harming the country's image. But recent events at Deutsche Börse have lent the anti-capitalists support. (May 11, 2005)

German Chancellor Gerhard Schröder's Social Democrats appear to be heading for a potentially devastating defeat in a regional election in the industrial state of North Rhine-Westphalia on Sunday. (May 18, 2005)