There was no political program at the beginning of Myanmar's democracy movement. There was only hatred towards the ruling regime. Only later would it turn into an organized opposition. 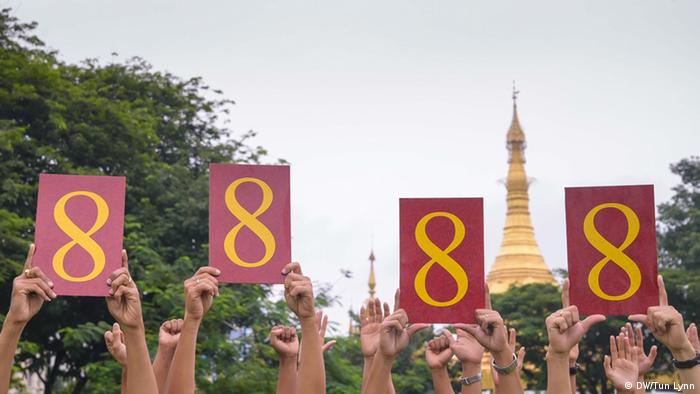 On March 12, 1988, a fight broke out between a group of students and local youths at a tea house near the Rangoon Institute of Technology. The latter were not charged or punished because one of them was the son of local politician. Enraged over the obvious display of partisanship, the students protested. In an encounter with the notorious riot police, called Lon Htein, the 23-year-old student Maung Phone Maw was shot and killed. He was the first victim to be killed. Many more followed in the ensuing riots.

The tea house incident was the straw that broke the camel's back. Myanmar's economy had gradually decayed since the socialist party, with close ties to the military, came to power in 1962. In the decades leading up to 1988, a corrupt system of nepotism and patronage had established itself. It was a system described by the saying "ma lok, ma shot, ma pyot," which means "No work, no responsibility, no sacking."

After the end of the colonial rule, Myanmar had the potential to rise to become one of the richest Southeast Asian nations with its vast natural resources. But the economic situation of the people hardly improved. 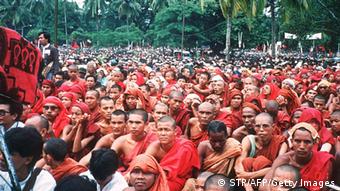 Monks also took part in the protests of 1988

Until the year 1985, prices remained relatively stable. At the end of the 1980s, however, they began to drastically rise, but wages remained the same. Even people working for the military, in politics or members of the economic elite were reliant on the black market. In order to stop inflation and put an end to unregulated Chinese businesses active in the black market, the government decided overnight to devalue the country's 25, 35 and 75 kyat currency notes.

Thiha Saw, who at the time worked as a journalist for the Burmese news agency NAB, says: "One of our editors-in-chief reached retirement age. For his 30 years of service to the state, he received a lump sum of 50,000 kyat. He invited us all out to eat. It was a real banquet. As we were there eating, they announced on the radio that the 25, 35 and 75 kyat bank notes would no longer be legal tender, effective immediately. From one second to the next, our boss' settlement was worthless. He had received the entire thing in 25-kyat notes. After that, he received no compensation. Something like that, of course, would make people angry."

A blow to national pride

The currency devaluationwas followed three months later by the United Nations' decision to add Myanmar to the list of Least Developed Countries (LDC). The UN General Assembly had compiled the list in 1971 to call for special support from the international community. Suddenly, Myanmar was at the same level as the world's poorest nations.

"People felt the currency devaluation in their wallets. But being put on that list hurt their national pride," said Thiha Saw. He and many other experts see these two factors as the main reasons for the birth of the protest movement.

As a result of the tea house incident, there were a number of mass demonstrations. People marched through the streets waving red flags with an imprinted fighting rooster. This later became the logo of the opposition National League for Democracy (NLD). Initially, the demonstrators shouted anti-government slogans "doh ayei!", which means "our cause!" Later they started shouting "de-mo-cra-cy!"

The word democracy in Burmese is a foreign word that did not have much meaning for the movement's students at the time. "The people had no idea what democracy was," said Thiha Saw. "I didn't know what it meant either," admitted Nyan Win, who today is a lawyer for the Supreme Court and a leading member of the NLD.

Khin Maung Gyi, the then trade minister and member of the governing party, the Burma Socialist Programme Party (BSPP), believes to this day that there were oppositional and communist elements behind the protest movement. "Trouble makers mounted the stage to take advantage of the students' rage."

Thiha Saw, however, criticizes that the then governing party, which later reconstituted itself under the name National Unity Party (NUP), has not acknowledged to this day that there was no communist nor foreign-controlled conspiracy. Instead, he says, it was about people voicing their suffering and feelings.

The protests were not restricted to the capital city of Yangon. There were bloods clashes between demonstrators and security forces throughout the country.

"When the protests started, we were on the side of the masses. It was a multi-ethnic demonstration. The ethnic minorities supported the majority of Burmese because they felt they all shared the same unfortunate fate under the government."

Attempts by the autocratic BSPP in 1988 to regain control over the country backfired. Neither the special party convention nor the resignation of General Ne Win, who had ruled the country since 1962, were able to stop the protests peacefully. On the contrary, the general's resignation made the situation worse. Not even the government's promise to introduce a multiple-party system and to set up an electoral commission helped.

Khin Maung Gyi, then a top member of the BSPP, is convinced that the government simply did not have enough time. "It was all a question of time. The students were very impatient and wanted to see quick results." Had the students been more patient, the BSPP would have been able to resolve the conflict, Khin Maung Gyi says. 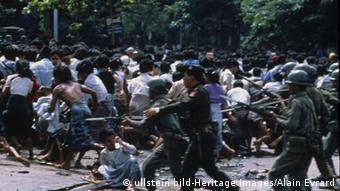 In September 1988, leaders of the opposition rejected the election commission because it had been created by the government, which the people did not trust. Looking back today, it seems to have been more a question of trust rather than time.

The inability of the government and the opposition to find a compromise led to anarchy and chaos. Security forces imposed draconian measures and randomly attacked protesters. Hundreds of people were killed and thousands were arrested. There was abuse and torture.

According to Thiha Saw, some protesters were also violent. "Sometimes people marched into police stations, stole the weapons there and used them to shoot soldiers." A few people thought to be members of the intelligence agency were beheaded by an angry mob right in public. "It was not a political movement. It was absolute savagery," said Khin Maung Gyi.

The political movements did not materialize until August 1988. The students organized themselves in unions, in which they discussed and debated their first political goals. They planned a general strike for August 8, 1988. 8888 became symbolic of the national uprising.

The daughter of the national hero

Events took on a new dimension when Aung San Suu Kyi, daughter of the national hero Aung San, who led Myanmar to independence from the British, entered into politics. In her first public speech, she spoke in front of around half a million people and swore to lead "Burma's second fight for independence." That speech laid the foundation for her later fame which today makes her the international icon of Burmese resistance. 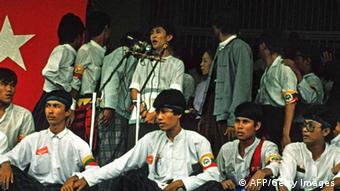 On September 18, 1988, the military put an end to the protests. At four o'clock in the afternoon, the state broadcaster BBS announced: "In order to stop the worsening conditions on all sides simultaneously throughout the country, and in the interest of the people, the military has taken control of power as of today." The newly-created State Law and Order Restoration Council (SLORC) was instated.

In a coordinated mission throughout the country, military groups in all larger cities clamped down on demonstrations and after a very short time, they completely died down.

Suu Kyi, Tin Oo and Aung Gyi founded in September the National League for Democracy (NLD), which attracted a large part of the opposition. However, the party's ability to engage in politics was severely curtailed by the military junta.