Here you can learn how and what DW author Stephanie Drescher and her "50 Kitchens" team love to eat. 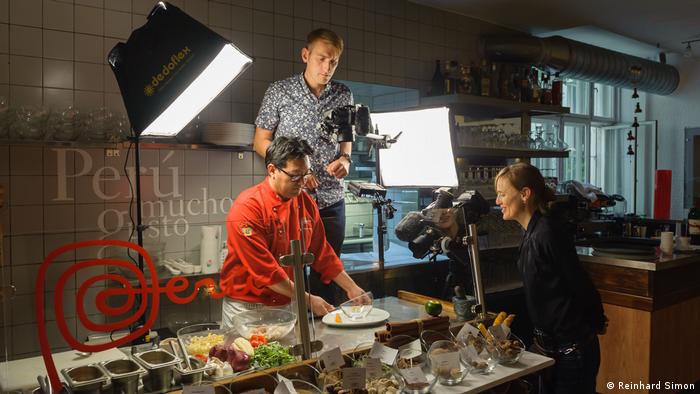 Stephanie Drescher, author and director of "50 Kitchens, One City"

"I love eating Asian food because it's light, flavorful and full of surprises. Also, since I'm a vegetarian, it offers me all sorts of dishes to choose from. I love cilantro - a spice found in a lot of Asian dishes. And the colors! Asian cuisine is colorful and exotic. But when it comes to my favorite vegetable, it's very German - potatoes. I love them in any way they're made."

Uwe Schwarze, cameraman and video editor of "50 Kitchens, One City"

"While we were filming this series, I ate so many different, delicious dishes that it's hard to choose one as my favorite. But I do have to say that Salzburg Bierfleisch is one that has imprinted itself in my mind. For this dish, a sauce of vegetables, herbs and spices is created that has such an intense flavor that I had to try it out for myself. I wanted to know if I could create it just as well, so I cooked it for Christmas. And I was quite happy with the results."

"After eating my way through 50 different cuisines, I have to say that it's the variety that I find the best. It's great living in Berlin because I can go on a culinary journey each and every day. So I don't want to, and can't choose, only one! (But if I did have to choose one dish as my favorite, it would be my mother's duck breast with potato au gratin.)"

Dr. Daniela Schulz, editor and author of "50 Kitchens, One City"

"I grew up eating Chilean Empanadas, Palantine Saumagen (roasted pork sausage), and Hungarian goulash. When I travel, I like to try out new things since every region has its own cuisine. I really like that of the Iberian Peninsula - whether it's  Catalan Calçots, Galician Filloas, or Basque Pintxos with a glass of Txakoli - they're all top-notch!"

"At the moment, my favorite food is Indonesian because the cuisine is as diverse as the country is and it's very tasty. The preference also has to do with my wife, who's Indonesian. I recently bought two cookbooks with Indonesian recipes that often inspire us to experiment with food. But my wife prefers consulting cooking videos on the web for recipe ideas."

"I grew up in the US, a melting pot in terms of the menu offerings; dishes there seem to be inspired by other cultures but are really Americanized. Black bean burritos, for example, are a favorite both to cook and to eat and I didn't know until I was an adult that they're a real California invention, not Mexican. Which is why I'm stoked to try the authentic Azteca Soup, which uses the chilis I have grown to love. For a less spicy, fancier meal, I treat myself to a vegetarian version of Khoresht Fesenjan, an Iranian stew made of pomegranate molasses and walnuts. It takes hours to cook but is always worth it."

Louisa Schaefer, editor and translator for the English pages

"My taste in food is seasonal. I tend to prefer Italian cuisine in the winter. In the summer, I like something lighter, and love Thai food the most: it's flavorful, has a bit of a kick, and feels super healthy for your body as soon as you take a bite."

"There is hardly cuisine of any country or hardly a regional specialty that I don't love! At the moment, I really like the herbs and spices found in Indian, North African and Oriental dishes, especially cilantro, cumin, cinnamon, cloves, and the fragrance of freshly roasted, ground mixtures of Garam Masala, Dukkah or Ras el Hanout. And, something totally different: I would turn down any starred dish for a really good soup."

"I love Italian cuisine - anything from bruschetta, to risotto, to pasta and panna cotta. But in the course of the "50 Kitchens, One City" project,  I was pleasantly surprised by one cuisine in particular: that of Georgia. I can highly recommend Amolesili Lobio (red kidney beans with Georgian spices served in a clay pot) prepared by Schwiliko."

Dr. Nadja Scholz, idea and concept, "50 Kitchens, One City" and Head of Corporate Strategy at DW

"Italian, hands down. I lived in Italy for two years. That was the land of milk and honey for me in terms of food. There's hardly any Italian food I don’t like - except for innards."

"For as long as I can remember, I've loved eating Chinese food. As a kid, my favorite dish was Peking duck wrapped in thin pancakes. Nowadays, my favorite dish is Shanghai Tangbao (soup-filled buns). But I don't like everything Chinese cuisine has to offer. I tried sea cucumbers once in Hong Kong, but that was really too much for my Western European taste buds."

"It's clearly Italian cuisine for me, and that has largely to do with my childhood and countless vacations in Italy. We eat pasta in various forms and with different sauces several times a week at home or at a restaurant. I like pizza, whether it's Neapolitan or stone-baked, or even a slice from Ali Baba, the Arab-Italian place, for 1,50 euros. But I also like meat dishes like Osso Buco, Tuscan wild boar goulash, or stewed rabbit. Italian wines, especially the Tuscan ones, are very tasty, as is the famous Gelati and Tiramisu for dessert. And strangely enough, my children have apparently inherited this preference for Italian food."

Rolf Rische, idea and concept, "50 Kitchens, One City," and DW Head of culture and German TV

“I would love to eat a meal from a different country every single day. And Berlin is the best place to do that in Germany. There's an intersection in the Kreuzberg district, for instance, where there are six restaurants with cuisines from six different countries. And that's exactly where I was in the summer of 2015 when I came up with the idea of '50 Kitchens, One City.'" 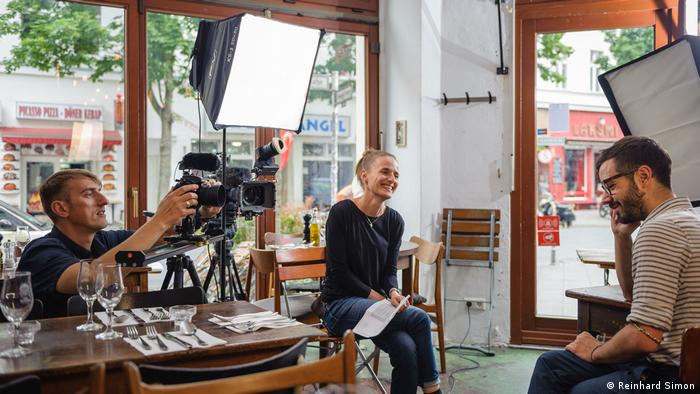 "50 Kitchens, One City" is a television series of Deutsche Welle (DW). The DW program "Euromaxx" shows this series on TV worldwide and online. The reports for Euromaxx are produced byBasiliscus Productions .