The Rise and Fall of Silvio Berlusconi | Europe| News and current affairs from around the continent | DW | 06.04.2006

The Rise and Fall of Silvio Berlusconi

Italy's self-aggrandizing prime minister and law-twisting media mogul Silvio Berlusconi has every reason to be worried about the upcoming Italian elections: If he looses, his dolce vita may be over sooner than he hoped. 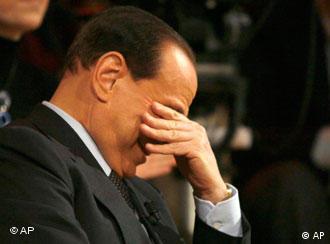 Berlusconi knows that the fall from power may hit him hard

Nobody in Europe seems to be taking Silvio Berlusconi seriously enough, probably because the Italian prime minister usually makes the international headlines for rather curious reasons. It would be unthinkable in Germany, for example, to hear former Defense Minister Peter Struck extolling the virtues of his new hair transplant, Vice Chancellor Franz Müntefering making a public vow of chastity to prepare for the next elections, or Chancellor Angela Merkel declaring herself to be the female messiah of German politics. In Italy, however, thanks to Silvio Berlusconi, such preposterous events have become a matter of daily routine.

And although one cannot help being amused by it, the Berlusconi show is actually no laughing matter. With his bizarre talent for self-presentation, Berlusconi has so far been extremely successful. The always tanned media mogul with a shark's grin, who describes himself as an "embodiment of the Italian dream," has been in office longer than any Italian prime minister before him -- except for fascist wartime dictator Benito Mussolini. His estimated assets of $11 billion (9.1 billion euros) also make him Italy's richest man. 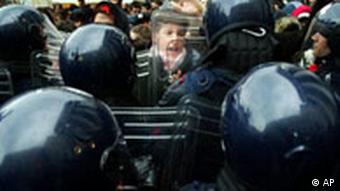 Berlusconi's election campaign has been accompanied by demonstrations

Since 2001, Berlusconi has been accumulating more and more power. State prosecutors who'd like to talk to him about his allegedly illegal business practices have been helpless against his political immunity. In the last 10 years, Berlusconi has had charges pressed against him in more than a dozen cases, but he has consistently managed to escape justice through delays, appeals or laws that protect him. Italians call it lex Berlusconi.

The power of the Italian prime minister is based on a leadership style which he himself describes as economic. He calls himself the "CEO of a company called Italy." While in office, Berlusconi has kept widening the competences of the prime minister. He also gradually took over almost the entire Italian television market. He owns the influential Mediaset TV company, but his arms stretch all the way to the top floors of the state broadcasting company RAI, whose board and editorial staff are filled with his minions.

Berlusconi controls around 90 percent of public media in Italy today, which is why Italians -- in between afternoon talk shows, soccer matches and soap operas -- get to see a lot of him on their TV sets. He is often portrayed as a personal friend of US President George W. Bush and Russian President Vladimir Putin, the Italian "messiah," the man whose glance makes women melt with pleasure, as well as a soccer patron. (He does own top Italian club AC Milan.)

Ahead of the national elections, scheduled for April 9-10, he has been celebrating himself for weeks in newspapers, on TV and the radio as a statesman, womanizer, entrepreneur and clown par excellence. The prime minister is indeed a genius at selling himself. 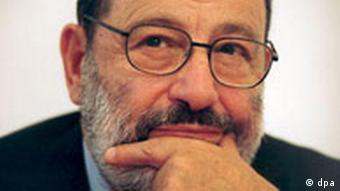 Umberto Eco is one of Berlusconi's sharpest critics

His power over the media and his presence in them has set off a "silent cultural revolution," according to Berlusconi expert Alexander Stille. Umberto Eco, world-famous author and one of Berlusconi's sharpest critics, has spoken of a TV regime, mass-media populism and a system that teaches Italians to believe what they see on television.

Italy placed 77th -- together with Mongolia -- in the list of global press freedom rankings for the year 2005. According to US-based watchdog organization Freedom House, which compiled the rankings, the press in Italy is only "partially free."

In pre-election polls, Berlusconi's challenger and former European Commission President Romano Prodi has been slightly ahead of the incumbent. Prodi won a recent TV duel precisely because Berlusconi could not charm the audience within the strict rules of televised debates. His opponents can now smell the scent of fresh air.

Observers of Italian politics have described the otherwise self-confident prime minister as becoming arrantly insecure. In the beginning of March, Berlusconi even lost his composure in public. He stormed out of a live talk show because he didn't like the questions. 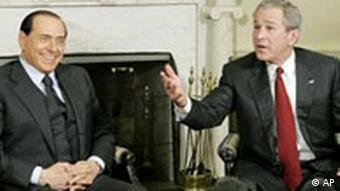 Berlusconi and his conservative party Forza Italia are betting their entire election campaign on the personality of the prime minister mostly because his government has very little to show as its accomplishments. "What have you done in these five years other than create laws that protect your own interests?" Prodi asked during the TV duel. During Berlusconi's term, the conjuncture of Europe's fourth largest economy has deteriorated from a 1.8 percent growth rate in 2001 to 0 percent today.

The controversial judiciary reform of 2005, which the German newspaper Süddeutsche Zeitung described as the "victory of the hoodlums," doesn't exactly carry much weight. Legal proceedings in Italy drag on forever. In terms of legal efficiency, Italy is today on the same level as Guatemala.

The times of dolce vita are probably over, even though Berlusconi does not want to admit it to himself. Not long ago, he said that during his term in office he had brought Italy to the highest international level and that he was "greater than Napoleon." Some voters would beg to differ.

Fishing on the right 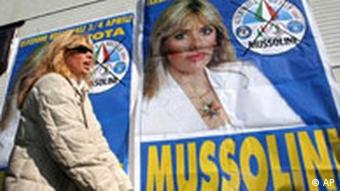 "Il duce" was her grandfather, and now Berlusconi likes her: Alessandra Mussolini

Since the voters seem to be distancing themselves from their once beloved prime minister, another unpleasant chapter is being added to the history of Silvio Berlusconi: The prime ministers is fishing for votes on the far right. Forza Italia is already in alliance with the post-fascist National Alliance and the Northern League, but quite a few eyebrows were raised when the Berlusconi recently brought the neo-fascist Alternative Alliance on board. The president of the Alternative Alliance is Alessandra Mussolini, grand-daughter of the Italian dictator and an unapologetic proponent of right-wing extremism.

According to public opinion experts, rubbing shoulders with fascists may bring one or two percent points to Berlusconi. It's also possible that the association with the radical right is an act of despair, because Berlusconi knows for a fact that nobody will be there to protect him if he loses the elections. If he does lose, he'll face a series of tete-a-tetes with the antitrust authorities as well as state prosecutors. They've been looking forward to a chat with him for quite a long time.

Out With The Old, in With The New as Angie Meets Silvio

Gerhard Schröder's time in office is something Silvio Berlusconi would like to forget. When Angela Merkel visited Rome on Monday, the signs hinted at a new start in relations between Germany and Italy. (Dec. 12, 2005)

Italy is seeing a revival of vicious electioneering ahead of a general election held on April 9 and 10. Prime Minister Silvio Berlusconi is trailing and is now turning to the far right in a bid to shore up support. (April 4, 2006)

Italy’s senate has passed a controversial bill that could lead to a major overhaul of the country’s constitution. Critics already say the planned changes would give disproportionate powers to the prime minister. (Nov. 17, 2005)