The persistence of corruption in Brazilian politics

A number of Brazilian politicians are corrupt, and yet that doesn't seem to diminish their chances come election time. Some known to have dubious records remain veteran politicians. DW 's Philipp Barth in Rio asks why. For years, embezzlement and corruption have plagued Brazilian elections, and yet the electorate continues to vote for the same convicted politicians time and time again. More than 142 million people were eligible to vote in Sunday's presidential and legislative polls - but why do the crooks remain so popular?

In Rio de Janeiro, politician Anthony Garotinho sits quite high up in the polls. In 2010, the ex-governor was convicted for corruption and establishing a criminal organization. He was said to head a "militia" - a gang of former police officers who extort protection money and organize parallel justice in many parts of Rio.

But Garotinho didn't stay behind bars for long. His prison sentence was reduced to a community service order and now he's been back in the presidential race. Only one single politician in the Brazilian state of Rio de Janeiro - an outside candidate, so to speak - is said to have never fallen foul of the law.

Rio de Janeiro is not an inglorious exception in Brazil. In Sao Paulo, former governor Paulo Maluf has just been appointed as a member of the Brazilian parliament. To his fellow countrymen, the 83-year-old politician is known by his catchphrase "Corrupto, mas faz," which translates as "Corrupt, but hands-on."

The verb "Malufar" actually derives from the 83-year-old's name and has become a regular word in Brazil's Portuguese vocabulary, simply meaning "to steal from the state." Critics claim the ex-governor has embezzled hundreds of millions of euros over the years. Even today Interpol has an international warrant out for his arrest. 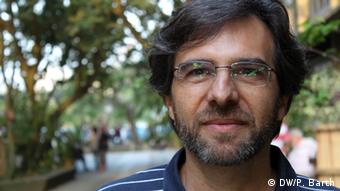 Maluf is just one in a long line of politicians who have made appearances in well-known court cases. But for onlookers the question remains: Why do Brazilians continue to vote for these politicians?

For Brazilian corruption researcher Marcos Bezzerra from Nitéroi University in the state of Rio de Janeiro, the reason lies in the relationship between Brazilians and their politicians. "Local politicians and members of parliament see their task as being to smuggle as much money as possible from the capital to their voters," said Bezzerra. In the administrative jungle of the huge South American country, which is made up of 26 states, this is somewhat of a challenge. The electorate therefore pays back their debt through voting.

This indirect vote buying is particularly rife in areas where the population relies on all kinds of donations, for example in the slums of the big cities. Corruption researcher Bezzerra argues that it comes down to a lack of political information there.

Business with the poor 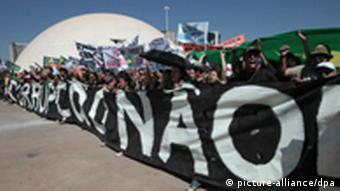 "No to corruption!": Protest march in Brasilia

During this year's election campaign, the issue of corruption has come up time and time again. The Mensalao scandal, involving monthly bribe payments to members of parliament of the ruling Workers' Party PT, makes an appearance at every election. Current allegations that semi-governmental oil company Petrobras made payments to politicians have also provided President Dilma Rousseff's opposition with ideal fodder for the media.

The fight against corruption has consequently become a topic of national discussion. In June 2013, Brazilians made their displeasure known and took to the streets. Among other things, the mass protests led to the tightening of legislative power in the Brazilian parliament and corruption being graded as a capital offense.

"Govenor of the people"

Since 2010, the anti-corruption law, "Ficha Limpa" ("Clean Record"), is supposed to have made it impossible for convicted politicians to apply for candidacy - thus removing the prosecution immunity which a seat in parliament or a ministerial post provides. 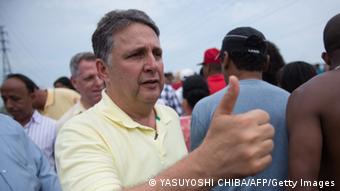 Convicted Anthony Garotinho relies on his supporters during the election campaign

Finally, despite its early years as a toothless tiger, the law is starting to show its first signs of success, as several candidates have been forced to stand down. After decades, even the political career of Paulo Maluf could be coming to an end. The case against his candidacy is in the court of last resort, after his lawyers filed an appeal.

In Rio de Janeiro, however, all attempts to stop the candidacy of former governor Anthony Garotinho have failed. And so his supporters continue to campaign for the convicted politician in picturesque Guanabará Bay.

For Geílson Oliveira, a 50-year-old real estate agent, all points of judgment are a "lie." You only have to ask those who know Garotinho to learn that he's "a good man", a "governor of the people," he says.

Geílson's colleague, Isaac, carrying a banner bearing an over-sized portrait of Garotinho, immediately dismisses the judgments. "All Brazilian politicians are corrupt and criminal anyway," he says with a laugh. "He's not in prison. So everything's good, right?"

Rousseff faces off with Neves in Brazil presidential vote

Official results in Brazil show incumbent Dilma Rousseff will face a run-off vote against challenger Aecio Neves in the country's presidential election. Rousseff was the favorite heading into the vote. (05.10.2014)

Voters in Brazil are going to the polls, with incumbent President Dilma Rousseff likely to face a runoff. But the battle for second place may be very close fought. (05.10.2014)