The Nazi legacy of the German interior ministry | Germany | News and in-depth reporting from Berlin and beyond | DW | 04.11.2015

The Nazi legacy of the German interior ministry

The days of Nazism were over - however, after the war, former NSDAP members simply resumed their careers in a number of public authorities and ministries. Even in the interior ministry, as a new study shows. 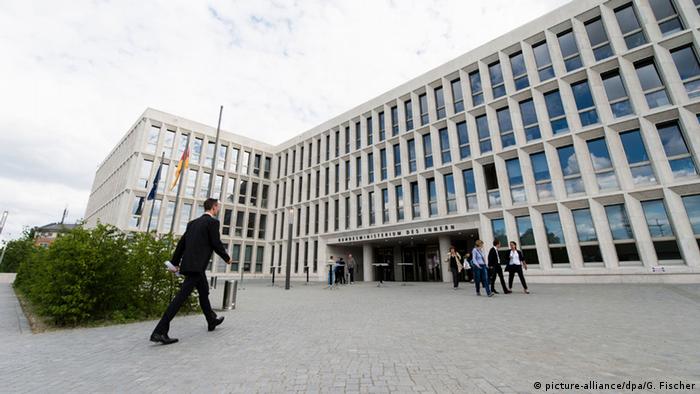 The head of a division once largely responsible for Nazi education policy, others who participated in forced sterilization programs, high-ranking members of the NSDAP, SS and SA: During the post-war period, the German Interior Ministry was full of people who, "today would have to be classified as Nazi perpetrators."

That is the conclusion of a study conducted for the interior ministry by independent researchers at the Center for Contemporary History (ZZF) in Potsdam. It was presented on Wednesday in Berlin. Over the course of 11 months, historians studied the personnel files of employees at West Germany's Federal Interior Ministry, as well as the Ministry of the Interior of former communist East Germany between the years 1949 and 1970. They found, says ZZF Director Frank Bösch, a "spectacularly high" number of employees with Nazi pasts in both agencies.

Two-thirds of officials were Nazis

According to their findings, half of all employees at the West German Interior Ministry were former Nazi party members. Between 1956 and 1961 the percentage was as high as 66 percent - the highest known percentage of former Nazis in any West German ministry.

Bösch went on to say that he was surprised that 14 percent of all employees at the East German Ministry of the Interior were also former NSDAP members. That number exceeds what researchers have assumed until now, and, says Bösch, is dramatically higher than internal GDR statistics. 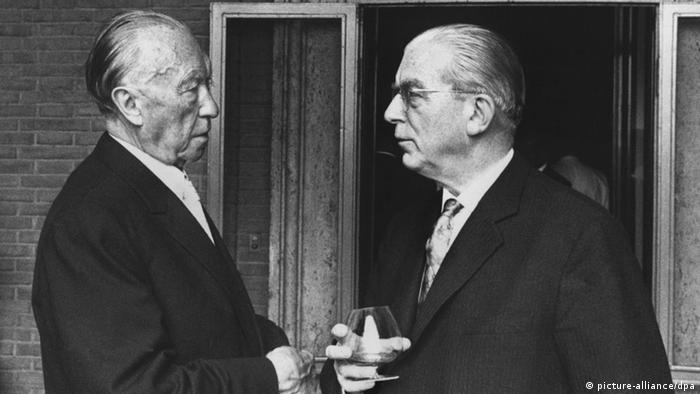 But how could it be that both ministries, responsible for major aspects of politics and society, and which in theory had gone through the process of "de-Nazification," could nevertheless be characterized by such a large number of Nazis? Trained staff was rare after the war, explained the study's authors, governments did not want to do without a certain amount of expertise - not even in the GDR. And so, officers that had careers in administration, justice and police in the days of National Socialism, also found employment after the war, often in the highest levels of politics and administration.

Personal politics were also decisive: People helped their former NSDAP buddies, and according to the study, a broad network of former Nazis played a "major role" in the hiring of former NSDAP members. This was also the case in the Chancellor's Office under its Director Hans Globke, a co-author of the official legal commentary of the Nuremberg Laws, which revoked the citizenship of German Jews. Globke was a close confidant of Chancellor Konrad Adenauer (CDU) and had great influence over the hiring of high-ranking officials. Beyond that, many applicants simply lied about their Nazi past. Stefanie Palm, a doctoral candidate who combed through hundreds of personnel files from the Cultural Department, told DW that, "a large number of them lied during the recruitment process." But even in cases where their past came to light, there were absolutely no consequences. "That is quite staggering," said the historian.

It is obvious that officials' past work influenced policy and legislation decisions: The study's authors point to the fundamentally anti-Semitic attitude of the Foreign Affairs Department in the Federal Ministry of the Interior as well as to the censorship practices of the Cultural Department as clear evidence of this. During today's presentation, Interior Minister Thomas de Maizière announced that he has given the project team two and a half more years to continue their research in order to get to the bottom of this issue, and to more accurately quantify the aforementioned influences.

That is not something that is to be taken for granted: For years the ministry refused to confront its past. As recently as 2005, then Interior Minister Otto Schily (SPD) stated that there was "no National Socialist past worth clarifying" in his ministry, and de Maizière also hesitated to do so for the longest time. Now he says that it is the duty of ministries to investigate their Nazi past.

That is a duty that the Chancellor's Office, however, has not yet taken up - despite its former director and Adenauer confidant Hans Globke, who made his career working with the Nazis and was ultimately influential in the determination of German post-war policies.

Serge and Beate Klarsfeld have tirelessly documented Holocaust victims and exposed their perpetrators. UNESCO has now enlisted the couple as educators on genocide prevention. (26.10.2015)

Reinhard Strecker faced slander and death threats after his 1959 exhibition exposed the Nazi past of dozens of post-war German judges. Ben Knight reports from a discussion in his honor at the Justice Ministry in Berlin. (08.10.2015)