Five years after the introduction of the German welfare reform known as Hartz IV, the Constitutional Court is to hand down a key ruling that could see benefits increase. But what does Hartz IV actually consist of? 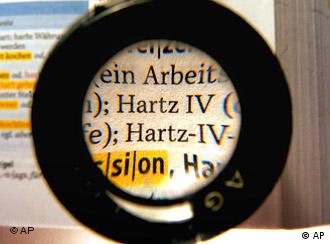 Germany's social welfare benefit, known as Hartz IV, remains stubbornly unpopular five years after its introduction. An opinion poll carried out last week by the magazine Stern found that 61 percent of Germans consider the current unemployment allowance, at 359 euros ($491) monthly per person, not including rent, too low. Only 30 percent said this was high enough.

The introduction of Hartz IV in 2005, which subsumed social welfare into the unemployment benefit system, had a major impact. It sparked protests across the country and a rift in then-Chancellor Gerhard Schroeder's Social Democratic Party (SPD). This ultimately split Germany's center-left, led to the creation of the more radical and populist Left party, and permanently weakened the SPD in subsequent elections, most notably last September.

Hartz IV was the central plank of Agenda 2010, a sweeping set of social reforms that would become Schroeder's legacy.

"In the future, no-one will be allowed to rest at the expense of society. Anyone who refuses reasonable work, can expect to face sanctions," Schroeder told the German parliament on March 14, 2003, as he presented the country with his all-encompassing scheme. 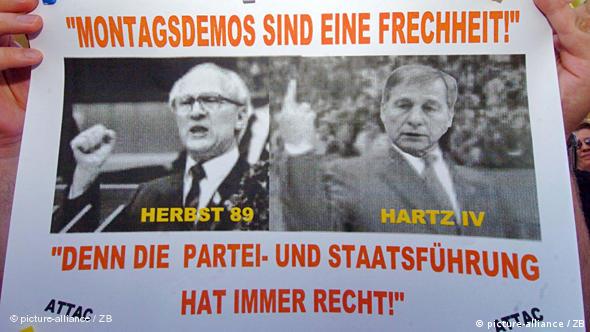 Agenda 2010 - the German contribution to a dynamic EU

Agenda 2010 was billed as the biggest single social reform of post-war Germany, a series of measures that were to change how the government organized education, health insurance, pensions, family policy and the job market.

It took its name from a target set in Portugal in 2000 by the European Union. The so-called Lisbon Strategy promised, by 2010, to make the EU "the most dynamic and competitive knowledge-based economy in the world, capable of sustainable economic growth with more and better jobs and greater social cohesion, and respect for the environment."

Agenda 2010 was to be Germany's all-important contribution to this, and Hartz IV was at its heart. Named after the man who masterminded it, Peter Hartz, personnel director of auto giant Volkswagen, Hartz IV's immediate aim was to reduce the costs of the overburdened social welfare system.

Hartz's reforms were split into four laws, officially called "Laws for Reform of the Job Market," or Hartz I through IV, staggered between January 2003 and January 2005. 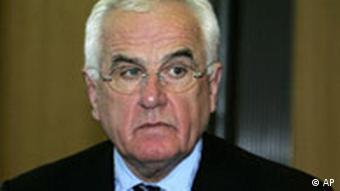 Peter Hartz was not a popular man among the country's poor

Hartz IV was the final and most radical of these laws. It bound together all social welfare allowances - from day-to-day requirements, to school books to clothing, all of which had to be applied for separately - into one flat sum, and named it "Unemployment Benefit II." This became the allowance an unemployed person receives after their official "Unemployment Benefit I," an allowance based on their previous income, ran out after a certain period.

Hartz IV centralized both these benefits through the Bundesagentur fuer Arbeit (Federal Labor Office), rather than separate regional offices. Its intention was to prioritize getting people back to work, in whatever form: temporary, part-time or full-time.

Hartz IV also limited the period of time that the regular "Unemployment Benefit I" would be paid to 18 months, putting more pressure on the unemployed to find work. In 2007, the coalition government of CDU and SPD softened this slightly, raising the time limit to 24 months for people over 58.

Hartz IV also set specific benefits for the children of the unemployed, with children between seven and 13 receiving 60 percent of the payment, and 14 to 17-year-olds receiving 80 percent, both of which were significant reductions on the previous allowances for children.

This last regulation has now become a contentious issue, after legal complaints about the fairness of the children's payments have led all the way to Germany's Constitutional Court. Many argue that an arbitrary percentage of the full benefit, based on two arbitrary age brackets, is simply an unfair way of assessing a child's needs, and therefore in breach of the constitution's commitment to providing for the people. Last year, a Hesse state court and the Federal Social Court ruled that Hartz IV's children's benefits were unconstitutional. 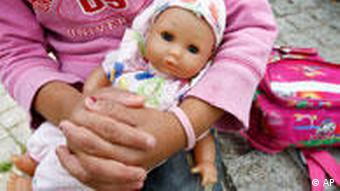 After nearly four months of deliberation, the Constitutional Court's definitive and potentially far-reaching verdict is expected on Tuesday. If it agrees with the other courts, it could force a complete re-assessment of how the Hartz IV benefit is calculated for adults as well as children. This would probably mean that Germany's unemployed would end up with more money.

Despite the German population's barely-diminished resentment of Hartz IV, Schroeder is unrepentant, recently remarking "we're seeing more and more that it was good and right."

Those in power today seem to agree. Schroeder's successor and former political rival, Angela Merkel, used her first address to parliament as chancellor in November 2005 to make this startling statement: "I would like to thank Chancellor Schroeder personally for bravely and resolutely opening a door with Agenda 2010, so that our social systems could be adapted to a new era."

Hartz IV was a fundamental shift to the right in German social policy, fracturing the country's foundation on a strong welfare state. If the Left party, which was partly born of the popular discontent with Agenda 2010, ever came to power, Hartz IV might be the first casualty. But as the Constitutional Court's deliberations show, many people on left and the right agree that the reform is in need of reform.

The number of social assistance recipients in Germany is on the rise - and the more that join the welfare rolls, stay on them, researchers say. (15.12.2009)

Initial hearings on the unemployment benefit reform known as Hartz IV have thrown doubt on the constitutional legitimacy of the methods by which the standard payment rates are calculated, for adults as well as children. (20.10.2009)