The Morel Plan: Will Kyiv swallow the bitter pill? | Europe| News and current affairs from around the continent | DW | 02.10.2015

The Morel Plan: Will Kyiv swallow the bitter pill?

Pierre Morel presents a compromise that could help the West and Russia come to a peaceful solution of the Donbass conflict. However, the plan is not welcome in Kyiv. 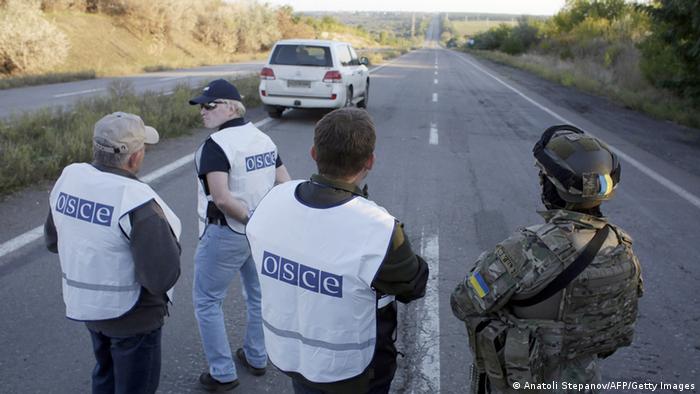 The fight over elections in the Donbass region in Eastern Ukraine is endangering the Minsk Protocol. Kyiv insists that local elections, which are scheduled to take place in Ukraine on October 25, also be held according to Ukrainian law in Donbass. But the self-proclaimed "people's republics" of Donetsk and Luhansk have set a different date, and do not intend to consult Kyiv on the vote. 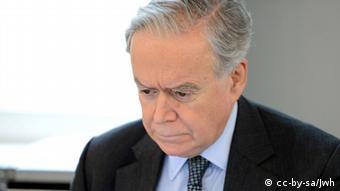 Now, there may be a way around the impasse. French diplomatic veteran Pierre Morel, chairman of the working group on political affairs of the Trilateral Contact Group (TCG), consisting of representatives from Ukraine, the Russian Federation and the Organization for Security and Co-operation in Europe (OSCE), and engaged in the peaceful solution of the conflict in Donbass, has presented a new plan. According to media reports, the plan envisions the passage of a special law by the Ukrainian parliament in Kyiv, after which, separate Donbass elections could take place.

The compromise proposes that elections would be held in compliance with Ukrainian law, as Kyiv wishes, but that the as yet recognized "republics" would have the possibility of staging them as their own rules see fit. Thus, says the plan's author, the path to full-fledged political dialog and the implementation of the Minsk Protocol would be free. The protocol stipulates that the Donbass remain part of Ukraine and that Kyiv re-establish its sovereignty over the region.

Kyiv is not enthusiastic about Morel's plan. Ukrainian President Petro Poroshenko said he considered it to be nothing more than "Morel's personal opinion." Oleksiy Makeyev from the Ukrainian Foreign Office was less dismissive when he told DW that Ukraine does not reject the "Morel Plan" out of hand and that it could consider it as one among several proposals. Nevertheless, he went on to emphasize, that for Kyiv, the Minsk Protocol remains the guiding document. 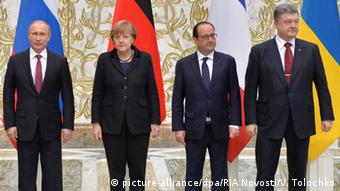 Peace talks on Ukraine held by the Russian, German, French and Ukrainian leaders

But other participants in the "Normandy format," a diplomatic group consisting of senior representatives from Germany, the Russian Federation, Ukraine and France, view things differently. The German Foreign office stated that Berlin considers the "Morel Plan" to be the basis for a further solution to the Donbass conflict. That statement reflects the sentiments that German Foreign Minister Frank-Walter Steinmeier expressed after talks with the foreign ministers of the "Normandy format" in Berlin, on September 12. Russian Foreign Minister Sergey Lavrov also proposed supporting Morel's idea. In a statement to DW, the French Foreign Ministry indicated their approval of the plan as well.

In Ukraine, the "Morel Plan" is seen as an ultimatum. Maria Zolkina of the "Democratic Initiatives Foundation," a Kyiv-based research center, told DW that Western partners were forcing Kyiv into a compromise and using the leverage of economic and political dependency on the West to that end. Zolkina warned that if Ukrainian leadership were to go along with the "Morel Plan" the "quasi-republic" would automatically be recognized as a de facto subject. "Ultimately, we would have to support the region economically, but would have no say there politically," according to the expert. 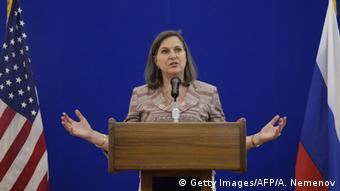 Andrew Wilson from the European Council on Foreign Relations (ECFR) also sees risks for Kyiv. He told DW that Morel's proposals belong in the "wastebasket." He added that Russia was simply attempting to "Chechnify" the problem. Donbass' formal affiliation with Ukraine, he says, would allow Moscow to destabilize the rest of the country. According to Wilson, Kyiv could reject Morel's plan and invoke the Minsk Protocol.

But in the opinion of French security and policy expert Mathieu Boulegue, Ukraine has much less room for diplomatic maneuvering today, because of its current economical and political situation. "Ukraine has to accept a compromise. The Ukrainians know that, but the problem is they don't want to," as Boulegue told DW.

Direct talks between Washington and Moscow?

As DW has learned from diplomatic circles in Paris, the "Morel Plan" is most likely not a purely European offer. Several proposals for the implementation of the Minsk Protocol have already been directly discussed between Washington and Moscow. In May, Assistant US Secretary of State for European and Eurasian Affairs Victoria Nuland said that Washington wanted to strengthen its role in the settlement of the Donbass conflict.

According to the Paris sources, general outlines for compromises on contentious issues were discussed between Nuland and Russian Deputy Foreign Minister Grigory Karasin in late July. Afterward, Morel was tasked with working out the details. Upon preliminary approval of Morel's proposals, French President Francois Hollande called for a meeting of the heads of state participating in the "Normandy format" in Paris this October.

Ukraine has opened its trial against two alleged Russian soldiers accused of fighting alongside separatist forces. Government forces captured the men in May. (29.09.2015)