Neo Rauch is one of Germany's most successful contemporary artists. A solo exhibition of his work has opened at the Metropolitan Museum in New York. It is both an honor and a challenge for the painter. 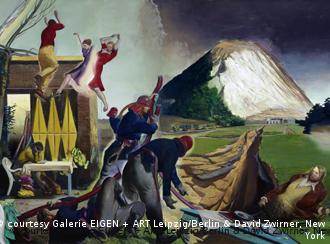 German artist Neo Rauch has painted 14 new works specifically for his solo exhibition, which opened Tuesday at the Metropolitan Museum of Art in New York.

"For me, painting means the continuation of a dream with other means," Rauch said in a statement. He said he was inspired by misplaced memories and momentary perceptions that were lost before they could be named. 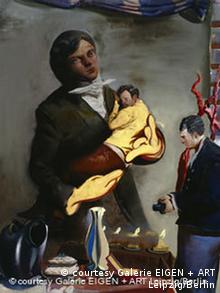 Rauch therefore chose the title para for his exhibition -- a play on words such as paranormal, parallel and paradox, he said.

"On my canvas, in my head, everything is possible," Rauch said. A painting of a young man cradling an older man the size of a baby in his arms, for example, commemorates Rauch's father, who died very young.

Rauch plays it by ear

According to curator Gary Tinterow, Rauch belonged to the most widely acclaimed painters of his generation. The museum was therefore very happy to have won him for the series, Tinterow said.

Yet the museum allocated Rauch a room with unusually low ceilings and no natural light -- posing a challenge to the artist. Rauch said he thought about how to fill this room rhythmically in planning his works instead of following a specific theme.

"That is a specific characteristic of my work anyway, that I can play it by ear," Rauch said.

The 47-year-old Leipzig native was shaped by his experience of growing up in East Germany.

Rauch entitled this painting "Waiting for the Barbarians"

"The artist's paintings conjure up an atmosphere of confused nostalgia and failed utopias," the Met said. Rauch's work had connections to surrealism, socialist realism and pop art. But ultimately, it stood for itself.

"Although there are many familiar elements in the parallel world of Rauch's paintings, the situations depicted are bizarre and the normal is mixed freely with the abnormal," the museum said.

Rauch studied at the Leipzig Academy of Visual Arts and now teaches there as a professor. He is the forerunner of the so-called New Leipzig School, an artistic movement marked by social realist figure painting with enigmatic narratives and surrealist overtones. 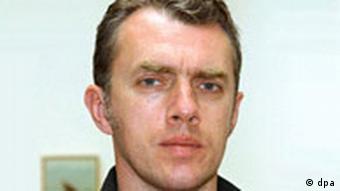 Neo Rauch still works in his home town of Leipzig

Rauch is only the third artist in the Metropolitan Museum's series dedicated to artists at mid-career, following exhibitions by American artists Tony Oursler in 2005 and Kara Walker in 2006.

The Neo Rauch exhibition runs through September 23, 2007. It will then travel to the Max Ernst Museum in Brühl, Germany, where it will run from October 2007 through March 2008.

From East Germany to Easy Street

In the GDR, Gerd Harry Lybke was barred from working life. Today, he can take much of the credit for the popularity of the New Leipzig School, which has put Germany in the international vanguard of fashionable painting. (05.10.2005)

All of a sudden, a group of artists that passed through Leipzig's Academy of Visual Arts is the toast of the collecting world. There are unofficial waiting lists for paintings that haven't been painted yet. (12.02.2005)