All of a sudden, a group of artists that passed through Leipzig's Academy of Visual Arts is the toast of the collecting world. There are unofficial waiting lists for paintings that haven't been painted yet. 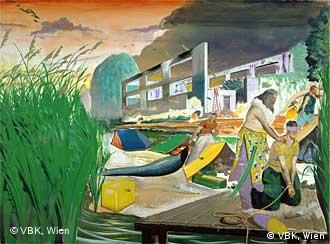 Neo Rauch, one of the Leipzig School's much-hyped students

A few years ago, when painting was still considered somewhat anachronistic and passé, Professor Arno Rink continued to teach his students brush techniques and graining, glazing and lifting.

If people might have snickered back then, they've come around completely in recent months. The very students Rink has been teaching are now the toast of the international art scene. The "New Leipzig School" is being touted in important trade publications like The Art Newspaper ("The Future is German") and The New York Times ("Art Stars of the Decade") as the must-have in every collector's den.

The upcoming open house (Feb 11-12) at the Academy of Visual Arts in Leipzig, where Rink teaches, is a must on this year on every gallerist's calendar.

"We are definitely going there," said Elke Hannemann, a director at the Berlin gallery Eigen + Art, which also has a gallery in Leipzig. "With the really big focus on Leipzig at the moment a lot of people will of course come to look around."

Sold out in 18 minutes

The buzz is centering on a group of artists, all around the age of 30, who at various points in recent years have gone through the Leipzig academy. Neo Rauch, Tim Eitel, Martin Eder and David Schnell are winning monumental praise for their paintings, both landscapes and abstracts. 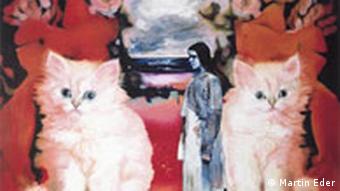 "Thoughts upon leaving my head" by Martin Eder. His works sold out in 18 minutes at Art Basel last Fall

At the Art Basel trade fair in Miami Beach last fall, all five of Eder's pieces sold for €36,000 each -- 18 minutes after the fair opened. Rauch was awarded the European art award "Vincent 2002" last year. The prize money of €50,000 is the highest awarded to contemporary European artists.

There's even an unofficial waiting list for works by the four talents that haven't even been produced yet.

The academy, as well, is getting its fair share of the spotlight. This year there were 988 people who applied at the school, for 80 spots. Academy spokesman Marion Sprenger said she expected a "few thousand guests" at the open house. 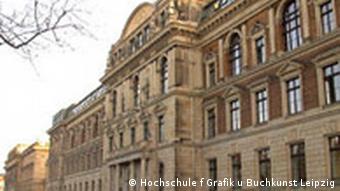 Where does all the new love for painting come from?

"At one point museum visitors simply get tired watching 20 minute (art) videos, and feeling like lugs if they leave before they're over," said Gerd Harry Lybke, Eigen + Art's owner.

If a piece by one of the protégés does get sold, it usually gets passed on to a museum to hang initially. As a result, the Museum for Modern Art in Leipzig currently has an entire room filled with Rauch's work.

Cool words from a pro

With all the excitement, it's easy to go overboard, which is why renowned collector Rudolph Udo Scharpff is urging caution. In his 40 years of collecting, he's seen more than a few trends come and, inevitably, go again.

"The artists are still so young. You have to still wait and see what will come in the future," said Scharpff, who is 75. "If an artist is good, he'll be even better in five years."

He estimates that the hype will last another two years before it cools again and young professionals wanting something "for their loft" will look elsewhere.

"You shouldn't look at it from a money perspective," said Scharpff. "Instead, we should be happy that we have such a generation of painters in Berlin and Leipzig."

Of course, Scharpff has already bought up several of the Leipzig school's pieces.

Even as the clock ticks on the opening of his large contemporary art exhibition in Berlin, controversial German art collector Flick is still fending off accusations related to his grandfather's Nazi past. (Sept. 2, 2004)

Unhappy with the long entrance lines, art fans are directing criticism at the organizers of Berlin's MoMA exhibition. Now, a notable art critic is accusing the New York curators of cultural colonialism. (Aug. 18, 2004)

A controversial exhibition based on the life and times of the Red Army Faction, Germany's own notorious terror group, opens in Berlin on Saturday in the face of continuing opposition. (Jan. 29, 2005)