The Marshall Plan: Rebuilding a War-Torn Continent | Europe | News and current affairs from around the continent | DW | 05.06.2007

The Marshall Plan has long been heralded as the most successful foreign aid program in history. The speech that outlined the ambitious plan was made 60 years ago today. 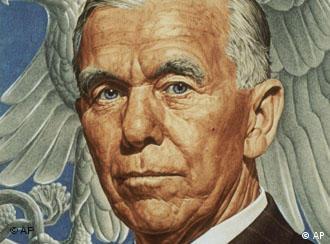 The speech was without fanfare and lasted only 12 minutes, but it signaled a shift in the post-war era and heralded great changes to come.

On June 5, 1947, US Secretary of State George C. Marshall addressed the graduating class at Harvard University in Cambridge, Massachusetts. Within days, his recommendations became known as the Marshall Plan, which has gone down in history as the most successful civil-reconstruction project of the 20th century.

"The Marshall Plan served as the economic and political foundation for the Western alliance that waged the Cold War," said Diane Kunz, a professor of history at Yale University. "It allowed the United States gradually to engage itself in the bipolar confrontation by first committing money, not blood."

Historians, however, disagree on how large a role the Marshall Plan money played in Europe's economic recovery.

Marshall's speech offered few details, but the powerful impact of his ideas, militarily and politically, were designed to make an imprint on Europe for decades after the end of the war. 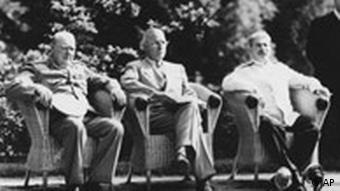 The plan began two years after the Potsdam Conference

After the war, the United States -- infrastructure intact and economy prospering -- had a clear sense of where it was headed. By contrast, experts were predicting financial and social collapse in Europe.

Marshall, a future Nobel Peace Prize winner, said at Harvard that his proposal was "directed not against any country or doctrine but against hunger, poverty, desperation and chaos." He laid out his plan based on the initiative of the Europeans and on their faith in the economic future of their countries and of Europe as a whole.

"It is logical that the United States should do whatever it is able to do to assist in the return of normal economic health in the world, without which there can be no political stability and no assured peace," Marshall said.

Within weeks of the speech, European governments -- led by France and Britain -- began drafting Marshall's spending plan. Essentially, the plan was about supplying German importers of life-sustaining goods with hard currency.

By the end of the Marshall Plan in 1952, five years after Marshall's speech, the United States had invested more than $13 billion in goods and financial services, equal to $100 billion today (74.3 billion euros). About $1.4 billion of the initial total was invested in rebuilding a Germany that had been reduced to a landscape of rubble. 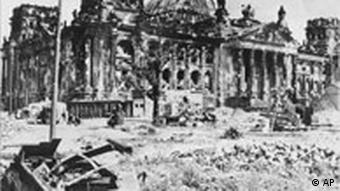 Germany was the fourth biggest recipient of US aid

The offer of US help was made to all European countries. The top four recipients of aid, in descending order, were Britain, France, Italy and Germany. Moscow set the tone for the coming Cold War, with a clear "nyet" that forbade the East European countries under its heel from accepting the largess of the capitalist benefactor.

No one doubts that the Marshall Plan contributed mightily to cementing the division of Europe and the world.

Washington's intensions were plain: only with prosperity could Western Europe become a bulwark against communism. The Marshall Plan helped make Europe's hungry masses reliable partners for the US.

The designers of the Marshall Plan cannot take all of the credit for this record of success. Local resources accounted for 80 to 90 per cent of capital formation in the major European economies during the first two years of the recovery program, according to University of Iowa history professor Michael Hogan, a prominent expert on the Marshall Plan.

Yet, the Marshall Plan provided the "critical margin" of support that made European self-help possible. It fuelled essential imports, eased production bottlenecks, encouraged higher rates of capital formation and helped to suppress inflation, Hogan wrote in a paper marking the 50th anniversary of Marshall's speech.

All these effects led to gains in productivity, improvements in trade and the most durable era of social peace and prosperity in modern European history. 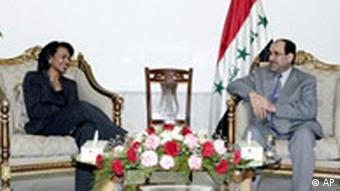 The ideals of the Marshall Plan have been invoked countless times by well-meaning people, facing the tasks of rebuilding regions torn by crisis or failed states from Latin America to the Balkans and, now, Iraq.

There have been so many references that Larry Bland, director of the George Marshall Foundation, has stopped counting.

Historians wave aside calls for a new Marshall Plan, saying the structures and historical situation after World War II were unique. The Marshall Plan, in a sense, oiled the gears of existing machinery -- it did not bear the burden of bringing trade and forging modern political structures in places with no experience of them.

Western Europe for centuries had known the rule of law, democracy and private property and initiative. The US was dealing with people who knew what to do and who knew the importance of the middle class, Bland said. They were people who didn't need to be taught democracy and free enterprise.

Germany to Hike Development Aid Ahead of G8 Summit

German Chancellor Angela Merkel has announced a bigger-than-expected boost in German development aid, a week before the Group of Eight (G8) summit where she aims to make Africa a key issue. (01.06.2007)

German Chancellor Angela Merkel proclaimed development assistance for Africa is one of the key points at the G8 summit in Heiligendamm. (22.05.2007)

Irish rock stars Bono and Bob Geldof on Tuesday accused G8 nations of falling far behind on pledges of aid to Africa and put pressure on Germany as current head of the club to donate nearly one billion dollars. (15.05.2007)