The lure of gold in Tanzania

36 million ounces of gold: Tanzania is sitting on a billion dollar gold mine. Many local residents are willing to risk their lives just for a few grams. 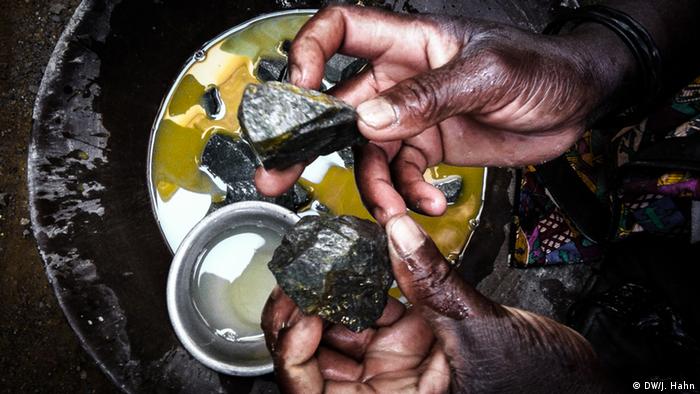 Kewanja lies on the northwestern tip of Tanzania, only 30 minutes from the border to Kenya. It is shortly after midday when the news arrives. There was another controlled explosion in the gold mine, the trucks are bringing new stones.

Now everything has to go very fast. Men and women, young and old, rush to the huge mountain next to the village road. Some are armed with machetes and sticks. They scuttle and clamber, dig and collect – in the hope of finding small bits of gold amongst the debris. A few moments later gunshots are fired into the air. Two police officers in green uniforms appear on the top of the mountain. The warning is clear and the villagers retreat. At least for the moment.

The rush to the mine has become a daily ritual in Kewanja, for many it has become their job. They call themselves “intruders”. The grey mountain of debris is owned by African Barrick Gold (ABG), a subsidiary of the biggest gold company in the world: Barrick Gold, which is based in Canada.

The stones are a waste product from the open-pit mining operation but the company insists on guarding them. For many in Kewanja, it is their only source of income. Almost every third person works as an “intruder”, sources in the area estimate, especially young men, youths and even children.

“I am not proud of this, but we don't have a choice”, says a young man, who is wearing a dirty shirt and does not want to disclose his name. “We don't have jobs, no income. It is not a good job but we have to live from something.” The “intruders” sell the stones to middlemen. These are then processed into gold dust and nuggets. 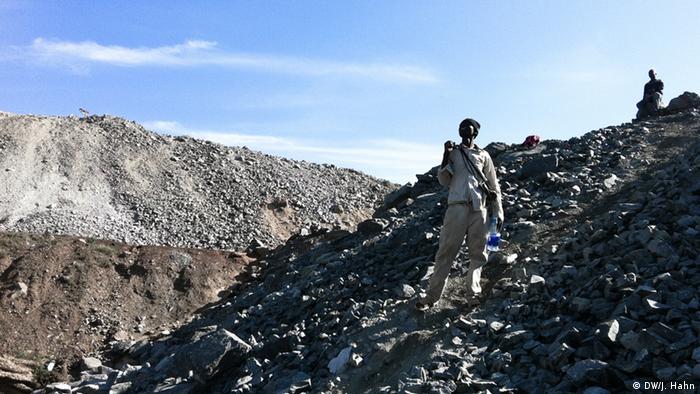 Jumanne is an "intruder". He gathers precious stones from the mine's waste mountain.

Every day the "intruders” risk their lives. Private security personnel and Tanzanian police guard the site. Some of the police are corrupt, the “intruders” say. For a bribe, they might look in the other direction for a few minutes. As soon as the situation escalates, however, they shoot with live bullets. Local newspapers often carry reports of deaths and injuries. In 2012, at least eight people died in or just outside the mining vicinity in North Mara.

The mining company itself provides no information about casualties, and the anger of the “intruders” is growing. “Barrick does not care about the people here. That is why they shoot at us, as if we were dogs,” says the young man with the dirty shirt. His friends nod in silent agreement.

The number of deaths in recent years is alarming, says a report by the Legal and Human Rights Center (LHRC), which is based in Dar es Salaam. In most cases the perpetrators are not convicted, says Helen Kijo-Bisimba, the director of LHRC. In late 2012, the LHRC filed a complaint to the United Nations and the International Criminal Court in The Hague.

Big money in the ground 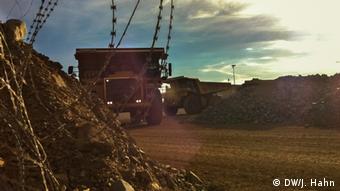 Trucks transport the gold rocks after a controlled explosion.

The open-pit mine in North Mara has left a huge scar in the earth. The precious metal, of which 170,000 ounces (4.8 tonnes) were brought to the surface in 2011, is excavated from the ground with controlled blasts. The rock is processed in a gigantic processing plant. In 2011, ABG made a profit of over 200 million euros (US$267) in North Mara alone.

Several operators have managed the mine over the years. ABG took over in 2006. The company has been operating in Tanzania for over a decade and currently runs four of the country's gold mines. According to ABG, 360 of its employees in North Mara come from the surrounding areas. Another 1,500 residents are indirectly linked to ABG via service providers. One cannot really speak of a job miracle for the region, considering that the mine only provides few jobs for the estimated 70,000 residents. High profits and little work: a typical problem for the raw materials sector. 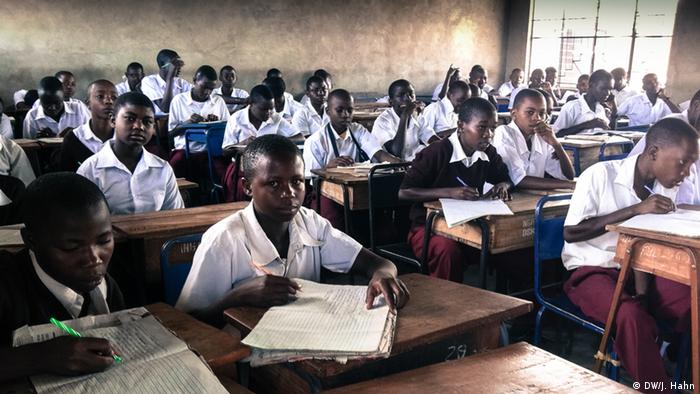 ABG insists it is aware of its a social responsibility in Tanzania. In North Mara, the company has established a “Community Relations” department. The team is made up of 17 men and women. They tour the area like social workers, talking to village and community elders.

The team also manages the company's social projects. For instance African Barrick Gold's flagship project: Ingwe Secondary School, only a few minutes by car from the mine. The company renovated the school's dilapidated classrooms in 2012. A canteen and further school buildings are currently being constructed by local contractors. This creates jobs, ABG's spokeswoman points out. Headmaster Joash Mageka praises the company's commitment:

“In the past, many students would join the “intruders” after class. Now there are not so many. Education helps,“ he told DW. 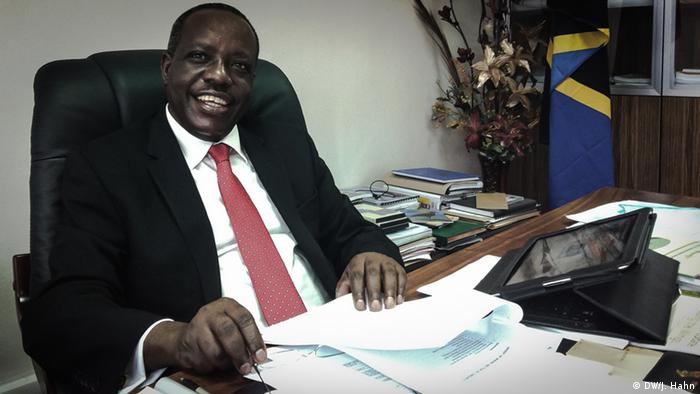 Sospeter Muhongo, Minister for Energy and Minerals, in his office in Dar es Salaam.

The school is not ABG's only project. It has also invested in a hospital, a water treatment plant, training courses as well as malaria and HIV programs. According to company information, ABG has spent 20.6 million dollars on social projects in Tanzania since 2010. This is less than one percent of its total earnings. The company claims that the majority of these funds flow into North Mara. Yet how does such commitment go together with the almost daily outbursts of violence in the region? ”With time, continuity and the establishment of trust between us and the community, we will manage to gain the respect of the communities,” says mine manager Gary Chapman.

Up to 1992, Tanzania was a one-party socialist state. Foreign investors were not allowed into the country, and consequently a modern mining industry was not able to establish itself. For a long time, the villagers themselves mined the gold, in small amounts of course, but it sufficed to make a living. The international companies arrived in the late 1990s. Since then, there is hardly any room left for artisanal miners.

Kewanja is one of seven villages in the area of the gold mine. It is one of the poorest parts of the country, remote and neglected by the state. The roads here are littered with potholes. Running water and electricity are a luxury. The majority of the population live off less than one dollar a day.

Most of the people here belong to the ethnic Kuria group. Traditionally, they are agri-pastoralists who live in the border region between Kenya and Tanzania. 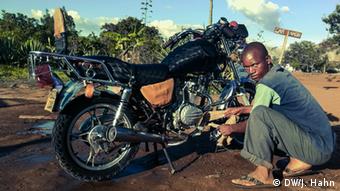 So what is amiss in North Mara? Sospeter Muhongo, the Minister for Minerals and Energy, comes from North Mara himself. He is a geologist and has only been in his post for a few months. He plans to take a stronger stance on the obligations of multinational companies and on matters of taxation. He says artisanal gold miners should be given new areas to mine. Yet how all this will work is currently unclear.

“We have tried everything and we will continue to do our best, to guarantee peace and security in the region,” says the minister. “To achieve this, we must most importantly invest in education. If people are educated, they start to think differently.” The minister, however rejects any notion of past political failures.

Businesses on both sides of the law

It would be a massive exaggeration to speak of an economic upturn in North Mara. Yet the gold is attracting foreigners to the region. David Aruma and his pregnant wife moved here a year ago from neighboring Kenya. David, 25 years old, started a small carwash business in Kewanja. His wife sells bananas and petrol in plastic bottles.

David cleans the villagers' motorbikes with a high pressure machine. His best clients are the “intruders”, many of whom have been able to make a reasonable amount of money. The bikes, known here as “piki piki”, sport stickers of London's Chelsea football club. Some attach little radios and loudspeakers to their machines. In one of the Tanzania's poorest regions, they are a symbol of relative wealth.

“Most ‘intruders' are either shot dead or injured”, says David as he polishes a bike. “Personally, I don't always want to be scared of being caught by the police. That is why I started this small business. In this way, I feel free.”

David earns about 50,000 Tanzanian shillings a day. This is less than 25 euros. It is not gold, he says, but honestly earned money.

With much of its gold reserves deposited abroad, Germany has long depended on foreign countries to secure its precious metals. Now, Berlin is moving some of its reserves from New York and Paris back home to Frankfurt. (17.01.2013)

Turkey is profiting from sanctions aimed at reducing trade with Iran by trading gold for Iranian natural gas and oil. The deal is a political risk and has raised eyebrows in Washington and Europe. (03.12.2012)

'Action needed' on uranium use in Tanzania

Mining: Tanzanian women are working for their share of the gold 13.07.2022

When it comes to mining, women have been traditionally excluded in Tanzania, but things are changing. In heart of the country’s mining district, women are demanding their share of the gold.

Magawa the rat retires after years of mine-sniffing in Cambodia 05.06.2021

The award-winning rodent is ending his five-year career, during which he sniffed out 71 land mines and 38 items of unexploded artillery.