The Left party trumps with anti-war card in election campaign | News and current affairs from Germany and around the world | DW | 09.09.2009

The Left party trumps with anti-war card in election campaign

The only party calling for an end to Germany's engagement in Afghanistan has moved up in recent polls. After a German-ordered airstrike killed scores in Kunduz last week, the Left's view is becoming more popular. 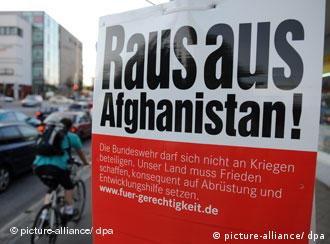 The Left wants Germany to get out of Afghanistan

The campaign signs for Germany's Left party send a clear message: "Out of Afghanistan!" It's a sentiment widely held by many Germans and has increased since a German commander in Afghanistan ordered an airstrike on two fuel tankers, hijacked by the Taliban last week, that left scores of people dead, including civilians.

While the future of the 4,200 German troops currently deployed in Afghanistan is a political issue, politicians from Chancellor Angela Merkel's ruling Christian Democrats (CDU) and their coalition partner, the Social Democrats (SPD), say last week's attack will not change government policy on Afghanistan. With the exception of the Left party, the rest of Germany's major parties are in favor of continuing the country's mission in Afghanistan.

But the latest weekly election polls, released on Wednesday, suggest that the attack may be influencing voters. A survey by the Forsa-Institut shows an increase of four percentage points for the Left party, to 14 percent, while an IfD Allensbach poll gave the party a 2 percent increase over last week, to 11.5 percent.

Back in 2002, German Chancellor Gerhard Schroeder campaigned against the US-led Iraq war and won re-election by the narrowest of margins, picking up many votes with his anti-war rhetoric. 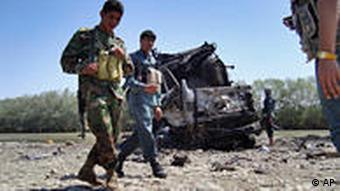 Last week's NATO airstrike may have boosted the Left party

The Left is the only party in Germany that's taken a clear stance against the deployment of German soldiers in Afghanistan. In a meeting of the Bundestag, Germany's lower house of parliament, about the attacks on Tuesday, Left party co-leader Oskar Lafontaine reiterated his party's stance.

The former SPD leader and finance minister under Chancellor Schroeder dismissed any talk of forming a coalition with the Social Democrats and Green party.

"The Social Democrats and the Greens still support our troops staying in Afghanistan and we want to bring them home immediately. So long as interests are diametrically opposed nobody needs to speculate about any coalition with the SPD and Greens after the Sept. 27 election," Lafontaine said.

Supporters of the Left party made their voices heard at a demonstration against the German involvement in Afghanistan held at Berlin's Brandenburg Gate on Tuesday.

"You can never stabilize Afghanistan with an army," one Left party campaigner told Deutsche Welle. "I understand that we have a huge problem in Afghanistan and the Taliban are not our friends - let that be clear! But in the past eight years it's only been about war and killing people and we haven't got anywhere."

Other parties slip in polls

While the far-left are riding higher in the polls, the ruling Christian Democrats and Social Democrats (SPD) have dipped slightly.

The CDU received 35 percent in both surveys, dipping by 0.5-1 percent. The CDU's preferred coalition partners, the Free Democrats, brought in 13-14 percent, which would leave the two parties just shy of the required 50 percent majority needed to form a coalition.

The Social Democrats slipped similarly, to 21-22.5 percent. Their preferred coalition partners, the Greens, polled 10-13 percent. Even if the Left were included in a coalition with the SPD and the Greens, the current surveys indicate they would not have the necessary majority to form a government.

The Left Party, descendants of the former ruling party of communist East Germany, made big gains in Sunday's polls and is poised to enter governments in both eastern and western Germany. (30.08.2009)