Merkel defends German involvement in Afghanistan | Germany| News and in-depth reporting from Berlin and beyond | DW | 08.09.2009 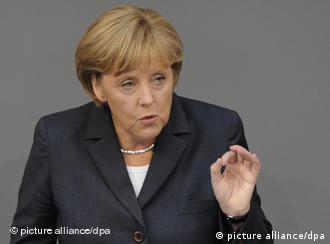 Angela has promised a full report on the Afghanistan airstrike

Addressing Germany's lower house of parliament, the Bundestag, on Tuesday, Merkel expressed her "deep regret" for any civilians killed in last week's airstrike which targeted Taliban militants and was requested by German forces near Kunduz in Afghanistan.

"Every innocent person who is killed in Afghanistan is one too many," Merkel told parliamentarians in Berlin.

While promising a thorough investigation and a full report on the raid, which is believed to have left dozens of Taliban militants as well as civilians dead, Merkel slammed critics for drawing premature conclusions.

On Saturday, French Foreign Minister Bernard Kouchner had called the airstrike a "big mistake." Afghan President Hamid Karzai had told French daily Le Figaro in an interview published on Monday that the attack was an "error of judgment." 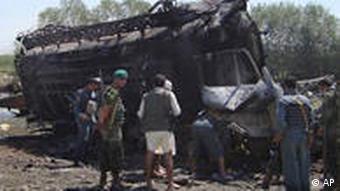 The German defense ministry on Monday described the airstrike as "militarily necessary and correct" because it prevented the Taliban from using the two hijacked fuel trucks as mobile bombs.

Germany Defense Minister Franz Josef Jung of the Christian Democrats (CDU) has faced criticism over his information policy as well as calls for him to step down. His ministry had initially said that the airstrike had only killed Taliban militants.

However, on Monday Jung was forced to acknowledge that he could no longer rule out any civilian casualties, and on Tuesday the NATO-led International Security Assistance Force (ISAF) in Afghanistan indicated for the first time that civilians were probably killed in the attack, however, without providing any exact casualty figures.

"Believing civilians were not in the area, the local ISAF commander authorized an airstrike, which destroyed the two fuel trucks," ISAF said in a statement. "Subsequent review has led ISAF to believe that along with insurgents, civilians also were killed and injured in the strike." 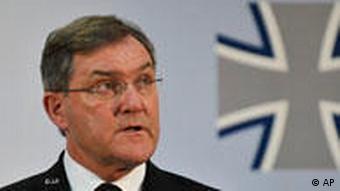 Not an election campaign

With all but one German political party supporting the government's stance on the Afghanistan mission, parliamentarians were quick to affirm on Tuesday that the tragic incident would not be exploited as a campaign issue ahead of the Sept. 27 national election. The only party in the Bundestag calling for the immediate withdrawal of Germany's 4,200 troops is the Left party.

"We want German troops out of Afghanistan because we are firmly convinced that the mission does nothing for international security, nothing for peace and is not the way to counter international terrorism," Oskar Lafontaine, the co-leader of the opposition Left told parliament on Tuesday.

However, the Left party and its leaders have a reputation in Germany for demanding what is currently popular rather than politically expedient.

Even before the airstrike controversy, a poll in July showed that up to 69 percent of Germans wanted their soldiers to pull out of Afghanistan. 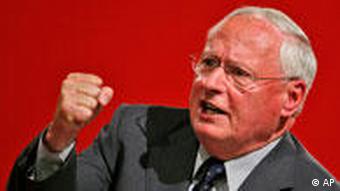 Oskar Lafontaine, co-leader of the Left party, wants Germany out of Afghanistan

Despite the German public's reservations over the Afghanistan mission, the chancellor has refrained from giving any pullout date for German forces, and she also sidestepped the issue during her speech on Tuesday. Instead, Merkel drew attention to what had brought international forces to the war-torn country in the first place.

"It was Afghanistan, controlled by the Taliban and al Qaeda, that was the breeding ground for the terror of September 11," Merkel said. "The September 11 attacks were followed by dreadful attacks in Europe - in Madrid and in London. We know too that Germany is in their sights ... The engagement in Afghanistan is our reaction to terror. That's where it came from, not the other way around."

Merkel also referred to a joint German-British-Franco proposal for an international conference this year to pressure the Afghan government to take on more responsibilities, enabling the withdrawal of coalition forces.

"For Germany, Britain and France, this conference is about creating the conditions for developing an internationally agreed handover strategy," Merkel said on Tuesday. "Our overriding political goal is and remains an Afghanistan that can handle its own security."

It was unclear where and when the conference would be held, but the United Nations, which is to host the event, has proposed Kabul as the venue.

A British journalist kidnapped in Afghanistan has been freed from his captors in an early-morning raid. Stephen Farrell and his interpreter were taken hostage while covering last week's NATO tanker bombing. (09.09.2009)

The NATO airstrike in Afghanistan on two fuel trucks hijacked by the Taliban has sparked a fresh debate on the international military presence in the country. DW's Sybille Golte examines the repercussions. (07.09.2009)

Listen to reactions to the deadly airstrike in Afghanistan (08.09.2009)