The Latest Incarnation of Jörg Haider | News and current affairs from Germany and around the world | DW | 05.04.2005

The Latest Incarnation of Jörg Haider

Once a reviled far-right leader whose policies threatened Austria's position within Europe, Jörg Haider announced on Monday his return to the political scene in the form of a more moderate conservative politician. 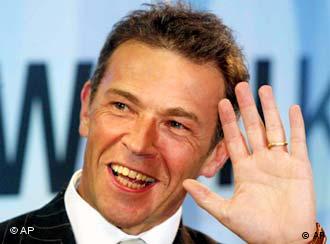 The politician formerly known to some as a xenophobic populist

Jörg Haider, the former leader of Austria's once powerful Freedom Party (FPÖ), announced on Monday that he will lead a new political movement. The new party hopes to take the place of the Freedom Party in Austria's coalition government and means the effective spilt of Haider's notorious former party.

After weeks of internal division and rumors of a split, Jörg Haider finally made it official. At a hastily called press conference , the controversial Austrian politician renounced his old party and said he would lead a new movement called the Alliance for the Future of Austria.

At the same time his sister, Ursula Haubner, who had been leading the party at the federal level, announced her immediate resignation from that position. Austria's Freedom Party, under Jörg Haider, was once Europe's most successful far right group, winning more than a quarter of the vote in national elections five years ago.

Considered hard to control, Haider's xenophobic outbursts riled the European Union so much that it slapped six months of sanctions on Austria in 2000 after the FPÖ entered the national government.

Since forming a coalition with the conservative People's Party of Chancellor Wolfgang Schüssel, however, the Freedom Party has been hit by crises and seen its popularity plummet. 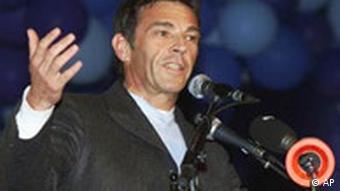 The new party is an attempt by Haider to re-establish himself and re-invent himself as a moderate politician, distancing himself from extremists in the Freedom Party who had grown increasingly critical. Details of the new party policy are sketchy but Haider told journalists he wants to continue the work of the current government.

"We want to fulfill the positive ideas of the Freedom Party's program, without any destruction by anybody, and be responsible to the Austrian people as a political party which stands in the government," Haider announced.

The Vice Chancellor and transport minister Hubert Gorbach along with the Social Affairs minister Ursula Haubner and a number of other senior figures have made their loyalty clear. 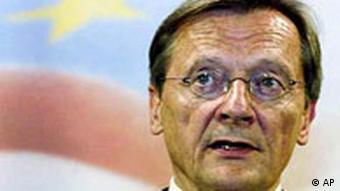 Crucially, Chancellor Wolfgang Schüssel says he's prepared to work with the new party. "It certainly seems possible," he said. "We will consider the possibilities but yes it can work."

But the chancellor said he would neither exclude nor confirm the possibility of a new election. A meeting with Austrian President Heinz Fischer has been scheduled for Tuesday and this could determine the future of the government.

What seems clear is that the old Freedom Party has split into two distinct groups: the new Alliance for the Future -- a moderate group lead by Jörg Haider, and the old Freedom Party which is likely to be led by a member of the far right, and which will continue to espouse a hard line on issues such as immigration and asylum.

Austria's outspoken nationalist Jörg Haider looks set to return to national prominence after winning a tough reelection as governor in the state of Carinthia on Sunday. (March 7, 2004)

Controversial Austrian politician Jörg Haider has returned to lead his Freedom Party shortly ahead of new parliamentary elections. But polls indicate the right-wingers won't repeat their success of three years ago. (Sept. 12, 2002)

No Surprises as Haider U-Turns Again

In a move that reflects his favored leisure activity, Austria's most infamous bungee-jumper Jörg Haider has bounced back from his decision to quit politics to continue his controversial career. (nov. 26, 2002)