The Greens set to form coalition with conservatives in Saarland | Germany| News and in-depth reporting from Berlin and beyond | DW | 11.10.2009

The Greens set to form coalition with conservatives in Saarland

The German state of Saarland is set to be ruled by the country's first coalition of two parties from the right and the pro-environment Greens. The kingmaker Greens chose this coalition over a more left-leaning grouping. 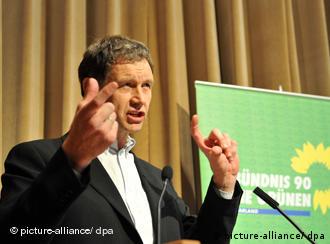 At a party meeting in Saarlouis on Sunday, party members voted 117 to 32 to move forward with a coalition with the center-right Christian Democrats (CDU) and the pro-business Free Democrats (FDP). Earlier, the head of the Saarland Greens, Hubert Ulrich, indicated his preference for the conservative coalition. This move by the Greens will keep the CDU's Peter Mueller in power as state premier even though his party lost its absolute majority on August 30.

The Left party, which partly is rooted in the former communist part of East Germany, did particularly well in the state of Saarland, and together with the SPD had the same number of seats as the the CDU and FDP. That gave the Greens, with just 5.9 percent of the vote, the chance to determine the state's next leader.

But coalition negotiations were rocked on Friday when Oskar Lafontaine, national chairman of the Left party, announced he was giving up his post as leader as well as his seat in the Bundestag, the German parliament. Lafontaine indicated he would be interested in becoming more involved in Saarland if his party were to end up part of the ruling coalition there.

But during the Greens meeting in Saarland, Ulrich made it clear that Lafontaine's move further cemented his disinterest in working with the Left part. "I don't trust this man or this party at all," said Ulrich.

Ulrich also said a coalition with conservative parties would mean the Greens would not always be expected to join left-leaning coalitions.

Should the Greens eventually form a government with the center-right CDU and FDP, the new Saarland government could set a precedent for national politics. With an increasing number of smaller parties in the German parliament, future collations are likely to depend on more cooperation between parties that traditionally would seem rather at odds with each other.

Left party chairman Oskar Lafontaine has given up his post as leader of his party's parliamentary group and his seat in the Bundestag. The move has huge implications for left-wing politics in Germany. (09.10.2009)

As calls mount for a policy change, the Social Democrats (SPD) in Thuringia have decided against a shift toward the Left party. Instead they have opted for a governing coalition with the Christian Democrats (CDU). (01.10.2009)

German voters on Sunday handed Chancellor Angela Merkel a second term in office and a mandate to form a new government with her preferred partner, the pro-business FDP. (28.09.2009)