Merkel set to head new center-right government | News and current affairs from Germany and around the world | DW | 28.09.2009

German voters on Sunday handed Chancellor Angela Merkel a second term in office and a mandate to form a new government with her preferred partner, the pro-business FDP. 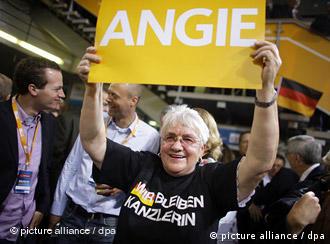 Provisional results show that German Chancellor Angela Merkel's conservatives have won 33.8 percent of the vote, putting them on course to form a government with their preferred partners, the pro-business FDP.

The Free Democratic Party (FDP) captured a record 14.6 percent of the vote. 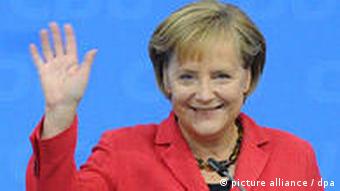 This gives the center-right alliance, with over 48 percent in total, a narrow majority over the Social Democratic Party (SPD) and the two other major parties, the Greens and the Left, both of which increased their share of the vote.

The result puts Merkel on track for a second term at the helm of Europe's largest economy. It also allows the chancellor to end her awkward four-year "grand coalition" with the SPD, which has frustrated her efforts to push through economic reforms.

Speaking to euphoric party members in Berlin on Sunday, a beaming Merkel said she had reached her goal of creating a stable center-right majority.

"I want to be the chancellor of all Germans so that we are all better off - especially in the midst of a crisis," Merkel said. "We have a lot of problems to tackle in this country," she added. 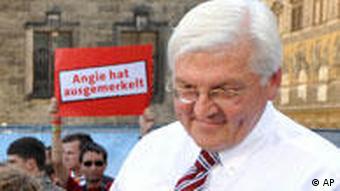 The SPD won just 23 percent of the vote. This marks their lowest score in the post-war era.

He said his party would be "vigilant in opposition."

The opposition Green party won 10.7 percent - up from 8.1 percent in the last election. The Left party also raised its share of the vote, winning 11.9 percent.

The 14.6 percent captured by the reform-minded FDP is the best result in the party's history. The party has been out of power since 1998. The FDP champions sharply lower taxes, less regulation and friendliness to private enterprise. 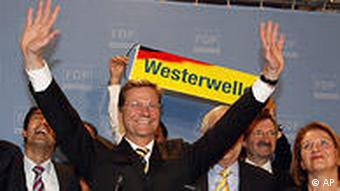 "We want to be part of the government," FDP leader Guido Westerwelle told cheering supporters at his party's Berlin headquarters.

Westerwelle spoke of a "big responsibility" and said his party would work to ensure that Germany got a "fair tax system and better education opportunities" and that civil rights were respected.

The election comes at a crucial time for the German economy, which is just emerging from its deepest recession in 60 years.

Security had been tightened throughout the country on election day in the wake of a series of warnings by Islamic militants, including one from al Qaeda leader Osama bin Laden. The messages called on Germany to pull some 4,200 troops out of Afghanistan.

Germans voted in on Sunday a new center-right alliance between Chancellor Merkel's conservatives and the pro-business FDP. Business leaders hope the new government will steer the country out its worst recession. (27.09.2009)

Guido Westerwelle has led his pro-business FDP to the best election result in the party's history. The FDP is set to govern with Chancellor Merkel's conservatives in a center-right government. (27.09.2009)

Political analyst Gerd Langguth on the outcome of the German election (27.09.2009)