The German capitulation tangle | Germany | News and in-depth reporting from Berlin and beyond | DW | 01.01.1970

When did WWII end? While children in Germany are taught it happened on May 8, historians aren't so sure. But it's not just historical confusion that has led the world to mark the occasion on different days till today. 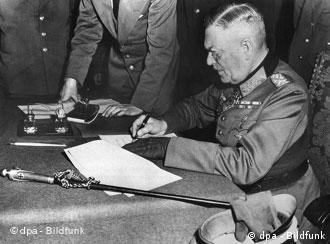 German Field Marshal Keitel signed the surrender treaty, but when?

Germany first capitulated in Reims, France on May 7, 1945 and then a day later in Berlin -- or was it actually May 9? Russia in any case does celebrate the end of the Second World War on May 9, while the West insists on doing it on May 8.

The only thing that everyone does agree on is where the war ended: in the officer's mess in Karlshorst, a suburb of eastern Berlin. The Russian hosts couldn't find a central location for the signing of the treaty in 1945 due to the massive destruction caused by the war bombs and the recently-concluded battles and the building in Karlshorst was one the few that was still left intact. Thus, this is where the German delegation signed the capitulation treaty.

The only question is -- when?

Today, it's difficult to imagine that a crucial chapter of world history was once played out in this upscale neighborhood in eastern Berlin. The Soviet battle tanks and cannons, which were displayed in the garden as the historic place was turned into a "museum of capitulation" during Communist East Germany, seem unnerving. 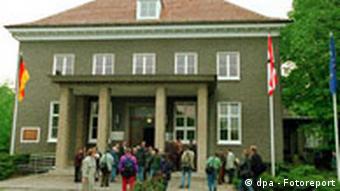 The German-Russian Museum at Karlshorst

Today, the place is home to the German-Russian Museum -- the only one worldwide where former war enemies are jointly commemorating the war. The room, where the capitulation treaty was signed, has been meticulously preserved down to the smallest detail.

Musuem head Peter Jahn knows only too well all the tangles, legends and disputes surrounding German capitulation. "The war ended at 11.01 p.m. Central European Time on May 8, 1945. That's a legally binding fact," said Jahn. The time is documented on the capitulation treaty.

But, in reality, the German delegation led by Field Marshal Keitel hadn't even entered the hall in Karlshorst at 23.01 p.m. on May 8. "The ratification was actually postponed by 75 minutes," said Jahn -- which means it took place on May 9. "There were technical reasons for the delay," Jahn added.

Apparently, the Russian text was delivered incomplete to Berlin and lacked a few sentences. The Germans waited more than an hour to receive the complete text and finally after midnight Keitel's delegation entered the room to put their signatures on the capitulation treaty -- more than an hour after its conditions had already entered validity.

"Whether one pegs capitulation to May 8 or May 9 -- that's not just a question of belief," said Jahn. 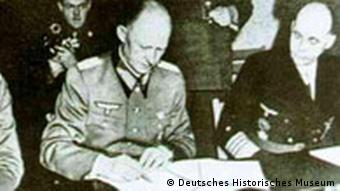 German General Jodl signs the surrender treaty at Reims on May 7, 1945

But, that's exactly what the Allied powers did. After the end of the Second World War and during the ensuing Cold War, a subtle battle broke out to hijack historical perspectives. In the western conscience, Germany had capitulated in Reims on May 7 (photo) -- with formal effect on May 9 at 12:01. The scene in Karlshorst was perceived as a propaganda move staged especially for Stalin.

From the Soviet perspective, the first capitulation was merely part of "temporary protocol."

It's true that there's no doubt about the validity of the May 7 capitulation -- even the Soviets accepted it and informed German troops via flyers about the signing of the surrender treaty and the date of the cease fire.

But, at the same time the Allies insisted in Reims that the document had to be ratified in the presence of the Soviet high command by the commander-in-chief of the German army.

The renewed and publicly symbolic second capitulation was more than a gesture for the Soviet Allies. In Reims, the treaty was signed by a mere general, Alfred Jodl, without the authoritative presence of a commander-in-chief. That wasn't enough for the Allies who still had bitter memories of the signing of the ceasefire at the end of the First World War. 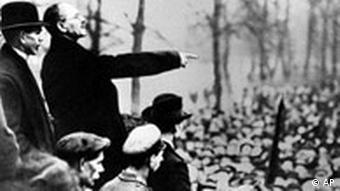 Karl Liebknecht speaks to the masses during the German revolution of 1918-1919.

In November 1918, the surrender treaty was signed by a civilian politician and a relatively unknown general. German Field Marshal Hindenburg could thus declare thereafter that the German army didn't really capitulate but were stabbed in the back by " a dagger thrust of a revolution," referring to the outbreak of turbulent events in Germany in November 1918 which were triggered by a mutinous revolt of German sailors in the northern city of Kiel and soon spread to other parts of the country, culminating in the declaration of a republic and the abdication of the German emperor.

The personal signature of the German commander in chief was thus important to the Allies to avoid a repeat of any further such "revolution" and "betrayal" legends.

Nothing really happened on May 8

At 12:20 early on May 9, the German delegation left the room in Karlshorst after inking the capitulation treaty. "Only then was it finally complete," said Jahn. The tense atmosphere in the room, it's said, suddenly dissolved after that. German officers instructed their troops to drop their weapons and Stalin announced to Russian citizens on the morning of May 9 that the war was finally over.

Since then, Russia has been commemorating the end of WWII on May 9 -- it's probably historically more correct than the West since nothing really happened on May 8, 1945.

France Saturday marked the anniversary of the unconditional surrender of Nazi Germany, which took place in the early hours of the morning 60 years ago in a school used as the supreme allied headquarters. (May 7, 2005)

"A New Start for Germany and Europe"

As Europe commemorates VE Day, British professor Sir Ian Kershaw, one of the leading authorities on 20th century German history, talked to DW-WORLD about the end of the war as a new beginning for Germany and Europe. (May 8, 2005)