The fiber optic cables that deliver your internet can also detect earthquakes | Science | In-depth reporting on science and technology | DW | 04.07.2018

Seismographs are highly sensitive devices, and they do a good job of registering earthquakes at specific locations. But fiber optic cables — the data lines that delivered these words — can do much, much better. 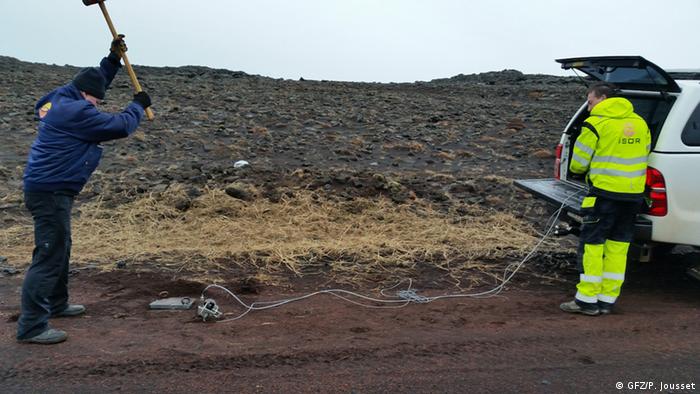 GFZ Researchers test the reaction in a fibre optic cable and in seismometers with a sledge-hammer.

A trembling needle moves slowly over a roll of paper. If a truck rumbles by, the amplitude gets stronger. If an earthquake occurs — or if someone sets off an atomic bomb underground — the needle will vibrate even more, registering the strength and duration of the event.

This is how seismographs have worked for centuries.

Nowadays, seismometer data isn't recorded on paper. The information is transferred directly to computers worldwide in a matter of seconds, at which point earthquake researchers can analyze it.

As interconnected as it all sounds, though, a weak point remains: The seismometers are usually located at huge distances from one another, all across our globe — often hundreds of kilometers apart. Scientists are then forced to reconstruct the location and magnitude of an earthquake from the records of the nearest seismometers.

This can lead to inaccuracies.

On the peninsula of Reykjanes in Iceland, they sent laser pulses through a 15-kilometer (nine-mile) data transmission cable that is used for telecommunications there.

This cable runs over a known fracture zone between the American and Eurasian continental plates. In order to obtain comparative data, the researchers also installed a dense network of seismometers in the area.

But what they saw using the cable surprised them.

"Our measurements using fiber optic cables depicted the ground far more accurately than ever before," Jousset reported. He added that it was as if a seismometer had been installed every four meters.

Read More: Why an eruption of Bali's Mount Agung is so dangerous 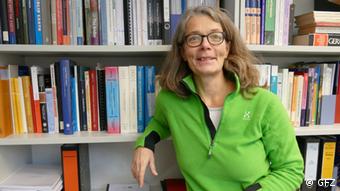 So how does it work?

"When producing the glass fibers, non-homogeneities remain in the cable," said geophysicist Charlotte Krawczyk, who was involved in the work. "We take advantage of these disturbances, because light is reflected at these points when we send a laser pulse."

In other words, natural kinks in the cable scatter light pulses in a stable, consistent pattern. If the length of the glass fiber changes during an earthquake, the positions of those scattering centers change relative to one another. These tiny differences can be measured by seismologists.

The data from the glass fiber method even revealed further fracture zones and slow soil deformations that lasted several minutes. Detecting such movements is not possible with conventional seismometers.

Though the method is not completely new — physicists have been using fiber optic cables to monitor oil production in wells for years, says Krawczyk — it could nevertheless completely change geological research. 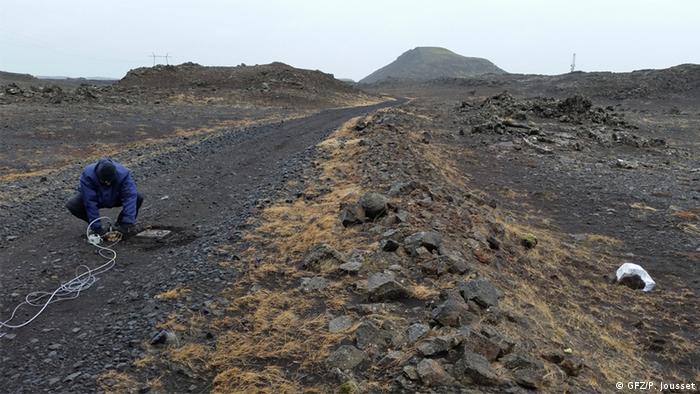 This is because there are already networks of fiber optic cables all over the world, laid underground and under the sea by telecommunications companies.

The geophysicists estimate that this new method could make it possible take a particular cable and examine up to 50 kilometers of its length for seismological activity.

A wealth of highly precise data could thus be obtained, particularly in urban centers that are highly threatened by earthquakes, such as San Francisco, Istanbul, Mexico City or Tokyo. There are also numerous communication cables in remote regions as well, meaning the fiber optic method could be used there, too.

The technology is also cost-effective. To perform the measurements, the geophysicists only need to use a single fiber from a huge communication cable. Beyond the earthquake data gained from the cable's movements, scientists could also detect changes in water pressure due to wave movements during storms, for example.

That said, the widespread use of fiber optic cables as seismometers will certainly not come overnight. Installing the devices will require negotiations with telecommunications companies and investments in the equipment itself.

Krawczyk hopes, however, that the technology could prevail throughout the entire world in the medium term.

Elon Musk's SpaceX has delivered a pair of satellites into orbit that will measure subtle fluctuations in the earth's gravity. The German Center for Geosciences and NASA jointly funded the mission. (23.05.2018)

Earthquakes are very common in Iran and Iraq. That's where the Eurasian and Arabian Tectonic plates meet and where the Zagros mountain range developed – the location of the latest quake. (13.11.2017)