'The dinosaurs were a little bit unlucky'

Think dust cooled the planet, and that's why the dinosaurs were obliterated? The author of a new study sheds light - or rather darkness - on how the sulfur-rich Yucatan peninsula helped deliver the death knell. 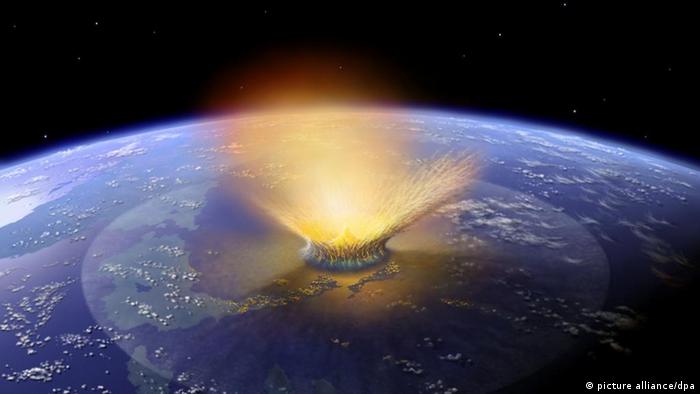 My daughter keeps asking why the dinosaurs died, and I've been telling her that an asteroid hit the Earth and threw a lot of dust into the air, and that's why the plants couldn't grow anymore so the dinosaurs got hungry and went to sleep and never woke up. (She's four). But that's not exactly right, is it?

During the last few years, some research has shown that there was not that much dust, or dust of the right size, that was thrown into the air. But there was sulfur. And then the sulfur in the atmosphere developed into sulfur aerosols. And they can cool down the Earth and block the light.

What's the sequence of events? A six-mile asteroid slams into the Earth - then what?

In the short term, there was probably an earthquake, there were tsunamis, there was fire. This is something we can't explore with our climate model … [Then] there's a really, really strong cooling. And that's a very fast reaction. So the dinosaurs have almost no light reaching the Earth in the year after the asteroid struck, just two percent of the sunlight that had reached the Earth before the impact.

So for one whole year, it's night time.

Yes, there's almost no light. So it must have been very dark.

So we're in year three, the coldest of all. How cold is cold?
Before the impact, it was a little warmer than it is today, because during the late Cretaceous 66 million years ago we had a CO2 concentration of about 500ppm, which is higher than today. It was about 19 degrees Celsius [66 Fahrenheit]. Then it cooled to about -8 degrees [18].

I made the mistake of showing a Youtube video to my daughter that I hadn't watched before, and it showed the asteroid hitting and all of this stuff - dust, dirt, whatever - getting ejected into the upper atmosphere, where it then began to burn up. And then everything got so hot that the dinosaurs basically burned to death - specifically, two triceratops. Is it safe to say that didn't happen?

I think that happened locally. So perhaps in the 1,000 kilometers around the spot where the asteroid hit the Earth. But the dinosaurs did not live in that location alone. What we observed was a mass extinction, which does not only include the dinosaurs but many other forms of life as well. And this was global. This happens because the sulfur aerosols are distributed globally very quickly.

So I have to tell my daughter that the dinosaurs burned to death and froze to death. 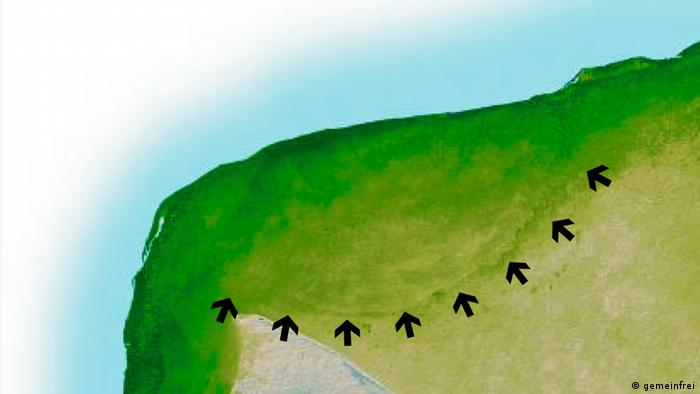 The Chicxulub impact site on the Yucatan peninsula in today's Mexico

Was that particular asteroid carrying a bunch of sulfur? Or is the sulfur event something that's going to happen with the next impact as well?

The asteroid didn't carry the sulfur. It hit a target that had a lot of sulfur. And this is something special. The dinosaurs were a little bit unlucky that the asteroid hit the Earth at that spot. If there were an impact in the future, it would perhaps not be like that. Not every place on Earth has that much sulfur.

Julia Brugger is a PhD student at the Potsdam Institute for Climate Impact Research.

Sulfur aerosols have been proposed as a geoengineering solution for global warming.

Asteroid 2013 TX68 hitting Earth would be bad, but this lot could wipe us out too

When scientists recalculated Asteroid 2013 TX68's orbital path, they said it had little chance of hitting Earth on March 8. Good job we've still got viruses, A.I., climate change and aliens to worry about. (07.03.2016)

Scientists say they have found the world's largest asteroid crater in central Australia. The chance finding suggests a twin-asteroid struck the Warburton Basin over 300 million years ago - with devastating effects. (24.03.2015)

It's one thing to land on a comet. But to meet an asteroid, grab a sample, and bring it back to Earth - that's a whole new dimension. NASA's OSIRIS-REx Asteroid Sample Return Mission aims to do just that. (07.09.2016)