Thailand's prime minister has declared a state of emergency in the beach resort of Pattaya and the surrounding province after anti-government protesters stormed a regional summit. 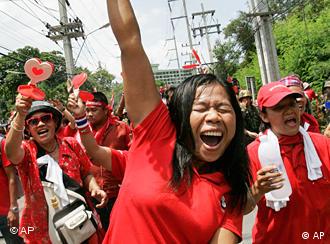 The summit between delegates of the Association of Southeast Asian Nations (ASEAN) and six dialogue members was also called off, after hundreds of demonstrators broke into the luxury hotel hosting the meeting on Saturday.

"The government has a duty to take care of the leaders who will depart from Thailand," Prime Minister Abhisit Vejjajiva said in an address on Thai television.

"In this extremely serious situation, the government has decided to impose a state of emergency in Pattaya and Chonburi to deal with the situation."

Foreign leaders were being evacuated by helicopter.

Ahead of the summit, the Thai government had made assurances that it would take whatever measures necessary to prevent such a situation. Officials have now acknowledged that security forces had failed to do just that. 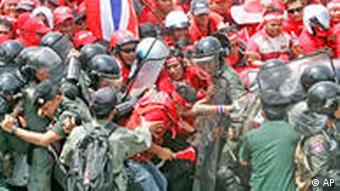 Protest leader Arisman Pongruangrong said, "We want to find Prime Minister Abhisit Vejjajiva to tell him he cannot be prime minister any more.

“We want to tell him that if he holds an election and wins fairly then we will accept him. Now he is illegitimate and we cannot stand for this.”

The “Red Shirts” protesters said they will remain inside the hotel until Abhisit resigns and claim they stormed the building after three fellow supporters were wounded in earlier clashes with pro-government demonstrators.

Prime Minister Abhisit has repeatedly resisted calls to step down despite days of anti-government protests, both in Bangkok and at the summit.

Summit meetings between ASEAN and ministers from China, South Korea and Japan had been delayed earlier by clashes between anti-government and pro-government supporters. Thai officials said talks would be held in about two months' time.

Flights have begun landing in Thailand as thousands of anti-government protestors ended their occupation of Bangkok's two airports, lifting a week-long siege that crippled the country's tourism and exports sectors. (03.12.2008)

Moldovan President Vladimir Voronin has called for a full recount of Sunday's parliamentary election, which was marred by claims of voter fraud. He claims it will help restore stability to his country. (10.04.2009)

Georgia's opposition said it would launch more protests and block streets in the capital Tblisi, after President Mikheil Saakashvili ignored calls to resign. (10.04.2009)