Thai police seeking have descended on the country's largest Buddhist temple in their hunt for an influential monk charged with embezzlement. The case highlights a major religious and political division. 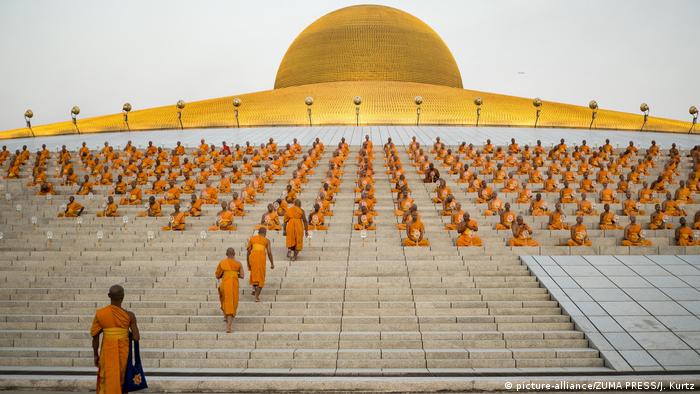 Thai security forces on Thursday entered the highly controversial Wat Dhammakaya temple complex in their effort to arrest Phra Dhammachayo, who has not been seen in public for months.

The former abbot is thought to be in hiding inside the temple, which is famed for its sci-fi architecture. Previous attempts to arrest 72-year-old Phra have been thwarted by his many supporters, who surrounded the site in his defense.

Ex-Prime Minister Yingluck Shinawatra has told a court that the controversial rice subsidies helped boost the rural economy. She denies charges of failing to stem losses from the multibillion-dollar program. (05.08.2016)

Wat Dhammakaya, on the outskirts of Bangkok, is the base of a breakaway Buddhist order that conservative adherents of the religion allege encourages a "buy-your-way-to-nirvana" philosophy.

The sheer size and style of the temple, at 1,000 acres (400 hectares) nearly 10 times the size of Vatican City and boasting a central stupa resembling a golden flying saucer, is considered an affront to many conservative Buddhists.

So too is the order's approach to recruiting converts. The sect has its own television channel aimed at winning new followers and is accused by some Thais of using spells to bewitch those who attend the temple.

"We are sealing off the temple and after that we will search all the buildings," said Colonel Paisit Wongmaung, chief of the Thailand's Department of Special Investigation.

Instead of risking confrontation, Prayut has himself urged the monk to "come out and fight the case."

Many of the ultra-nationalist monks who criticize the Dhammakaya movement played a key role in protests against former Thai Prime Minister Yingluck Shinawatra.

The temple is said to have links to Yingluck's brother Thaksin Shinawatra, who was ousted in a 2006 military coup amid accusations of embezzlement. Yingluck was also toppled in a military coup, in 2014.

The temple denies any political affiliations, claiming to have become a pawn in the battle between the Shinawatras and their rural supporters and Bangkok's military-allied elite.