Thailand’s Election Commission has said that a poll planned for next week should not go ahead after another weekend of bloodshed. Voting officials said the controversial election should be delayed by at least one month. 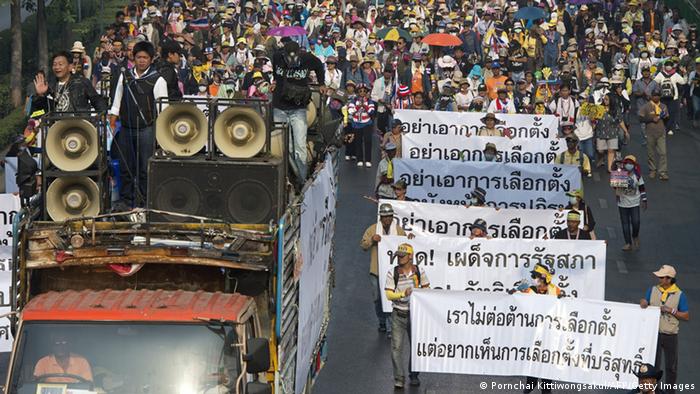 The commission said on Monday it would meet Prime Minister Yingluck Shinawatra to press for a delay after further violence at the weekend.

Elections had been planned for February 2, although the opposition has said it will boycott the poll. On Friday, the Thai Constitutional Court ruled that a delay would be possible - if both the commission and Yingluck agreed. Election Commission representatives were scheduled to meet the premier on Tuesday.

"As election officials, it is our job to make sure elections are successful, but we also need to make sure the country is peaceful enough to hold the election. We don't want it to be bloody," commission member Somchai Srisutthiyakorn told the Reuters news agency on Monday.

Somchai said that while a month to resolve the political deadlock might not be sufficient, the delay should not be for too long. He added that the commission was opposed to the idea of an unelected "People's Council" being put in charge to administer reforms ahead of a national election at a later date. The reforms would be aimed at tackling the perceived dominance of Yingluck's family in public life.

Despite ongoing violence, the prime minister's ruling Puea Thai party is said to be opposed to any delay. It is predicted that the party would win the election by a significant majority.

Protesters on Sunday prevented some 440,000 people from taking part in early voting. A protest leader was shot dead, while 13 other demonstrators were injured in clashes, Bangkok's Erawan Medical Emergency Center said.

Protest leader Suthep Thaugsuban has said his supporters planned to "close every route" to polling stations next Sunday.

The latest violence has raised fears that the dispute could turn to civil war and force the military to step in. The army has been involved in 18 actual and attempted coups in the past 80 years, but it has so far resisted intervention this time around.

Unrest grew in November last year, when Yingluck's government tried to force through an amnesty bill that would have allowed her brother Thaksin Shinawatra to return to the country. Thaksin, who opponents say is Puea Thai's de facto leader, was handed a jail sentence in 2008 for corruption - a charge he claims is politically motivated.