Thailand's army chief has said the military is taking control of the government. In a televised address, Gen. Prayuth Chan-ocha said the army intends to restore order and enact political reform itself. 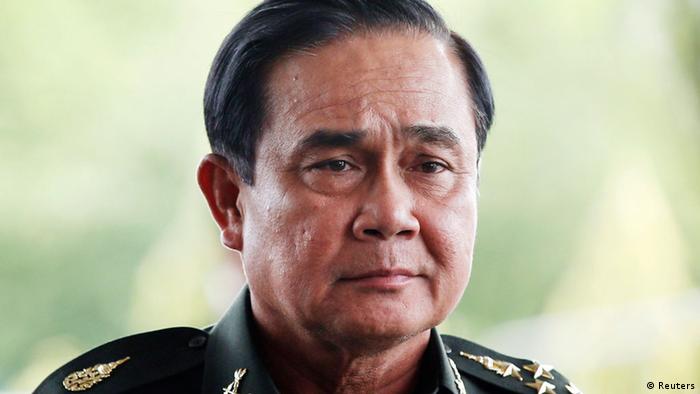 Thailand's army chief Gen. Prayuth Chan-ocha has said the military will take control of the government until political reforms are introduced.

"In order for the country to return to normal quickly the National Peace-Keeping Committee comprised of the army, the Thai armed forces, the Royal Air Force and the police need to seize power as of May 22 at 4.30 p.m." Prayuth said in a televised address, flanked by heads of the various services.

Prayuth said the measure had been taken after attempts to resolve the crisis politically failed.

Rival Thai political leaders, Jatuporn Prompan of the pro-government "Red Shirts" and anti-government protest leader Suthep Thaugsuban, were reported to have been taken away from a meeting ostensibly aimed at forging consensus on Thursday. It was initially unclear if they had been detained.

The 60-year-old Prayuth said he seized power because of "the violence in Bangkok and many parts of the country that resulted in loss of innocent lives and property and was likely to escalate."

"All Thais must remain calm and government officials must work as normal," he said.

The Thai military on Tuesday said it had declared martial law amid mounting violence between pro-government, anti-establishment protesters and their opponents. However, the military had then denied that its actions amounted to a coup d'etat, claiming instead that it had acted only to restore order.

A senior army official told the Reuters news agency on Thursday that the army would be deployed to help escort demonstrators away from protest sites.

Prayuth Chan-ocha also chaired an inconclusive Wednesday afternoon meeting between pro- and anti-government representatives. The country's caretaker Prime Minister Niwattumrong Boonsongpaisan - who earlier called for fresh elections - was invited but did not attend.