Renamo, Mozambique's largest opposition party, has cancelled the peace accord it sealed with the ruling Frelimo party in 1992. Earlier, government troops captured Renamo's military base in the Gorongosa region. 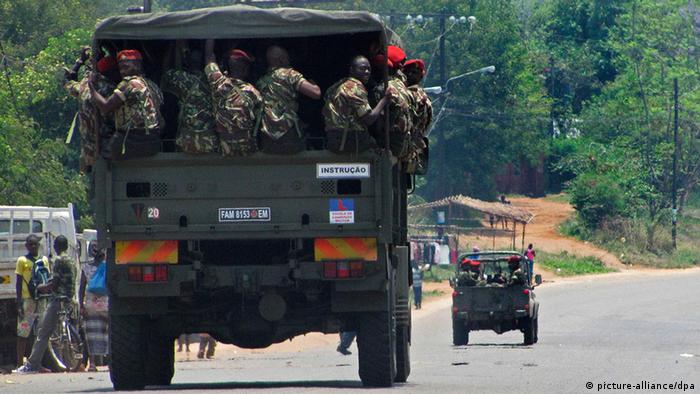 During the civil war in Mozambique from 1976 to 1992, it was known as the Tete Run. This was a highly dangerous road route linking Malawi and the Mozambican port of Beira along which Renamo (Mozambique National Resistance) rebels frequently ambushed cars and trucks.

After 21 years of peace, the streets of the Mozambican city of Tete could also once again be fraught with danger. Renamo has annulled its peace accord with Frelimo, the ruling party and its erstwhile civil war opponents.

On Monday (21.10.2013) government troops seized Renamo's Sathunjira base after bombarding it with heavy weapons. But Renamo leader Afonso Dhlakama was no longer there. He retreated into Gorongosa mountains last year when he began retraining several hundred guerrilla fighters. That was where Renamo maintained their Casa Banana base during the civil war. 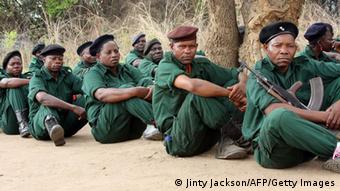 Afonso Dhlakama escaped Monday's attack, but he retaliated by cancelling the peace treaty. Renamo spokesman Fernando Mazanga told Deutsche Welle that the attack on Dhlakama's base was a declaration of war, because it was an offensive launched by the army. "Afonso Dhlakama is fighting to survive. We end this peace agreement," he said.

Tension between Renamo and Frelimo has been rising since the 20th anniversary of the peace accord in October 2012. In April of that year, Renamo fighters raided a police station in Sofala province, a Renamo stronghold in central Mozambqiue. Five people were killed. Renamo fighters also killed two civilians in an attack on a bus and a truck on a main highway. Since those attacks, militias can be seen guarding convoys as they drive along the only north-south road route in Mozambique.

As an opposition party, Renamo is critical of Frelimo's tight grip on the apparatus of state and wants to have a greater say in decision-making. Former German development consultant Rainer Tump was a frequent visitor to Mozambique this year and was taken by surprise by the sympathy shown by the population for the often very brutal deeds carried out by the opposition party. People he spoke to would mostly begin by saying "Of course, it's not right what Renamo is doing, but we understand their reasons because they have got their backs to the wall." Tump also said that Renamo has no chance of winning elections because they are rigged. "The president himself is largely to blame for this situation," he said.

President Armando Guebuza has been in power since 2005. In the meantime, Frelimo has tightened its control over state institutions. Civil servants are forced to join the party and the media are closely monitored. But it is not just Renamo that is objecting to such infringements, civil society has also been voicing criticism. 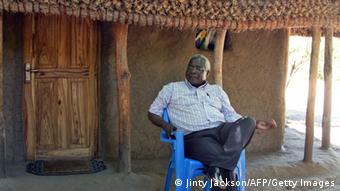 Mozambican journalist Rui Lamarques, head of news with the online paper @Verdade, believes the motive for the army's hunt for Afonso Dhlakama is Frelimo's desire to tighten its control over the country even further. "With the demise of Afonso Dhlakama, Renamo would fall apart and conditions in Mozambique would soon resemble those in Angola, where freedom is very limited," he said.

Lamarques does not believe the other opposition parties, or even new parties, would be strong enough to mount a serious challenge to Frelimo's hold on power. This would also be beyond the reach of Renamo voters. "If Dhlakama were to die, other parties would be permitted to take part in elections, but they would be so weak that the ruling party would be able to continue governing more or less indefinitely," he said..

The conflict between Renamo and Frelimo flared up over municipal elections planned for November 2013. In a row over the composition of the state elections panel, Renamo has threatened to boycott the poll.

Rainer Tump said Renamo has been severely disadvantaged in past elections. He believes the international community should have intervened on Renamo's behalf during the second of the 1998 presidential elections at the very latest. "There was massive electoral fraud. Hundreds of thousands of votes in the Renamo strongholds were declared invalid," he said. Tump also said that nobody apart from a few Scandanavian countries called for an inquiry into the election results. "Frelimo learnt the following lesson in those days: We are an emerging nation. We can get away with such things. The international community wants stability so we will continue to rig the elections," he said. 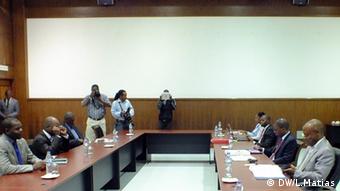 It is hardly likely that Renamo could return to the military strength it possessed durig the civil war. Yet any military conflict would cause great damage to the Mozambican economy which is currently expanding at around 7 percent a year.

This applies particularly to the coal industry. The Brazilian giant Vale and the British firm Rio Tinto have invested billions of dollars in Mozambique. Transporting coal out of the country for export, they are dependent on highways and rail lines that run through Renamo strongholds in Sofala province. The price on coal on the world market has dropped and moving it along roads like the Tete Run or rail links like the Linha de Sena could prove too expensive and too dangerous for profitable export enterprise.

Mozambique's main opposition group is reported to have attacked a police station in an escalation of tensions in the country. This comes a day after Renamo announced it was withdrawing from a two-decade old peace deal. (22.10.2013)

In Mozambique, rebels have blocked traffic along a key artery and a mining company has suspended coal exports. And now, the friction between former civil war foes threatens to worsen. (27.06.2013)

The coal rush in Mozambique