Technology can be used to spur business growth in developing countries, a UN agency says. The Internet, computers and mobile phones facilitate banking services and improve access to market information. 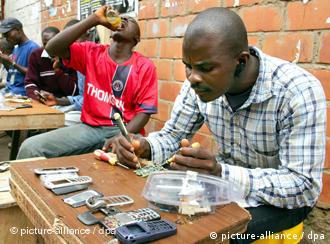 Cell phone use has expanded rapidly in Africa

But there are wide disparities across the African continent. In 2010, less than one in 10 Ethiopians had a mobile phone compared to more than seven in 10 Ghanaians, according to the International Telecommunications Union. This year, Ghana was reclassified by the World Bank as a lower middle income economy.

Enlarging the market by taking it to the poor

Despite Ghana's high mobile phone usage, ICT has yet to make a substantial contribution to the country's private sector development, according to the World Bank. It estimates 80 percent of the business sector is informal.

"The IT revolution [in Africa] is enabling smaller farmers to have access to information which they didn't have earlier, but not much has changed for larger companies," said Sebastian Kahlfeld, a senior fund manager at DWS Investments, Deutsche Bank's investment arm. 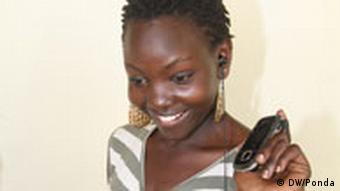 Mobile phones in particular are enabling access to services like banking and information, according Sebastien Dessus, the World Bank's lead economist for Ghana.

"In theory, [ICT] can play a role in enlarging markets because access to information improves and transaction costs are reduced," he noted.

Farmers now use mobile phones to obtain market information on the latest prices for their crops. In Ghana, cashew nut farmers can use a phone application to compare trader bid prices. And since 2008, the Ethiopia Commodity Exchange has granted farmers access to real-time information via text messages, electronic display boards and a website.

Kenya's mobile banking system, M-Pesa is bringing banking services to millions. The service has 20,000 agents in the country compared to 400 for the largest bank, according to UNCTAD ICT analysis chief Tobjoern Fredriksson.

Apart from providing banking services, ICT has also helped create employment for thousands since it was launched in 2007. The service, which was developed for person-to-person transactions, is now being used by small entrepreneurs to carry out payments, Fredriksson said.

Technology helps but is not the only solution

But technology is not only good for enlarging the market and empowering small-scale businesses, it can also be used to fight corruption, according to UNCTAD. ICT improves transparency and accountability, said Johan Hellstroem, a researcher at Swedish Program for ICT in Developing Regions.

"The very presence of mobile phones decreases corruption and secret activities because it leaves footprints and audit trails," he added.

Corruption is third leading constraint to doing business in a country after electricity and tax rates, according to a 2010 World Bank survey.

Crowdsourcing techniques like Kenya's Ushahidi can be used to report incidents of bribes or corruption. Similar initiatives are springing up all over Africa; with stopthebribe in Nigeria, and No bakshish in Cameroon. Through such initiatives and global ones like bribespot and corruption tracker, ICT is empowering people to take a stance against corruption, according to Transparency International (TI). 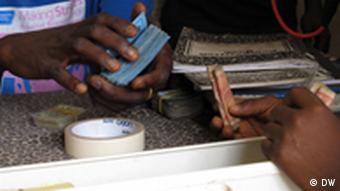 Bribes are often needed get something done in African countries

The platforms are providing means of discussing corruption and mobilizing people while providing them with ways to avoid paying bribes, said TI spokeswoman Natalie Baharav. But challenges remain.

"An integrated approach that includes an offline approach is needed," Baharav said, noting that Internet access was still very low in most countries.

For Hellstroem, the challenge is changing people who are corrupt.

"It's the users who are corrupt and they are the part of the corruption that is hard to address," Hellstroem said.

Experts can only speculate on the extent that ICT will have on private sector development in Africa or other developing countries. For investors, it is the current financial climate that matters.

"If you aren't certain about European banks, then you are not going to invest in a Nigerian bank," said Kahlfeld of DWS Investments. "Global stability is essential for investors to invest in African markets."

Africa is the fastest-growing market for mobile communications after Asia. Manufacturers offer more and more low-cost phone models for emerging markets, as demonstrated at the IFA consumer electronics show in Berlin. (06.09.2011)

Bribespot, a new app from a Lithuanian software developer, allows users to 'crowdsource' reports of global corruption and make more people aware of incidents of bribery. (20.05.2011)