An oil tanker laden with explosives has been detonated at a checkpoint in southern Baghdad. Police sources say at least 15 people were killed. Other waiting vehicles were also set ablaze. 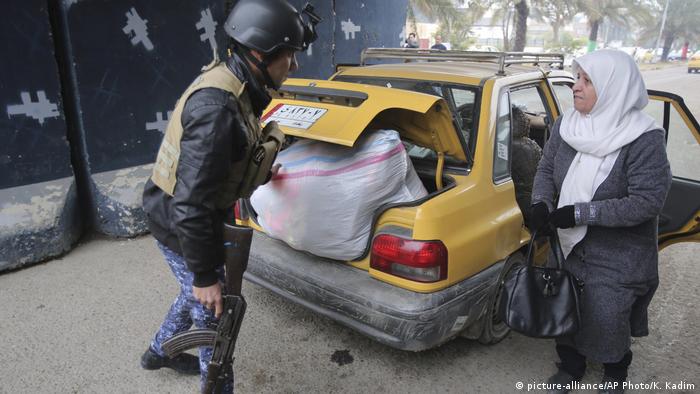 A car being checked in southwestern Baghdad

Security and hospital officials said three policemen were among those killed by Wednesday's suicide bombing at the southern entrance to the Iraqi capital.

Police sources said between 40 and 60 other people were wounded. Most of the victims were civilians.

The website of the Iraqi broadcaster al-Sumaria put the death toll at three killed.

It said the affected area, Saytarat al Ramel, had been cordoned off by Iraqi security forces.

There was no immediate claim of responsibility for the incident which follows similar fatal blasts previously claimed by the militia "Islamic State (IS)."

It occurred as Iraqi government forces pressed their assault on some 2,000 IS fighters holding out in western Mosul, the last IS stronghold in Iraq.

Iraqi and US-led coalition officials have repeatedly warned that the IS will likely revert to insurgent acts as it loses territory in both Iraq and neighboring Syria.