Syrian refugees priced out of camps, turned away at border | Middle East | News and analysis of events in the Arab world | DW | 14.06.2015

With few other options, Syrian refugees in Lebanon are forced to live as second-class citizens with ever greater restrictions on their daily lives. Anna Lekas Miller reports from Jaharriyeh refugee camp. 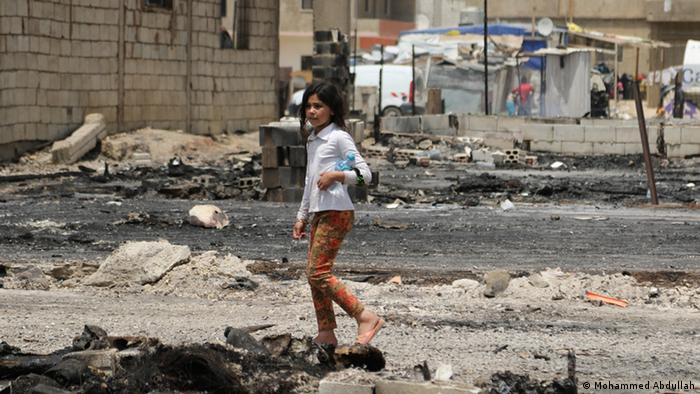 Nestled in Lebanon's Bekaa Valley, the area now known as Jaharriyeh Camp used to be uninhabited fertile fields outside the aptly named West Bekaa town of al-Marj, meaning meadow. Now it is a dusty encampment of UNHCR and UNICEF-branded plastic tarp tents housing hundreds of Syrian refugees, many of whom have been living here for two years or longer.

At the beginning of June, a fire seared through the camp, burning 160 tents housing 600 people, killing at least four and injuring dozens. Although it is thought to have started as an ordinary cooking fire, the blaze quickly engulfed several of the surrounding closely packed tents, burning homes, shops, a school and an arts and cultural center to the ground.

Twenty-four hours later, the smell of burning still hangs in the air. Freshly baked bread from the day before is now blackened, though still neatly stacked. Inadvertently cooked eggs rot on the ground, gathering swarms of flies. A young girl is searching through what little remains of the school for her books. A child eats a burnt potato.

Nadia is crouched on the floor of a makeshift shelter that survived the fire, staring in shock at what used to be her home.

"I used to work here as a baker, but now everything is gone - our shop, our salary, our papers."

She talks quickly, gesticulating with her hands - which are blackened from digging through the rubble. 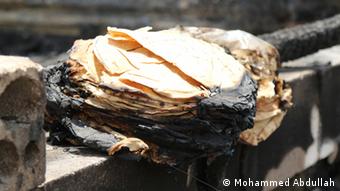 "We left Syria for this?" she asks, incredulous.

A seemingly ordinary accident, the scale and destruction of the fire is inextricably linked to the infrastructure of the camp - one of dozens of UNCHR-administered refugee settlements scattered across Lebanon's Bekaa Valley to the East and the Akkar region to the North. The tents are flimsy structures built from plastic tarp that flooded and froze easily in the winter, and could burn easily in the summer. With an average of at least five people living in one tent, and barely any space between tents, disaster-preparedness is not a high priority. This level of population density coupled with any kind of emergency situation means chaos.

Although Lebanon is home to more than one quarter of the now four million refugees who have fled Syria, the Lebanese government is still reluctant to establish formal refugee camps, a policy inspired by the strain the influx of Palestinian refugees that fled to Lebanon following the creation of Israel have had on the country. For the refugees, this means that, unlike refugees living in officially recognized camps in other countries, they are expected Refugees pay the high price of Lebanese cost-cutting (Al Jazeera)to pay rent for their accommodations, no matter how ramshackle and unsuitable the structures.

Their cost of living depends on luck alone. While some landowners have allowed refugees to stay for certain amounts of time for free, others have taken advantage of their situation, gauging prices beyond their means. Because of this, certain families have been forced to go back to Syria.

Turned away at the border

However, one of the biggest human rights violations is not happening in the camps, but at the border - where, on January 5, the Lebanese government instituted a visa requirement that would require all Syrians crossing the border to provide information about the purpose and length of their stay, a drastic policy shift from the traditionally open border. Although certain outstanding humanitarian cases are allowed entry, the vast majority of Syrians who now wish to seek refuge from the war must prove that they are tourists, students, business operators or in need of medical treatment.

"We know that people who have legitimate asylum claims are being pushed back," Amnesty International Senior Crisis Advisor Lama Fakih told DW. "This is a violation of Lebanon's international obligation to not push back or deport anyone who fits the refugee definition."

Once in Lebanon, staying is nearly impossible without violating the several restrictions placed on refugees. In order to renew ones residency, one must pay an annual fee of $200 (178 euros) and sign a pledge not to work - an unsustainable combination of demands for most Syrians living in Lebanon. If one fails to renew their residency, or, as is happening in an increasing number of instances, has their request to renew their residency denied by the Lebanese authorities, they have no choice but to live unlawfully - and risk detention - or return to Syria. 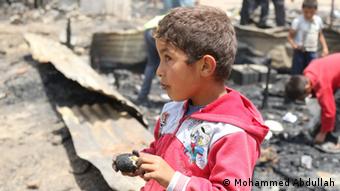 The fire in the camp underlined how vulnerable the refugees are

"It also restricts their access to basic social services," Fakih continued, pointing out that proper documentation is needed to access education, healthcare, and to approach the police. "For example, a person that is here without documentation risks detention by trying to report a crime to the police."

Without being able to access social services, or legally work, more and more Syrians in Lebanon - whether they are living in makeshift camps in the Bekaa Valley or renting apartments in Beirut - are forced to navigate a difficult system as second-class citizens. Although the Lebanese government has repeatedly appealed to European Union countries, and other Western nations to open their borders, allowing more refugees to claim asylum, the international community has so far given asylum to 90,000 refugees - less than 2.2 percent of those living in the main host countries neighboring Syria. Most of the Syrians who have managed to reach Europe have been smuggled by boat - a dangerous undertaking that has claimed almost 2,000 lives so far this year.

With no safe and legal passage to Europe - and no stable situation to return to in Syria - most Syrian refugees have no real options but to continue living precariously in Lebanon.

Sectarian fighting in northern Lebanon's Tripoli long predates the violence in Syria. Yet, as violence presses on in Syria, locals say they are "tied to the map" of the region. Patrick Strickland reports from Tripoli. (10.04.2015)

'To keep the Syrian uprising going, you must survive'

In today's Syria, there is no room for the Arab Spring ideals of the country's 2011 uprising. But they've survived all the same. DW met a young woman who backed the armed opposition as a means to a free Syria. (03.04.2015)