A duck or pair of ducks have been caught by the same speed camera flying at more than 20 kilometers per hour over the limit. The feathered felons are still at large. 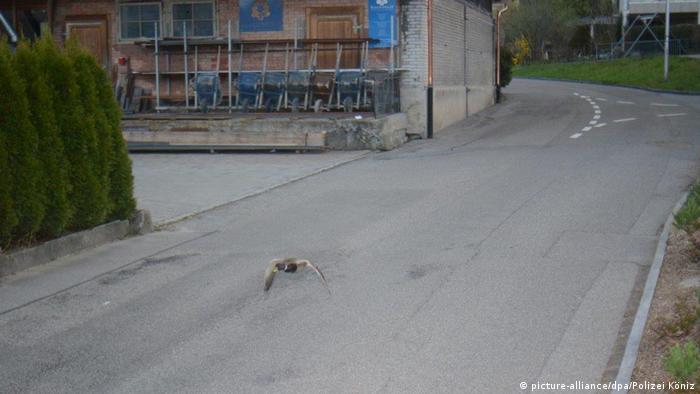 A speed camera in western Switzerland has snapped a duck twice within a period of three days, Swiss police said on Friday.

The camera in Köniz, a municipality southwest of the city of Bern, picked up the first offense as a duck shot through the air 22 kilometers per hour (13.5 miles per hour) over the speed limit for vehicles.

"The duck was traveling in a low-altitude flight at 52 kilometers per hour in a 30-kilometer zone," local police said in a statement accompanying a picture of the airborne speed fiend.

But police said they could not determine whether it was a repeat offender or whether they were dealing with a flock of felons.

The duck or ducks were lucky to escape a hefty bill. Exceeding the speed limit by 22 kilometers per hour in a built-up area in Switzerland can result in an official police complaint, a fine and a minimum one-month driving ban.

The alpine country calculates fines based on the offender's wealth. In 2010, it billed a Swiss driver some $290,000 for clocking 137 kilometers per hour in an 80-kilometer zone.

Users of the imageboard website 4Chan have launched their own comedic fight against "Islamic State." Images of IS militants have been replaced with the faces of rubber ducks and their guns with toilet brushes. (29.11.2015)

The funeral of Queen Elizabeth II: An unprecedented police operation in London 19.09.2022

London is at standstill for the Queen's funeral as the biggest police operation in UK history unfolds. Sertan Sanderson reports from the British capital.

A new study has found Switzerland's glaciers have lost half their volume since 1931. The process is showing no sign of slowing down with researchers saying glacier retreat is "accelerating."