Three people were injured as police fired warning shots at rioters in the eastern city of Norrkoping. The unrest had started after a far-right politician threatened to burn a copy of the Quran. Three people were injured when police fired warning shots into a crowd of rioters in eastern Sweden on Sunday, local media reported.

The country has been rocked by days of violence triggered by far-right Danish-Swedish politician Rasmus Paludan.

The newspaper Aftonbladet said the incident took place in the city of Norrkoping when police moved in to disperse a group of people who were throwing stones at officers.

The group of counter-demonstrators had gathered after Paludan said he would hold a rally in the city on Sunday.

In a statement on its website, the local police wrote how officers had "fired several warning shots" after coming under attack.

"Three people seem to have been hit by ricochets and are now being cared for in hospital," the statement added. "All three injured have been arrested on suspicion of committing criminal acts."

Several vehicles were set on fire as the violence unfolded and at least 11 people were detained, Aftonbladet said.

Riots also broke out for the second time in the city of Linkoping, where Paludan also planned a rally on Sunday.

Linkoping was the scene of similar disturbances by counter-demonstrators three days earlier.

Aftonbladet described how the situation quickly escalated as hundreds of people, mainly youngsters, arrived on the scene. It said 14 people were arrested.

During an interview with Aftonbladet on Sunday, Sweden's Justice Minister Morgan Johansson told the rioters to "Go home, immediately."

While labeling Paludan a "right-wing extremist fool, whose only goal is to drive violence and divisions," Johannsson said that "Sweden is a democracy and in a democracy, fools also have freedom of speech."

"Those who attack the police are criminals. There is no other way to deal with them than to put up a hard fight," he insisted. 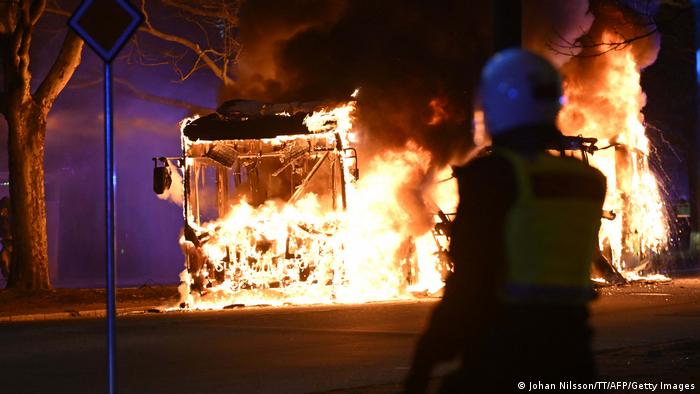 In Malmo, a bus was torched but fortunately passengers escaped uninjured

On Saturday, a bus and a number of other vehicles were set on fire in the southern city of Malmo over rallies by far-right extremists.

And on Friday, nine police officers were injured in similar clashes in Orebro in central Sweden.