Studying in Jena: A paradise for students

With only 100,000 residents, Jena is rather small but has a lot to offer. Every fourth person here is a student, and in the fields of biotechnology and optical electronics, Jena is on the international forefront. 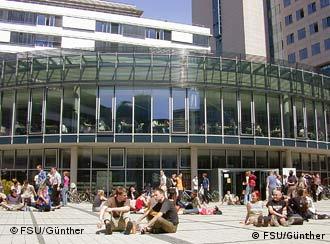 Most people who come to Jena by train alight at what is probably Germany's most beautifully-named station: Jena Paradies or Jena Paradise. And even though this city on the river Saale may not exactly be the Garden of Eden, it does have some heavenly things to offer. In just a few minutes, you can get from the train station to the city center and to the central university campus. Nothing here is very far away and most places can be reached on foot or by bike. The university itself is modern and international. In each recent year, around 700 new foreign students enrolled here. Business studies, medicine and German as a foreign language are especially popular courses.

Every fourth Jena resident is a student at one of the city's two universities. The majority studies at Friedrich Schiller University, which has ten faculties. Meanwhile, several thousand prospective engineers and scientists study at the Jena University of Applied Sciences. Over 25,000 students are enrolled at Jena, with the small city firmly in their grip - a perfect situation for young people.

Many new ideas and innovations have emerged from Jena over the centuries, and countless patents still get registered here today. This is one of the strengths of the university, which was founded in 1558 on the banks of the Saale and which is the only comprehensive university in the Free State of Thuringia. With big names like Goethe, Schiller, Hegel, Fichte, Schelling, Haeckel, Abbe and Zeiss to its credit, the university presents itself today as a modern institution whose scientists stand at the forefront of research in their respective fields.

A city of innovation

The Beutenberg campus in the west of the city enjoys a special reputation that goes beyond German borders. Ten renowned institutes, including Leibniz-Gemeinschaft, Max-Planck-Gesellschaft and Fraunhofer-Gesellschaft, as well as 50 private businesses have come together here to become a unique research network. This includes almost 2,000 staff members - mostly physicists, chemists and biotechnologists - who work on new innovations. In addition, long-established companies like Carl Zeiss, Schott and Jenoptik and world-leading companies in the areas of optical digital technology and electronics are based in Jena. For students and postgraduates this means one thing: Jena is a paradise for research internships during and after university, as well as a good stepping stone into the working world.

Short official channels within the university and between the individual research institutes, close contacts between students and teachers, well-equipped labs and libraries - that's the university's recipe for success. And this is exactly why students choose to enroll here. The spaces fill up quickly.