Study: Obesity cuts life expectancy by up to 10 years

A study has found that being overweight can cut life expectancy by between one and 10 years. The findings contradict evidence of an "obesity paradox," which indicated that overweight people did not die sooner. 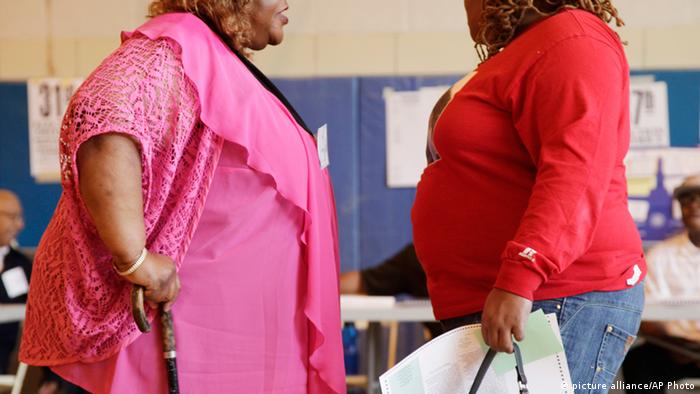 The study pointed to evidence that the risk of death before an individual's 70th birthday grew "steadily and steeply" along with a broadening waistline.

The study, published in The Lancet, a leading UK medical journal, found that moderately overweight people lost about a year of life expectancy on average, but that mortality soared in those with more serious weight problems.

The study used data from almost four million adults on four continents, which was sifted through by a large team of international researchers.

WHO: Diabetes cases in adults quadrupled since 1980

Almost four times as many adults live with diabetes when compared to known figures from 1980. A global World Health Organization report noted sharp increases in cases in low- and middle-income countries. (06.04.2016)

The information, described as the largest-ever pooled dataset on being overweight and mortality, was gathered from 239 large studies conducted between 1970 and 2015 in 32 countries in North America, Europe, Australasia, and southern and eastern Asia.

The team excluded current or former smokers, as well as those who had chronic diseases at the beginning of the studies.

Another of the authors, Richard Peto of Oxford University, said that being obese was far more dangerous for men than it was for women. Obese men have higher fat levels and risk of diabetes than women with a similar Body Mass Index.

A number of recent studies had indicated that obesity might not be as detrimental to life expectancy as previously thought, because of protective benefits that corpulent people enjoyed against certain diseases.

The World Health Organization (WHO) estimates that some 1.3 billion adults worldwide are overweight, while a further 600 million are obese. In Europe, the prevalence of adult obesity is 20 percent, while the amount rises to 31 percent in North America.

Earlier this year, the WHO warned that levels of child obesity were rising at an alarming rate, particularly in developing countries.

Many African parents wrongly believe that having overweight children symbolizes affluence in society. Nutritionists are now seeking to educate them on the health risks posed by obesity and being overweight.

More than two-thirds of people hospitalized with COVID-19 still suffer symptoms a year later, UK researchers have said. Women and obese people are most at risk of long COVID.

The latest figures put pollution on par with smoking in terms of global deaths. In comparison, COVID-19 killed about 6.7 million people globally since the pandemic began.