Study: inclusion of special needs children on the upswing in German schools

The number of children with special needs in inclusive schools has reached its highest level ever, a new study has found. However, there is a great disparity between Germany's federal states. 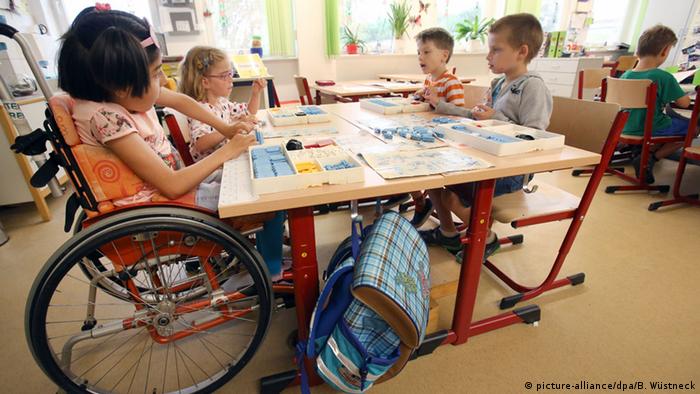 A study published by the Bertelsmann Foundation on Thursday shows that inclusion of disabled children in schools reached its highest level in the 2013-14 school year since the introduction of the UN Convention on the Rights of Persons with Disabilities. According to the study, 31.4 percent of children with special needs attend a mainstream school.

The foundation, based in Gütersloh, Germany, reported the increase from merely 18.4 percent during the 2008-09 school year.

Despite this progress, however, handicapped children still face a less than satisfactory situation at schools in Germany. The number of students in schools exclusively for children with special needs has hardly gone down, and "there is no nationwide discussion of improving opportunities for inclusion," said the study.

Inclusion drops off in high schools, some states

For the 2013-14 school year, 67 percent of children with special needs were in mainstream daycare centers, 46.9 percent in elementary schools and only 29.9 percent at high schools.

Significant differences were also apparent between Germany's different federal states. The city states of Bremen, Hamburg and Berlin all reported relatively high rates of inclusion - 68.5 percent, 59.1 percent, and 54.5 percent, respectively - but in bigger states like Hesse and Lower Saxony, the rates were lower than 24 percent of total children with special needs.

"Too often collaborative learning fails from a lack of infrastructure or teacher training," said foundation board member Jörg Dräger.

The study added the caveat that, at the same time, inclusion seems unevenly spread across the country and the number of children being recognized as having special needs has gone up. Bertelsmann reported that between 2008 and 2014, the number of handicapped children in the country went up for 6 percent to 6.8 percent, creating "significant challenges" for the educational system.

Ulla Schmidt, who is vice president of Germany's parliament and chairwoman of the "Lebenshilfe" organization for people with disabilities, stressed the need for a new educational campaign to make inclusion a priority in every part of the country. "That is the only way children, in all their diversity, can be our future," said Schmidt.

Educational inclusion slowly on the rise in Germany, study shows