Berlin Technical University has awarded a doctorate to an 88-year-old man whose studies were obstructed by the Nazis, the weekly newspaper Die Zeit reported Wednesday, Nov. 19. 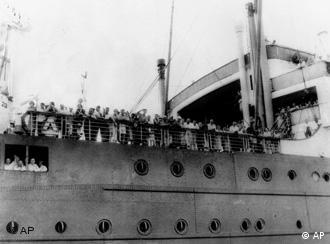 Dimitri Stein submitted his thesis on electrical engineering in 1943 but university authorities refused him an oral examination because he had Jewish ancestry.

His professor arranged a hiding place for him and he survived World War II by emigrating to the United States where he worked as an academic and engineer before going into business.

Stein said he asked if he could take the examination in the 1950s but received a rude rejection from the university. When he asked again in 2006, professors admitted they were ashamed of the long-running episode and set to work to right the old wrong before it was too late.

Earlier this month Stein answered probing questions about his thesis with the examiners assessing his work in the context of state-of-the-art engineering knowledge from the 1940s. Stein passed.

The university's chief, Kurt Kutzler, presented the doctorate in person.

German investigators handed over Monday what they said was adequate evidence to try a former Ukrainian, Ivan John Demjanjuk, for Nazi war crimes. He was a former death camp guard now living in the US. (10.11.2008)

Germany Compiles List of Nazi-Era Jews and Their Fates

After four years of detailed research, the most complete list to-date of Jewish residents living in Germany between 1933 and 1945 has been handed over to the Yad Vashem Holocaust Memorial site in Jerusalem. (23.10.2008)