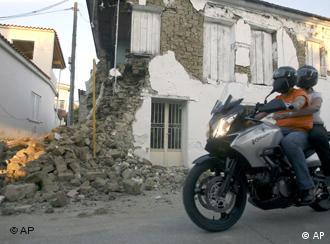 Many homes were damaged in the quake

The epicenter of the quake was put at 54 kilometers (33 miles) south of the port city of Patras, some 150 kilometres west of Athens, but was felt throughout Greece.

The village of Kato Achaia appeared hardest hit by the tremor. Panicked residents ran into the streets and some jumped from their balconies when the quake struck at 3:25 p.m. local time.

One man was killed when the roof of his house collapsed, firefighters said. In the same village, an 80-year-old woman died of a heart attack after being injured during the quake.

At least four people, including a nine-year-old girl who had been trapped among collapsed houses, were rescued soon after the quake. Authorities said most of those hospitalized after the quake had sustained only minor injuries.

Strongest quake in many years

"My thoughts are with our fellow citizens who are suffering," said Prime Minister Costas Karamanlis, who cut short a trip to Vienna because of the quake.

George Stavrakakis of the Athens Observatory's Geodynamic Institute said the quake was "the biggest recorded in the region" in a long time.

The quake was also felt in southern Italy, across the Ionian Sea from Greece, Italian officials said no one was hurt and no damage was reported.

Greece experiences more seismic activity than any other country in Europe, accounting for half of the continent's recorded quakes.

The Chinese government has welcomed foreign aid in the wake of the earthquake that caused serious damage in the south-western province of Sichuan. The death toll had reached nearly 12,000 on Tuesday, May 13. (13.05.2008)