At least two people were killed when a 6.7 magnitude quake struck the Greek island of Kos and Turkey's Aegean coast, sending tourists out to the streets. USGS put the epicenter near the Turkish resort of Bodrum.

Rescuers were checking for people trapped indoors on the Greek island of Kos after a powerful earthquake killed two people and injured at least 120 others early on Thursday. At least one building collapsed during the 6.7 magnitude tremor.  The island's port was damaged, as well as the 14th-century fortress at the port's entrance and the local mosque.

Greek authorities say the two people killed on Kos were men, one from Sweden and one from Turkey, and that they were crushed to death by falling stonework in an area with a busy nightlife. 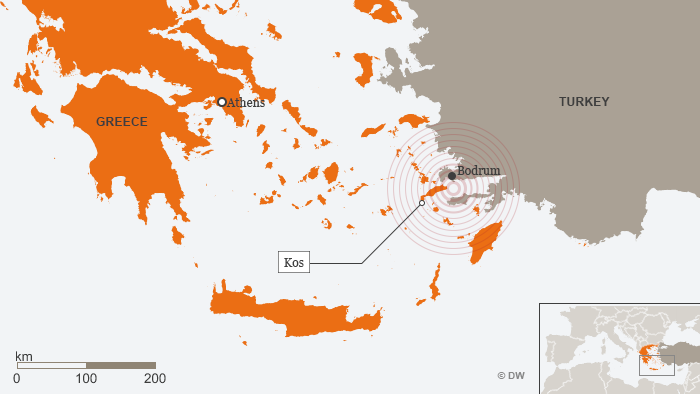 The Paris-based European-Mediterranean Seismological Centre (EMSC) warned that the quake caused a "small tsunami" and urged the people in the area not to go near the beaches. Social media users posted images of flooded streets on the island.

Kos resident Christopher Hackland, who works for a diving company on the island, told DW what happened as the quake struck.

"We were woken by the quake, instantly jumping out of bed and not knowing what was going on.  I have a roommate and we made our way toward the kitchen where the door of the apartment is."

"It felts as if the walls were moving and with the loss of balance it felt as if the world was trying to turn upside down on us. The way the floor was shaking, every step was a challenge."

"From the hotel opposite the apartments we began to hear children screaming and crying - a lot of panic."

Hackman said most residents in his resort decided to stay outside for the rest of the night.

"There are worse places to camp out for the night," tweeted German reporter Michael Heun with the Berliner Kurier.

Regular aftershocks were reported after the main tremor.

Injuries, cracks and flooding in Turkey

Footage from Bodrum and nearby areas showed crowds of residents and tourists outdoors who had rushed out off buildings in fear of falling debris.

Local media reported that almost 80 people in the Turkish resort were injured, several of them by jumping out of windows in panic. Bodrum's district governor, Bekir Yilmaz, was quoted by the daily Hurriyet as saying that wounded were being treated in the garden of the local hospital, as the quake had slightly damaged the hospital's ceiling. 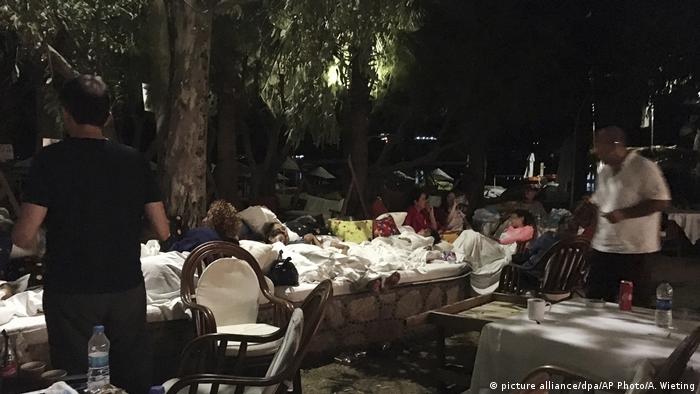 Tourists in the area reported at least two strong aftershocks

"The biggest problems at the moment are electricity cuts in certain areas (of the city)," Bodrum mayor Mehmet Kocadon told NTV television. "There is light damage and no reports that anyone has been killed." 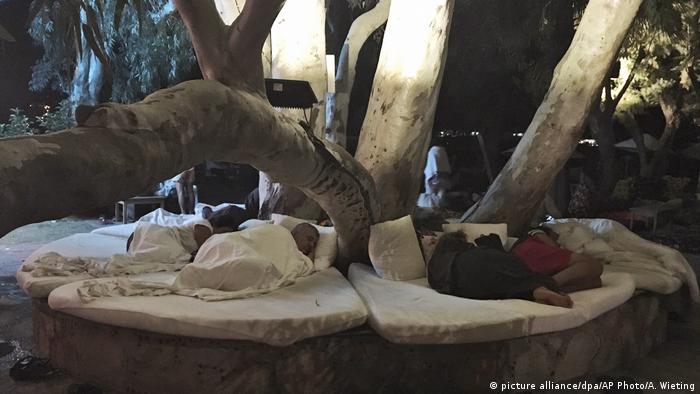 Hotel guests sleeping outside in Turkish resort town of Bitez, near Bodrum

"The bed shook a lot. Some bottles fell and broke in the kitchen and the patio," said Turkish pensioner Dilber Arikan, who has a summer house near Bodrum. "I screamed, I was very scared because I was alone."

The border areas between Turkey and Greece are often hit by earthquakes, with the last major seismic event killing one woman on the island of Lesbos in June.

At least two people were killed and 120 injured when a 6.7 magnitude quake hit the Greek island of Kos and Turkey's Aegean coast, sending tourists onto the streets. (21.07.2017)