Two typhoons off Asia have forced long-distance swimmer Ben Lecomte to suspend his attempt to swim across the Pacific. The Frenchman returned to port in Japan, but remains "as determined as ever" to complete the feat. 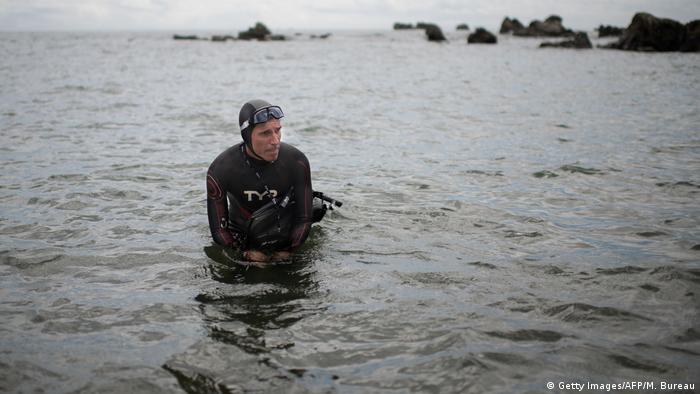 French-born swimmer Benoit Ben Lecomte broke off his bid to become the first person ever to swim across the Pacific Ocean due to bad weather, a media company tracking his progress, Seeker, reported on Wednesday.

"Two typhoons, Jongdari and Wukong, have interrupted his momentum and forced the ship to head back to port in Japan - a development that reflects the difficulty of the journey and the unpredictability of the ocean," they said.

However, the 51-year-old athlete "is as determined as ever to forge ahead with his historic trans-Pacific journey," according to Seeker's online post.

Lecomte started on his 8,850 (5,500) journey in early June, with the goal of reaching San Francisco in six to eight months. However, he only crossed around 800 kilometers in last four weeks, swimming eight hours a day.

A yacht has followed Lecomte along his route, alongside a smaller support boat, allowing him to rest and eat during his hours off.

Taking on the Pacific after beating the Atlantic

Seeker said Lecomte was still focused on his task, despite returning to Yokohama.

"The weather, there's nothing I can change about it," Lecomte was quoted as saying. "I'm not going to stress about it. I'm not going to put thought into it. It is what it is, and that's all."

The company did not say when Lecomte might resume his trip.

Read more: Campaigner to brave sharks and debris on Pacific swim for the environment

In 1998, Lecomte became the first person to swim across the Atlantic Ocean, completing the journey in just 73 days.

Before starting his 2018 feat, Lecomte said he wanted to draw attention to the pollution threatening the world's oceans. His planned route would take him past the Texas-sized garbage patch which floats between Hawaii and California.